The New York Times recently reviewed an impressive new exhibit at the Frick Collection in New York City of the paintings of 15th century artist Piero della Francesca. The Frick exhibit is a rare opportunity for art lovers to see these seven paintings in one location in the United States. The Times article praised the beauty and charm of della Francesca's artworks.

But what is not mentioned -- and is never mentioned in art criticism -- is that della Francesca's paintings, typical of other Medieval and Renaissance artworks, are distortions and misrepresentations of biblical history. They fail to convey accurately who Jesus, his family, and community were: dedicated, orthodox practicing Jews. The two centerpieces of the Frick exhibit, Piero della Francesca's altarpiece painting Virgin and Child Enthroned with Four Angels and the large polyptych Sant'Agostino altarpiece, like the bulk of Medieval and Renaissance paintings, transform working-class Galilean village Jews into fair-skinned, blond, Northern European latter-day Christians. They are depicted in palatial settings with latter-day Christian saints, angels and anachronistic artifacts, without a trace or hint of their Jewish identities.

In my new book, Jesus Uncensored: Restoring the Authentic Jew, I argue that these pervasive distortions established a powerful platform for anti-Semitism by feeding the illusion that Jesus was a Christian in contrast to the Jews -- the others who "persecuted" him. Fact is that Jews were the sole body of Jesus' followers, and they were all from the same Semitic tribe.

I first realized the power of these distortions when I viewed Mary Magdalene Encountering the Risen Jesus by famed Italian Renaissance artist Fra Angelico (1394-1455). The fair-skinned blonds, Jesus and Mary Magdalene, with halos in shimmering light seem almost comical as representation of first-century Jewish Semites. I wondered how typical this painting was of other Medieval and Renaissance paintings. To answer that question I did a walking tour of the Renaissance galleries of the Metropolitan Museum of Art. What I discovered was so consistent and shocking that a brief commentary became a major chapter.

In every gallery I was surrounded by paintings that featured a cast of characters and lavish settings that bore no resemblance to the world that Jesus and his followers inhabited. Every wall greeted me with blond, fair-skinned European figures; portraits of John the Baptist and other contemporaries and disciples of Jesus, all with classical Roman features, some carrying crosses and often embedded in anachronistic settings with latter-day Christian saints.

For example, in Neroccio de Landi's 15th century Madonna and Child with Saints Jerome and Mary Magdalene, Jesus, Madonna, and Mary Magdalene are noticeably milk white. The presence of a Christian saint completes a picture alien to its original Jewish setting. Nearby, Madonna and Child with Saints Francis and Clare, by Cima da Conegliano (1459-1517), not only features the anachronism of saints, but also depicts the uncircumcised infant Jesus holding a crucifix. Jews and Christians in the first century hated the cross; it was a reminder of the crucifixion of untold numbers of Jews. In fact, the cross didn't become a Christian symbol until the fourth century, when it was introduced by the Pagan Roman Emperor Constantine for his military banners. That's why it is puzzling that in Bartolomé Esteban Murillo's 17th century painting, The Baptism of Christ (Staatliche Museen in Berlin), John the Baptist is holding a large crucifix staff as he baptizes Jesus. The Gospels tell us clearly that John only baptized Jews to purify them so they could receive the teachings of the Torah and prepare for the coming of the Jewish Messiah. With exposure to this type of ubiquitous fictitious imagery over the centuries, is it any wonder that so many people -- Christians and Jews -- still cling to false beliefs that Jesus was either born Christian or converted to Christianity -- and that he launched a new religion? 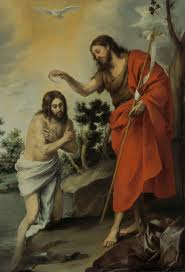 Compare the contents of these paintings with descriptions of Jesus by biblical scholars. Christian writer Jean Guitton, in his book, Great Heresies and Church Councils, makes it clear that:

Jesus did not mean to found a new religion. In his historical humanity, Jesus was a devout Israelite, practicing the law to the full, from circumcision to Pesach, paying the half-shekel for the Temple. Jerusalem, the capital of his nation, was the city he loved: Jesus wept over it. Jesus had spiritually realized the germinal aspiration of his people, which was to raise the God of Israel...

Here's how Anglican priest Bruce Chilton describes Jesus in his book Rabbi Jesus: "It became clear to me that everything Jesus did was as a Jew, for Jews, and about Jews." And former Catholic priest James Carroll, author of Constantine's Sword, asks, "If Jesus were alive today, would he be one of those fervent black-hatted figures dovening [praying] at the Western Wall [the remnant of the Jerusalem Temple]?"

These remarks are echoed by scores of other Christian and Jewish commentators who have affirmed that Jesus was dedicated to Judaism throughout his life. That explains why the term Jew appears 202 times in the New Testament, with 82 of those citations in the Gospels; the word "Christian" never appears in the Gospels, which span the life and ministry of Jesus. How could it? There was no such thing as Christianity during the life of Jesus. But that's not what Medieval and Renaissance artworks say.

Art historians gave me the facile explanation, "It was the Renaissance style to contemporize figures and settings." But a close scrutiny reveals that the "style" argument doesn't hold up. You will not see Aristotle, Homer, or Agamemnon holding a cross or kneeling in a church surrounded by Christian saints. But Jesus and his family appear exclusively as pure Christians. The "style" argument is also not reflected in Renaissance paintings that demonized Jews. Look at Albrecht Durrer's 16th-century painting, Christ Among the Doctors. The fair-skinned, ethereal-looking, reddish-blond Jesus is portrayed in sharp contrast to the Jewish scholars, who are dark, menacing, and ugly -- one looks almost sub-human.

The Christianization of art was also fueled by the nature of art as a business -- a highly competitive business as noted by New York Times art critic Holland Cotter: "Painting in Renaissance Italy was no picnic. In artist-packed cities like Florence, competition for jobs was fierce." To survive artists had to give patrons what they wanted -- and that meant total Christianization of artworks. Any inclusion of Judaism, or suggestions that Jesus was a dedicated Jew, would surely run you out of business, if not deliver you to the Inquisition.

Regardless of the reason for the ethnic cleansing of Judaism from artworks, the cumulative effect of the distortions shaped and conditioned the way Christians throughout history -- and even in modern times -- have conceived of Christianity, Jesus, Jews, and Judaism. Images are powerful in shaping perceptions. And wherever Christians turned, in homes, palaces, churches, and at celebrations, they were confronted with an inauthentic Jesus. Jesus the Jew was vaporized.

We generally think of anti-Semitic art as explicit stereotypes of Jews (anti-Semitism by commission), as was represented in a 2012 exhibit, "The Jew in Anti-Semitic Art," at the Wolfson Museum in Israel. The more than 600 pieces of art that were assembled over a 30-year period by 92-year-old Judaica dealer Peter Ehrenthal are mostly from the 19th and 20th centuries, when anti-Semitic posters and pamphlets, as well as other publications and objects, proliferated. But these works are transparent and often comical. Only the most rabid anti-Semites would take them seriously. For example, contrast the hideous caricature of French financier, vineyard owner, art collector, horse breeder and philanthropist Alphonse de Rothschild with an actual photograph of the elegant man.

As I've noted, this is anti-Semitism by commission. But anti-Semitism by omission can be even more potent. The ethnic cleansing of Judaism and the Christianization of Jesus in Medieval and Renaissance art established a classic setup for anti-Semitism: separate, exaggerate differences, and then demonize. This subliminal conditioning shaped Christian views of Jews and reinforced existing negative attitudes. Then the coup de grace label "Christ Killers" completed the persecution package. Looked at this way, Medieval and Renaissance art can be seen as providing an important missing link for understanding how anti-Semitism flourished throughout much of history.

Renaissance artists added the magnificent and powerful new dimensions of realism and naturalism to painting, in contrast to earlier artificialism and primitivism. Unfortunately, realism did not extend to representing figures as who they were in their real lives and in their actual settings. So, the next time you stroll through the Medieval and Renaissance galleries of a museum or view artworks from those periods in books and magazines, keep in mind the description of the real Jewish Jesus by Jean Guitton, Bruce Chilton, and James Carroll. It will be an entirely different experience!

Bernard Starr is a psychologist, college professor, and journalist. He is author of Jesus Uncensored: Restoring the Authentic Jew, which is available at Amazon (grayscale and color editions), Barnes and Noble, and other major outlets.