Note: This is the first of seven reviews of the Batman serials and movies that prefigure the current Christopher Nolan/Christian Bale cycle. For many, it'll be too much information. For others, it won't be enough. Apologies all around.

The chief problem with the 15-episode serial, Batman (1943), the second live-action version of a modern superhero, isn't the low-budget effects (Columbia serials were notoriously cheap), nor its racism (the chief villain is a Japanese spy during WWII), but the form itself, the serial form, which requires cliffhanger endings for its heroes. Since the lives of Batman and Robin (Lewis Wilson and Douglas Croft) hang by a thread at the end of every episode, and since the serial wasn't budgeted for a lot of extras, "America's greatest crimefighter," as Batman is called in the narrative intro, isn't that great a fighter. Among the cliffhangers: Two crooks throw Batman, arms and legs thrashing, off a roof. Three crooks toss Batman, arms and legs thrashing, down an elevator shaft. He drives a car off a bridge. He gets trapped in a fire he sets. Worse, he gets outpunched by two criminals or even one criminal. I'm talking ordinary guys in suits and fedoras. You think: What's the point of putting on cape and cowl if you can't take one guy? Isn't that a little embarrassing?

The serial begins well enough. The credits play over the famous bat logo (human head on bat body), while the ominous theme music (Wagner's "Rienzi Overture"?) prefigures Danny Elfman's from the 1989 version. Even the first shot of the "Bat's Cave," as it's called here (it was, in fact, introduced here), is cool. Batman sits brooding behind a desk of finely engraved oak while shadows of bats play against the wall.

Then the cheapness. Once the background narration ends, and the story proper begins, we see a plain black Cadillac pull up to a police phone, and out pop... Batman and Robin! So no Batmobile. Batman then phones a Capt. Arnold (no Comm. Gordon either) and tells him, in a vaguely British tone, "I have a nice little package for you. You'll find it at the corner of First and Maple." He leaves the crooks handcuffed to a light pole with bat stickers on their foreheads -- Batman's version of Zorro's "Z" -- then he and Robin drive off, Robin behind the wheel, and the two take off their masks and smile at each other.

The plot? Dr. Tito Daka, a Japanese spy whose headquarters lie through a secret panel in the Japanese Cave of Horrors in deserted Little Tokyo, wants to secure enough radium for an "atom-smasher gun" that will bring America to its knees. In this regard he employs disgraced scientists and various hoodlums to carry out his orders. If they balk ("No amount of torture, conceived by your twisted Oriental brain, can change my mind!" says one scientist), he simply turns them into super-strong zombies. It's part of the "everything but the kitchen sink" quality that, you imagine, Columbia hoped would appeal to 10-year-old boys in 1943. Hey, kids! Not just Batman and Robin but Japanese spies and zombies and alligators and invisible messages from Washington, D.C.! And yet somehow it's all excruciatingly boring. 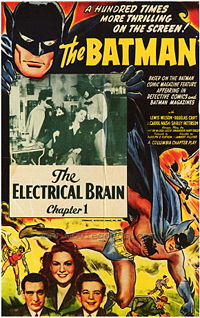 The writers, poor bastards, display some post-modern wit by commenting upon the very low quality of their own product. Two American mechanics, encountering Daka in the Japanese Cave of Horrors, think he's part of the program. "Pretty good, Saki," one says. "Your accent's a bit off but your makeup's perfect."

Better, they slip in a comment about the repetitive nature of the genre itself. Daka's minions keep trying to steal the necessary radium for the atom-smasher gun and Batman and Robin keep foiling them. Eventually Daka and his men focus less on the radium and more on getting rid of Batman. Because of the aforementioned cliffhangers, they assume they do, at the end of every episode, which leads to conversations like this at the beginning of every episode: "We didn't do the job, boss, Batman stopped us." "Batman? He's still alive?" "Yeah. But we killed him this time for sure!"

Eventually Daka decides that Batman can't keep escaping death this way; that there must be many Batmen, who are, he says, "all members of the same organization." It's not a bad bit. I think DC Comics even picked up on it for an issue.

These days, of course, this serial is less compelling as entertainment than as historical document -- and never more so than on the subject of race. In one episode, Bruce Wayne says of a friend, "Why, I haven't seen Ken in a coon's age!" In another, we get an Indian full of "Him say..." "Me say..." dialogue.

Daka is played by a Caucasian actor, J. Carrol Naish, who would be nominated for an Academy Award that very year for playing the Italian, Giuseppe, in the Humphrey Bogart vehicle Sahara, and who would, during his career, play every conceivable ethnicity -- from Sitting Bull in Sitting Bull (1954) to Charlie Chan in the 1950s TV series The New Adventures of Charlie Chan -- but he's hardly brilliant here. Those American mechanics were right about the accent. He sounds like Peter Lorre by way of Brooklyn.

Of course given Pearl Harbor, and Hollywood's track record with stereotypes before Pearl Harbor, one expects Daka's giggling sadism and unapologetic "So sorry" comments. One isn't particularly surprised when a crook, turning against Daka, tells him, "That's the kind of answer that fits the color of your skin!" One even laughs when Bruce Wayne's girlfriend, Linda Page (Shirley Patterson), encounters Daka and yelps, "A Jap!"

The eye-opener is what bookends the serial. In the first episode, when we first visit Little Tokyo, the narrator informs us:

This was part of a foreign land, transplanted bodily to America, and known as Little Tokyo. Since a wise government rounded up the shifty-eyed Japs it's become virtually a ghost street...

In the last episode, Batman, pinned in Daka's lair by his superstrong zombies, says to Daka, out of the blue, "I know who you are. We've been searching for you ever since you killed those two agents assigned to your deportation!"

Thus the entire serial is painted with the wisdom of deportation and internment camps. See what happens when you don't round up the shifty-eyed Japs? See the destruction that ensues? Decades later, the internment of Japanese-Americans became a source of national shame -- one of the dark spots in our democratic experiment -- and the original VHS release went so far as to excise these slurs, but they've been restored for the DVD. Good. If we don't know where we've been, we'll never know how far we've come.

Oh, and that atom-smasher gun? I think we built it and brought them to their knees.