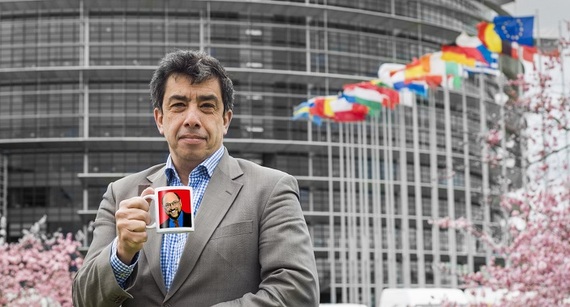 Photo by Pascal Bastien Fernando Morales-de la Cruz Founder of CAFÉ FOR CHANGE in front of the European Parliament in Strasbourg.

The European Union hosts the EU CELAC "Partnership" Summit in Brussels on June 10th and 11th. It brings together Presidents, Prime Ministers and Foreign Ministers of 61 countries and the EU institutions, that is the 28 members of the EU and 33 nations from CELAC - Community of Latin American and Caribbean States-.

The EU-CELAC meeting is promoted by the EU as the "Partnership" Summit , EU propaganda calls 2015 "the European Year of Development", Europe claims to be the largest donor of foreign aid but the insignificant shared value of every cup of coffee that is drank in the EU offices and throughout Europe is an appalling example of European understanding of: Partnership, Sustainable Development, Aid and Shared Value when dealing with its former colonies. I dare to affirm that the EU-CELAC Summit "Partnership" fails the most basic coffee test.

Less than €0.01 of every cup of coffee consumed in Europe helps eradicate poverty or achieve the SDGs in coffee producing nations. "Fair Trade" certifications supported by EU nations are not the solution, it is a shared value and supply chain issue. The brand "Fair Trade" in coffee translates into less than €0.002 per cup, that insignificant amount will never bring real prosperity to coffee communities.

This is extremely important because in Latin America more than 80 million people depend directly or indirectly, totally or partially, from the production of coffee. CELAC nations produce more than 50% of all coffee.

Because Europeans drink more than 700m cups of coffee every day and most coffee is imported as a commodity, the European coffee industry generates tens of billions of euros in added value, taxes and profits for EU nations, while in Latin America tens of millions live in poverty or extreme poverty in coffee producing regions. The contrast is nothing less than neocolonialism.

The supply chain of the coffee consumed by Europeans is socially unsustainable and exploitative.

The Nespresso consumed at the European Parliament in Brussels is one of the most extreme examples of lack of shared value. The parliament pays Nespresso about € 70 per Kg of coffee in turn the Nestle subsidiary pays the coffee farmers about € 3 per Kg of green coffee. This literally means that every time a Member of the European Parliament or Eurocrat drinks a coffee he or she is sending at least €0.11 to a Swiss bank account as profits for Nespresso and leaving less than 1 cent of euro to compensate the dirt poor coffee farm workers.

It is time for real EU-CELAC PARTNERSHIP as defined by the dictionary, not by Eurocrats. It is time for SHARED VALUE, not for false claims to aid the poor. The partnership should be evident in every cup since coffee is important for both the EU and CELAC. Coffee is only one case but there are many other EU imports where compensation by Europe does not consider cost of living wages or local taxes.

The question is: Will the European Commission, the European Parliament and the Council of the European Union ever adopt a REAL partnership model in every coffee?

Less than one cent per cup is not partnership. It is exploitative!

Fernando Morales-de la Cruz is creating @CAFEFORCHANGE and @10CentsPerCup to CHANGE THE EQUATION OF COFFEE to eradicate poverty in coffee growing regions.