The Republic of Armenia recently became the fourth country to join the Eurasian Union. This lesser-known entity is Vladimir Putin's response to the European Union and to perceived NATO encroachment, though Kazakhstan's President Nursultan Nazerbayev originally floated the idea of a trade bloc uniting countries from Eastern Europe all the way to Central Asia as far back at 1994. A customs union comprised of Belarus, Kazakhstan, and Russia has in fact been operating since early 2010. The Eurasian Union, which went into effect January 1st, now includes Armenia, Belarus, Kazakhstan, and Russia, with Kyrgyzstan to join in May. With a total population of almost 200 million people and a (PPP) GDP of over $4trillion, the EEU, as it is known, is no laughing matter. Ian Bremmer of the Eurasia Group (no relation to the EEU) puts the EEU in perspective: "The size of the EEU is not the primary cause for concern; rather, it's what it reveals about Vladimir Putin and his commitment to maintaining regional dominance. It's why he will go to such extremes to keep Ukraine from joining Western institutions like the EU or NATO. He's not willing to cede this sphere of influence, and Ukraine is the crown jewel; there is no viable, robust Eurasian Union without Ukraine." 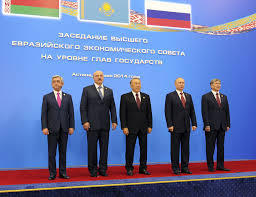 Armenia, which all told would probably prefer to be part of a progressive Western alliance, joined under strong pressure from Russia. This small Caucasian republic is so dependent on Russia for trade and military support that it is often referred to as a Russian colony or satellite which seems to even defer to Russia in legal controversies when they occur on its native soil. After the dissolution of the Soviet Union, the former soviet republics underwent economic reforms and privatization and experienced concomitant economic crises as they converted their economies and manufacturing sectors to market economies. The short-lived CIS was a failed attempt to hold the old empire together. Like the EU in Brussels, the EEU has a central (Moscow-based) office and executive body, the Eurasian Economic Commission, and a political body, the Supreme Eurasian Economic Council. The EEU allows for free movement of workers and a single market for construction, retail, and tourism and is particularly important in the energy sector where Russian companies such as Gazprom are among the most powerful in the world. Over the next 10 years, the EEU plans to create a court in Minsk, a financial regulator in Astana and possibly open offices in Astana, Bishkek, Minsk, and Yerevan. It also aims to extend its single market to 40 other sectors, with pharmaceuticals next in line in 2016. Zach Witlin, also of the Eurasia Group, thinks that the EEU will not move beyond its custom and labor union objectives because, "the only member not dependent on Russian largesse is Kazakhstan. But the Kazakhs, who are already wary of Russia's political designs for the bloc, are being forced to address the economic risks of closer union with Russia. Low oil prices and the ruble's rapid depreciation are pushing them toward less integration, rather than more."

Beyond these immediate plans, expansion includes a larger bid to unite Russia with the Chinese and Asian markets by, among other things, improving existing infrastructure and transport routes. Ian Bremmer explains, "The more Russia alienates the West over the fallout with Ukraine, the more reliant it will become on Asia--China in particular." It's an ambitious gamble, but anyone who knows Vladimir Putin knows that he is nothing if not ambitious.