The world is round, not flat -- so is economics.

2014 for Europe should have been the year of the circular economy, which is the new global paradigm for designing patterns of development of our society and industry from here to 2050. But it was not. Europe had the opportunity to again led the world as it has done in the Green Industrial Revolution providing leadership for China and even the USA, which is still not there yet. The "cold shower" on the expectations of those who had believed in this perspective came at the end of last year, directly from the new European Commission established under the presidency of Jean-Claude Juncker, who decided to cut a long list of programs that he deemed ineffective or too expensive. Among these that he slashed is the program to establish, start and institute the circular economy.

Now at the end of 2015, however, something important has happened. Despite the horrific mass murder of over 129 people in three different areas of Paris on Friday November 13, 2015, France and the world want to move ahead to global solutions for this kind of attack. The UN has planned a conference in Paris that is focused on the solutions to climate change which will take place since it is critical to the future of all human beings and the earth. There are the reactions of the EU nations and the concerns of many Member States who have forced the EU Commission to do a review of its position. And "restate" its earlier non-action to implement a circular economy plan that makes solutions to climate change a reality and certainly provides the world with solutions that offset violence, wars and terrorists attacks. The EU Commission had declared that the withdrawal of the first circular economy package was actually intended to define a "more insightful and strategic scope." Will this really take place? And especially now due to the need for world leaders to be secure and lead people to a new global reality to stop climate change with green smart communities that are no longer dependent upon fossils, their resources and the economic forces behind them.

Certainly, the first proposal of the Commission was rather incomplete and focused primarily on waste management without addressing other significant environment and economic areas. For example, all other key aspects of this new economic paradigm, such as remanufacturing, disownership of things, sharing economy and bio-economy are significant to every nation and its citizens. Now more than ever with millions of people from the middle-east all seeking survival and new lives, solutions are needed for climate change that provide support for them.

With this background, last June (2015), a strategic EU conference was held, where Commissioners Timmermans (First Vice President) and Katainen (Jobs, Growth, Investment and Competitiveness) solemnly promised to put determined efforts forward in support of the circular economy, calling it a "fundamental strategy" for Europe's development today.

Therefore in Brussels, the EU has started to work intensively to create a new and more comprehensive "Circular Economy Package " which should be ready by the 2nd of December 2015. Despite the November massacre in Paris, the clock is ticking and thus everyone will see this time what happens for the future. The expectations are high because investments in the circular economy will support the "green" (e.g. environmentally friendly) development of European industry and, at the same time, help achieve the goals that will emerge from the UN COP 21 on climate change in Paris that will be held in early December 2015. As seen below, the circular economy differentiates from resource efficiency. 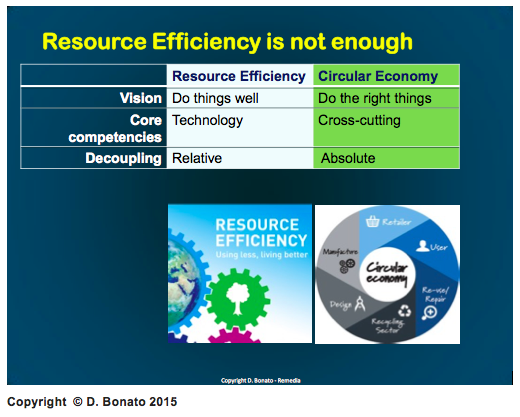 But what exactly can the public and leadership expect? The experts who are working on the new package are well aware that, at present, about 90% of the European industry turnover (sadly one of the best performances in the world) is based on linear economic models of procurement, production, consumption and disposal of matter. This neo-classical economic model is now defunct and proven to be only an ideological model that does not work in today's EU, let alone around the world for other nations. That is one reason why Clark and Fast have been asked to update their book on Qualitative Economics (2008) since the "invisible hand" never existed in the past and needs to be monitored for the future in a scientific manner. Governments have always been involved in nations and their development on all levels. "Civic or social capitalism" is needed now more today than ever before.

Furthermore, it is recognized, at least in principle, that the only alternative to ensure a viable safe future for new generations of European citizens (and refugees) is that of a rapid transition to an industrial system that is based on the circular economy paradigm providing economic, family and cultural support for everyone. Businesses and governments need to rethink production cycles so as to eliminate the concept of waste, through optimized models for the reuse of products, disassembly and recycling of goods. The circular patterns to which the industry should converge will have to specialize and focus on environmentally positive products, goods and services in order to address the different issues related to fast moving consumer goods from those of durable goods.

In the first case, the EU will push on the use of non-toxic natural ingredients, to be securely reintegrated into the biosphere. For durable goods, the goal is to ensure high rates of reuse and recycling, in order to avoid that hazardous substances that can harm the environment and to maximize resource efficiency. It is essential to achieve a strong decoupling of economic growth and raw materials usage from neo-classical economic model that never really existed.

To clarify the importance of decoupling, the public and governments all know now that the extraction of natural resources at European levels has increased from 12 billion tons in 1980 to the current 22 billion tons in 2015. Decoupling is therefore a strong requirement for the European economy, which would allow, among other things, to reduce the volatility in the prices of critical raw materials, giving stability to European industry and reducing supply risks.

In economic terms, the Commission estimates that, thanks to the circular economy, the savings in raw materials for industries by 2025 could be at least equal to 14% at the same level of output. Furthermore, this is a saving that could generate a benefit equals to 400 billion Euro. In addition, the circular pattern would favor the creation of new business sectors, giving stimulus to consumption and promoting job growth.

The European industry has already started to change

Some of the more advanced European industrial companies have anticipated the Commission moves in Brussels. Many nations have begun a transition of their production systems and service to the new "circular economy" structure. This is happening because the most innovative enterprises have realized that the adoption of production models based on circular economy favors the development of their business and create shareholders' value. The most useful strategies range from re-manufacturing of exhausted products to the transformation of products into services, according to the paradigm of the circular economy for sharing, from zero-waste policies to supply chain redesign aimed at implementing new symbiotic partnership. This is already a reality in the European electronics industry, where manufacturers have created dedicated organizations focused on resource efficiency, recycling and eco-design such as Remedia in Italy, Ecosystemes in France, and Repic in UK.

The European Commission has expressed its intention to encourage and accelerate industrial investment for the adoption of circular economy models, rewarding the most worthy programs and ideas. Tracking and watching these intentions will translate into concrete measures, capable of transforming the current experimental stage in a so-called mainstream scenario/

Hence, the industry reference models will actually be based on the circular economy concept as noted below: 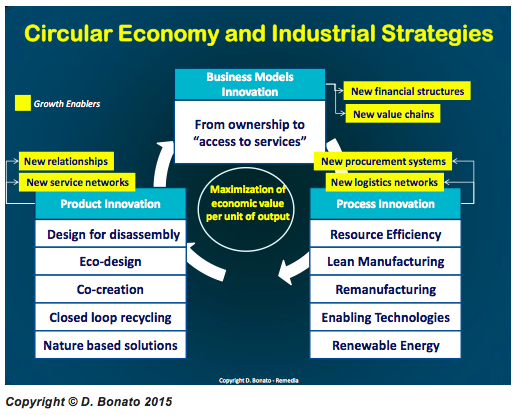 The "circular economy package" for Europe

Europe needs an effective set of measures to support the adoption of circular economy as an essential component for the EU growth strategy. Most of the required ingredients are already in place and there ready to go. However, first of all, the European Commission needs to deal with the cultural and innovation gap at all levels ranging from consumers and their communities to industry and business to public institutions, government, schools and society itself. The first priority for the new package will be the building of a favorable government policy and plan for the development of new eco-innovative and systemic industrial models inspired by the circular economy paradigm. The need is for tackling bottlenecks, such as skills gaps, poor consumers awareness, to lacking of a strategic vision, plans and financing and thus to weaken investment capabilities of small and medium enterprises.

The long awaited circular economy package from the European Commission would therefore provide the necessary tools to address and overcome the current and future limits. Stakeholders expect effective measures to promote and reward companies that invest in the design of products, services and industrial processes based on a systemic, eco-innovative vision, with a strong focus on SMEs.

To accomplish this critical end result, it is important to identify the leaders; study their strategies; and provide effective and balanced rewarding mechanisms ( ranging from economic to environmental and modernization). Such incentives should be expressly aimed at companies that are committed to transform products into services, while maintaining ownership of the goods sold in order to more effectively manage their end use. Financial services is an important civic capitalism strategy to provide a better and tailored answers to consumers' needs. In addition, new measures to stimulate the circular economy should fit into a broader framework related to the rethinking of the current fiscal policies, in support of green economy and eco-innovation that protects our environment, and air for future generations.