I was approached by the Channel 4 funding body, Random Acts, back in January about developing a short film based on "The Event," a poem by Tom Chivers.

I would not consider myself a poetry buff, but the concept of the end of the world told through the eyes of a couple was heartbreaking to me. I have also always been a sucker for the reverse story format -- seeing the future before the past so that everything takes on a new significance. It's like being let in on a secret that the characters don't know, so you feel for them even more.

Often when I begin a new film, my starting off point comes from passages in books. With Belly, it was a line from Jonathan Safran Foer's Extremely Loud and Incredibly Close:

'She went home with her father, the centre of me followed her, and I was left with the shell of me'

With, "The Event," I had the joy of having the writing provided for me, and it was this line that had me running to the drawing board:

'Wearing Halloween masks we made love, and you said something really evil about a mutual friend.'

Taken from the first day after they are plummeted into this apocalyptic world, you immediately understand the dynamic of the couple. You are brought into this jarring world of the familiar mixed with fear and sadness. The imagery of Halloween masks brought up several connotations -- gas masks, faces melting from radiation or faces transfixed with fear, eyes wide like ghosts. To make love with these faces on, whilst fighting, was incredibly compelling to me.

Random Acts - The Event from Julia Pott on Vimeo.

It was very satisfying to immerse myself in this world of horror and the mundane. The poem was so strong on it's own I really had to push myself to bring something new to the table. With lines like, 'we left our cars in short stay,' I really struggled. I couldn't shake the obvious imagery of the every day -- cars in a short stay car park, in an urban atmosphere. When I started to push past that and team these familiar lines with unfamiliar scenarios I began to really understand my role, bringing a new significance to the writing rather than just animating what is already there.

With a poem of this nature it was difficult not to confuse matters. I tried to find a constant iconic image to carry throughout the piece, and I was very drawn to the severed foot. The aspect of my work that I find the most engaging is in creating malleable worlds where bodies can morph and stretch in line with their internal struggles. Focusing on the severed foot as a symbol of love, loss and pain seemed the right fit. I also became a transfixed with using howling ghosts as a representation of fear and mourning.

The shots were eventually fleshed out enough thanks to long email chains between Carrie Thomas and myself. Carrie conceived the collaboration and was a great confidant along the way.

I then began to start thinking aesthetically. I had dipped my toe in the live action pool before and now I wanted to dip it a little bit further. I had discussed collaborations in the past with my good friend Adam Wissing, a brilliant live action director, and this project seemed an ideal fit. I knew I wanted to shoot at the beach as it has this haunting atmosphere I felt right for the film. We chose to shoot in Montauk, I think in part due to delusional images of us running about on the sand in February a la Eternal Sunshine of the Spotless Mind. This went straight out the window as soon as we arrived, as it was cold beyond all reason. Paralyzing cold. Being an animation director I often shy away from the outside world, opting to stay inside bent over a light box. This was a pretty harsh introduction to working in the outside elements, which is exhausting in a whole other way to animation. I have to admit I wasn't much help. After discussing what shots I wanted in each scenario I spent the remainder of the time accidentally getting sand in the tripod and thinking about where we should go for dinner. Adam, thankfully, was bloody brilliant; I couldn't have done it without him.

The next few months saw me trawling through the footage, creating hand drawn animation for the shots, and watching a lot of Buffy the Vampire Slayer.

When Tom Brown came in to help with the motion tracking shots I knew it had all been worth it. When I saw my animated characters interacting with these live actions worlds it made them seem more real than ever, made me feel more for them. The final icing on this pretty depressing cake was Joseph Tate's sound design. No one can make a limb snapping off sound more cringe worthy than him, and for that I am grateful.

Bringing Poetry to Life: 'The Event'
"The Event": Working Stills 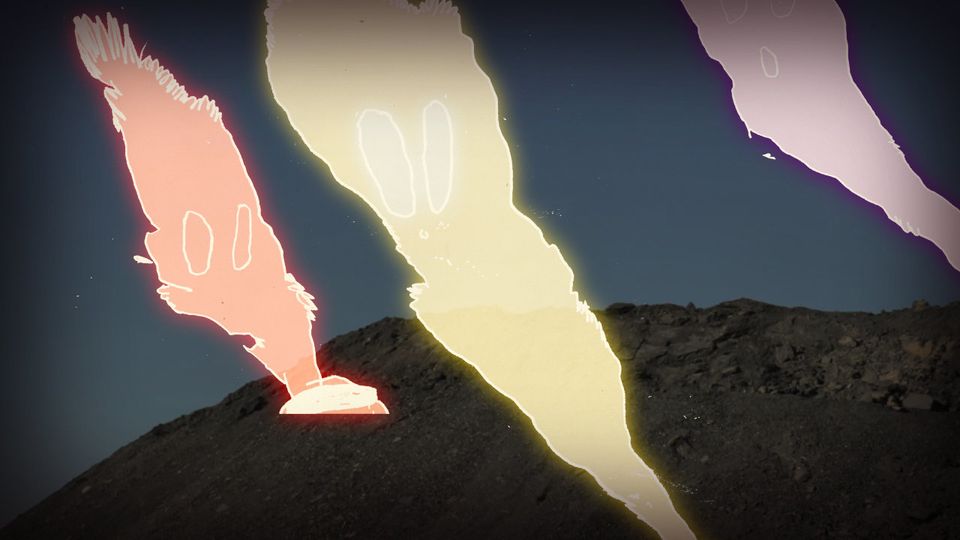