"We'll never achieve a just and sustainably lifegiving future on the resources of the existing religious traditions, and we can't get there without them." --Thomas Berry

The 21st century will be seen as humanity's rite of passage. We're growing up as a species, going through the very same process we've all gone through individually. Our biggest challenge? Idolatry of the written word.

As children, we're guided by beliefs and we think the world was made for us. As adults (at least ideally), we're guided by knowledge and we live our lives contributing to others and the world. Indeed, for healthy adults, self-giving is one of life's greatest satisfactions. As well, most of us need no special training or incentives to begin questioning the beliefs we are spoon-fed as children -- just the usual dose of hormones and peer focus that signal adolescence.

These two transformations, from beliefs to knowledge and from self-focus to contribution, are precisely what we're now collectively experiencing. I call this species-wide rite of passage the "Evidential Reformation" and I believe it is destined to transform not only the science-and-religion debate and how religious traditions relate to one another, but (even more importantly) how humans relate to the larger body of life. 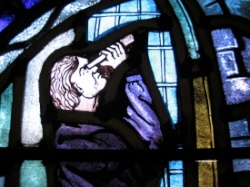 The biggest challenge to our maturing as a species, however, is also what has made it possible for us to get this far: literacy. Modern science, cumulative knowledge, global communications and so much more would have been impossible prior to writing. Unfortunately, "religions of the Book" have made an idol of writing. They have succumbed to, what I call, "idolatry of the written word."

From Beliefs to Knowledge

In our "childhood" as a species -- as tribes, then villages, then chiefdoms and kingdoms, then city-states and early nations -- our main source of guidance came from religious beliefs. Shared allegiance to a particular religion that bridged ethnic and linguistic differences was a crucial factor in the rise of civilizations around the globe. Consider: our instinctual heritage as social mammals will suffice for fostering cooperation at the scale of a clan or small tribe. But as Edward O. Wilson and Jonathan Haidt each discuss in their current NYT bestselling books, "The Social Conquest of Earth" and "The Righteous Mind," to induce thousands of human beings to cooperate we have needed (at least historically) a singular, shared, unquestioned religion. (See also "The Evolutionary Significance of Religion: Multi-Level Selection.")

In any bioregion where fierce competition for territory or resources arose, there would have been a survival advantage to groups that could forge cross-clan alliances for mutual defense. As well, there are two functional concerns that all cultures must address: what's real and what's important. Philosopher of religion Loyal Rue refers to these two functions as "how things are" and "which things matter." (Watch a six-minute YouTube video based on his book, "Religion Is Not About God.") Throughout almost all of human history, how things are and which things matter would have been answered differently, owing to regional differences in landscapes, resources and the interpretive imagination of one's ancestors. Each "wisdom tradition" thus reflects regional collective intelligence encoded mythically.

In our "adolescence" as a species (which was a threshold crossed as the modern era swept the globe), we began to question the beliefs, interpretations and meanings we had inherited. The birth of this new form of collective intelligence, global collective intelligence, occurred when access to powerful new technologies (beginning with the telescope) ramped up our ability to discern how things are. We then faced the frightening truth that ancient understandings were not, in fact, the best maps of what is real. Traditional religious beliefs, interpreted literally, lost their credibility.

Some individuals were thrilled at the prospect of participating in this threshold event. They valued measurable observation and collectively encouraged rationality, skepticism and testing as the preferred means for discerning what's real and what's important. In the 19th century these "natural philosophers" became known as "scientists."

The two institutions responsible for ensuring that the self-interest of individuals and groups are aligned -- namely, governance and religion -- were impacted differently by the rise of modern science. Democratic forms of governance were the first to embrace evidence as authoritative. Religions are only now beginning to catch up and to taste the thrill of what the Evidential Reformation offers. What has been holding them back?

Idolatry of the Written Word

The main obstacle to religious people wholeheartedly embracing evidence as divine communication -- divine guidance (i.e., how Reality reveals itself) -- has been idolatry of the written word. Idolatry of the written word occurred anywhere in the world where ancient oral stories (which surely evolved for millennia as conditions and needs changed) became frozen into unchanging scripture -- scripture that was then deemed as the foundational (even the sole) locus for discerning priorities, values, right thinking and right behavior.

This shift from oral storytelling to unchanging scripture as the way wisdom, morality and a sense of the sacred (supreme value) is generationally passed forward set the stage (albeit centuries later) for a profound and now exponentially growing mismatch. This mismatch is between globally shared and empirically tested updates of (once-again) evolving wisdom versus what religious people still preference as "God's Word."

Idolatry of the written word has thus led to what could be considered "demonic beliefs."

I do not hesitate to use such harsh language because any and all beliefs that cause good people to do bad things and to vote in evil ways -- ways that are shortsighted, self-centered and harmful to future generations -- are demonic.

Who among us does not see where such beliefs have led to a kind of collective insanity? The only cure, as far as I can tell, is for religious leaders to accept -- indeed, to celebrate -- that scientific, historic and cross-cultural evidence are the actual venues through which Reality/God is speaking and guiding humanity today. Fortunately, this shift is happening rapidly and seems likely to be fleshed out in just another generation or two.

I do not decry or disvalue this aspect of religious history. Indeed, I accept that idolatry of the written word could not have been avoided. Without the shift to literacy, humanity would never have been able to access the fruits of modernity: the rule of law, exponentially growing knowledge, cumulative technological and medical advances, and a widening sense of one's "in-group" and compassionate treatment thereof.

Nonetheless, the social consequences of this form of idolatry have been severe -- and threaten to become even more terrifying and destructive as deadly weapons come in ever smaller packages. It is thus time to speak out against continued favoring of ancient scriptural "authority" over our best collective understandings of facts and values today.

Until faith leaders become a whole lot bolder in proclaiming the goodness and necessity of the Evidential Reformation, religious people will remain blind and deaf to what God (Reality personified) is revealing today through scientific, historic and cross-cultural evidence. Paradoxically, God/Reality will continue using the New Atheists to mock unchanging religious beliefs and those who espouse such beliefs.

What the Evidential Reformation offers religion is centrally this: Science reveals "God's word" for humanity today -- that is, what's real and what's important -- far more accurately than the Bible or Quran could ever hope to. Were they alive today, Moses, Jesus, the Apostle Paul and the Prophet Mohammad would surely be among the first to applaud this trend.

As the world's great religious traditions come to honor and celebrate evidence as divine guidance, they will begin to wield their moral authority in ways that assist, rather than resist, the passage of our species out of the desert of destructive and unsustainable adolescence. Ahead we can begin to discern the promised land of contributing and fulfilled maturity.

In the following three-minute YouTube clip, "Humanity's Rite of Passage," I briefly discuss the two main points made at the beginning of this post: