Recently, I sat down with three esteemed gentlemen to discuss the notion of an ideal place to grow old: Dr. James Birren, 94-year old psychologist and pillar in the field of aging; Dr. Dan Lang, octogenarian retired physician and expert in health care administration and quality control; and Michael Bedner, who founded Hirsch Bedner Associates in 1964 -- now the largest hospitality design firm in the world.

Although Mr. Bedner has designed hundreds of luxury hotels around the world, the ideal discussed was not as far-fetched as the current film The Best Exotic Marigold Hotel, where an all-star British cast including Dame Judi Dench, Billy Nighy, Tom Wilkinson, and Maggie Smith retire to India finding their new digs to be less than idyllic.

The consummate academic, Birren suggested we consider retirement living within the history and evolution of senior housing policy, which not coincidently, began in the 1950s and 1960s, during the height of America's Baby Boom. At the same time, hundreds of suburbs popped up outside city centers across the country, with the proliferation of stereotypical single family homes on sprawling cul de sacs. When newly-minted "traditional" families moved to their three-bedroom homes built for families with small children, they often parted with previous convention, leaving grandma behind to age alone in her own home. Incidentally, in the last 50 years, retirement living came into its own, with the birth of sanctioned age-segregated communities, as well assisted living and nursing home facilities.

In the last five years, both Birren and Lang sold their homes and relocated, along with their wives, to a Continuing Care Retirement Community (CCRC) in the exurbs of Los Angeles. For couples, what's perfect about such a setting is that each spouse has access to the services and care he/she needs as an individual, while his/her partner lives in close proximity.

Birren and Lang praised the benefits of their retirement community, where they enjoy the collegiality of dining with other residents, enrichment classes, health and wellness, a sense of security, freedom from home maintenance chores, and most importantly, access to ongoing care as their needs change. However, a valid question posed by the fictional Marigold Hotel is whether moving into a retirement community is idealized or ideal. CCRCs, where residents buy into care for life, are expensive and available only to those who can pay the initial amount and monthly fee.

I asked both Birren and Lang whether it was difficult to leave their stuff when they moved. How does one pack a lifetime of memories into a few boxes to take along to a retirement home? Many of us don't. It's not just our possessions and the cost of relocation that drives most Americans to age in place in our lifelong homes -- it is the house itself, a person's attachment to that place, and the meaning what occurred there.

As a psychologist, Birren discussed the importance of the house as a symbol. For a visual image, think of Clint Eastwood as the tough Walt Kowalski in Gran Torino, Ed Asner giving voice to Carl Fredricksen in the popular film Up, or Hal Holbrook as Abner Meecham in the less known That Evening Sun. These men were literally dying to stay living in their homes.

Most real life older people express a preference to stay living in their homes as long as possible. But, there are questions: Is aging in place idealized or ideal? Are all older people safe living in their own homes until they die? At what point is it time to move, if ever?

Many older citizens living alone at home are isolated, depressed, and lonely. Many want help but don't have the connections. Others sabotage any efforts to engage them in community and family. Do older adults have a right to refuse help, or should the government step in when family, friends, and neighbors are not there? Upon realizing that there are many vulnerable older people in nursing homes who are also lonely, helpless, and bored, maverick Dr. Bill Thomas committed his life to changing the way Americans think about aging and institutionalization. Check out the Eden Alternative.

Furthermore, the Aging in Community and Village Models, consider both aging in place and nursing homes to be outdated models. Building on Scandinavian design and traditional service-oriented villages, neighbors choose to live together in clustered housing, sharing caregivers and service providers when needed, pooling resources, and combating isolation. These developments are important steps in the evolution of senior housing, retirement living, and long term care.

What is your ideal place to grow old, and will you be part of its evolution? 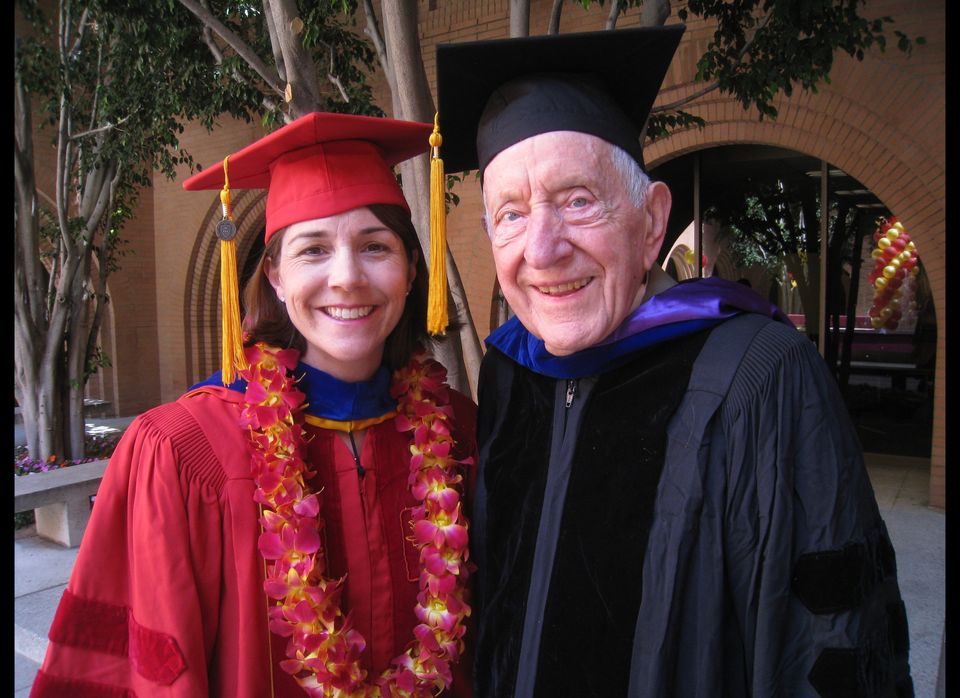 1 / 6
Caroline Cicero And Gerontologist Jim Birren
Here I am with Dr. Birren, the Grandfather of Gerontology, when I received my PhD at USC. It's like getting a degree in Psychoanalysis and having your photo with Sigmund Freud. He's 92 in this photo and was the commencement speaker.