Even though I insisted on eco-friendly, child-labor-free toys for my daughters, I was excited to pass down my Barbie doll collection to them 23 years ago. As I eased Barbie's skinny, little molded plastic appendages through sleeves, pant legs and neck holes, I was awash with that old familiar feeling. It was disconcerting, though, when we tried to dress a brand spanking new Barbie in a vintage red and silver glittery, strapless evening gown and it slipped right off. I later learned that in 1989 Barbie's proportions were altered including a breast reduction. Barbie has been evolving all along, but until now it's been incremental (#TheDollEvolves). Ken too has been altered over the years to have a bigger head and broader shoulders. The fact that Ken is on steroids seems to have flown under the radar. With these body changes, much of the Barbie and Ken wardrobes I saved from my childhood have been rendered useless. 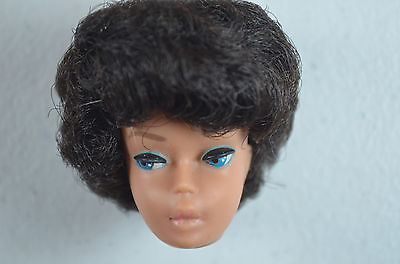 It was impossible for me not to have an affinity for Barbie. After all, we shared the same name. Only my Nana could get away with calling me Barbie doll and later, when I was in high school, driving a Chevy Malibu earned me the moniker "Malibu Barbie" (even though my lifestyle was the antithesis of that 70s Barbie model). I was a hardcore Barbies player. I had one best friend who preferred playing with G. I. Joe. Her idea of playing Barbies was to have her go on life raft romps with Joe in the bathtub. But Barbie's anatomically unrealistic shape, made it impossible for her to keep from toppling off of Joe's regulation Army raft, resulting in a permanent bad hair day. My other best friend was much more amenable to more traditional Barbie scenarios. Our set-ups became so elaborate with furnishings and other paraphernalia, that after a few years, we shifted the game to her attic. That way we didn't have to disassemble it every day. I pushed playing Barbies to the limit ─ beyond the point when anyone else was interested. As a child, I didn't give any thought to Barbie's impeccable make-up or her high heel ready feet and the term "body image" wasn't in my vocabulary. To me, Barbie didn't look any different than the other 1960s women I saw on TV and in magazine print ads. All I knew was that as a budding writer, Barbie was my vehicle for limitless story possibilities. In support of the new more diverse dolls, Mattel has said, "Girls everywhere now have infinitely more ways to play out their stories and spark their imaginations through Barbie." Thankfully, this realm of childhood remains universal and timeless.

Since the focal point of the relationship with my friend was our Barbie game, when she lost interest, the friendship ended and that was also the end of my Barbie playing days. Junior high happened. High school happened. We remained neighbors only living a few doors away, but we never reconnected, not even for a moment. Eventually, we went off to college. In my sophomore year, my parents made the decision to sell our house, triggering childhood memories, particularly of my Barbie playing days. That's when it suddenly occurred to me that with our friendship ending so abruptly, I had left my Barbies at her house. The thought of contacting her after all those years was akin to cold calling, but I was determined to get my Barbies back.

One afternoon during Spring break, I found myself walking that familiar beat I had walked a thousand times before and like an out of body experience, I entered her house, marched up the stairs, past her bedroom, into her brother's room, and up to her attic. And there it was...our Barbie world, just as we had left it eight years earlier. Barbie was seated on the couch. My "flocked" hair Ken doll had his arm around her. Ken had lost an arm. (Vietnam is how I explained it.) For a romantic interlude, I would wrap his shirtsleeve around Barbie's waist and tuck it into her outfit to hold it in place. Barbie was in her riding outfit─corduroy and fake suede pants and top, complete with boots and riding crop. From the time I was old enough to shop by myself at Kiddie City, I would purchase one outfit a week. I delighted in Barbie as Fashionista with her clothes changing from June Cleaver matronly dresses and slinky evening gowns to groovy pants ensembles.

For the next few hours, we sat on the floor. Little conversation was exchanged between us. We methodically sorted out the dolls. We each had a bubble cut Barbie (vintage, 1962). Mine blonde, hers brunette. I also had a bendable Barbie and a Talking Barbie. While I had Ken, she had Barbie's best friend, Midge, and her boyfriend, Allan. I had two Skippers, a redhead and a later brunette version. We had also thrown a few Liddle Kiddles into the mix as younger sisters or sometimes as Barbie's children. We moved on to the outfits next─hers, mine. Any crocheted or knitted outfits went to me automatically because my Great-Aunts Sophie and Roz had their own original 1959 Barbies on stands, which they used as models to make clothes for my dolls. After we were finished with the wardrobe, we sorted through the furnishings, then the cases. She had some elaborate furniture, handed down from a cousin including a sleeper sofa. That certainly spiced up our games.

Once the task was complete, we made our way downstairs to her front door, avoiding eye contact along the way. With my Barbie cases in hand, I walked down her path for the last time, through the white picket fence gate, and out of my childhood.