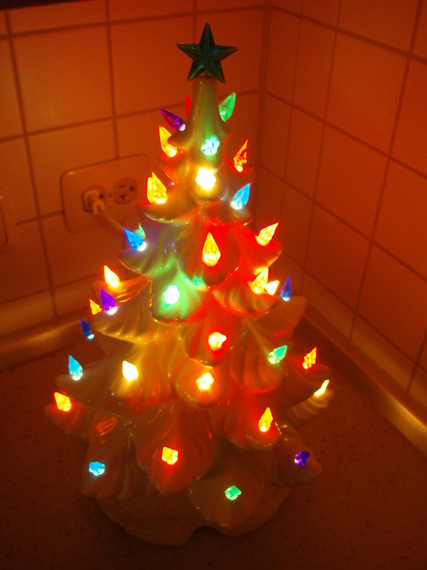 Sometime after the Earth cooled - let's just say it was between a gazillion and a gagillion years ago - slimy little amoebas sprouted fins and then legs. And soon, critters of all shapes and sizes roamed the planet.

Not too long after that (again, I'm a little foggy on the dates but feel free to Google it if you're a stickler for facts), hairy Homo sapiens started squirreling away special rocks and animal pelts to give to each other as gifts.

I'm no archaeologist, but I'm pretty sure gift giving back in those days wasn't a holiday ritual. Darwin would probably tell you that exchanging gifts was a way humans ensured reproductive success and perpetuation of the species.

But let's not get into all that tedious history. Suffice it to say that, eventually, human beings and gift giving evolved into the wallet-busting tradition known today as "The Holidays."

While it is true that my husband, Francis, is unusually hairy and has been known to grunt, our gift giving ritual has progressed significantly from that of our cave-dwelling ancestors. However, I must admit that our family's holiday evolution has been marked with periods of barbarism, savagery and other primitive behaviors.

When Francis and I first married, we celebrated the holidays snuggled on our couch, whispering sweet nothings and exchanging meaningful gifts we charged on credit cards with $1,000 limits, blissfully ignorant of the 23% interest rates.

Soon, I gave birth to our three children. Unable to contain our "Baby's First Christmas" excitement, we bought toys, clothes and tiny little rocking chairs, carefully wrapping them and placing them under the tree.

The rookie mistake we failed to realize was that babies just slobber on ribbons, pull ornaments off the tree, and take naps on Christmas. We could have saved ourselves a lot of time and money had we just bought them each a 97-cent bag of bows from Wal-Mart.

Then, the kids got older. Their developing brains were now able to contemplate things like St. Nicholas, the Christmas Miracle, and that the Star Wars Jedi Master Lightsaber requires three AAA batteries. Our kids' new level of consciousness meant that we had to hit the streets, elbowing fellow humans in a primitive race for the last Barbie Saddle 'N Ride Horse at Toys R Us.

If we survived the shopping, we nearly died of exhaustion on December 24th. After cookie baking, photos with Santa at the mall, an elaborate prime rib dinner during which the kids whined for boxed macaroni and cheese, church in the itchy outfits Grams sent, and a reading of our "T'was the Night Before Christmas" pop up book, we were forced to stay up until the wee hours wrapping gifts.

By 6:00 am when the kids woke us up, it was all we could do to grab a cup of coffee and witness the mayhem. Wrapping paper flying, we spent our last bit of energy removing hundreds of wires, zip ties and Fort Knox plastic packaging from the kids' new toys.

Now, they're teenagers. At this point in our family's evolution, the kids know more than we do, and they take full advantage. To them, the Magic of Christmas is that they can manipulate us into buying them an Xbox One even though they got a C in Chemistry.

Furthermore, even though they used to hate it when we gave them clothing for Christmas, it is somehow now crucial that they get lots of new clothes. It seems that their entire social life depends on them receiving a new blanket poncho, midi boots, or hipster beanie. Problem is, we never seem to get what they want. We just keep the receipts and brace ourselves for lots of eye rolling.

Through it all, we've learned that the holiday is not just a Darwinian gift exchange ritual designed to perpetuate our species. It is a time of selfless generosity, when human beings gather to joyously celebrate with family and friends.

And as we remind ourselves of the ancient miracles that gave rise to our holiday traditions, we will heed the most important lesson of gift giving that can be summed up in two simple words: Gift cards.