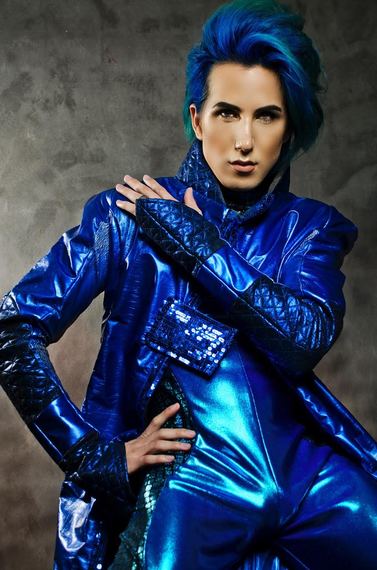 It's rare in life, and even rarer in the music industry, for someone to pull off a transformation. Whether that transformation is physical, emotional, or otherwise, fear tends to keep people from breaking free of their identities. For some artists, the transformation would be accompanied by screeds lauding their bravery, or tales of woe about how their creativity has been suppressed. However, like many people on the queer spectrum, Ricky Rebel doesn't see his path to his current self and success that way. He's just being himself, and by doing so without fear he serves an an amazing example to anyone struggling to accept who they are. In that way, Ricky Rebel is absolutely fearless. Beginning his career as a young man in the highly manufactured, rigidly modeled world of the Boy Band as the lead singer of No Authority, Ricky has since gone on to break just about every mold a singer in that position could be placed in. What makes it even better is that Ricky's career is thriving, with shows coming up on February 11th at Club Sinister in Hollywood, CA as well as a gig at the South by Southwest musical festival in Austin on March 18th.

We had a chance to talk about his career path, what it was really like inside the 90's mass-market pop machine, the nuances of being bisexual, and making it as a queer artist in the music industry.

How did your career in music get its start?

As a teenager I joined the pop group No Authority as a lead singer. We worked together for several years honing our skills, and eventually we caught the attention of a Sony A&R representative. He sent our demos to Michael Jackson and the President of Michael's label on Sony, MJJ Records (Jerry Greenberg), and they signed the group to the label and officially kicked off my career. I owe a lot to Michael Jackson and MJJ Records for taking a chance on me.

What part of the 90's pop scene you were a part of with No Authority do you think would be the most surprising to learn about to an outsider?

I think it would be surprising to learn that the music industry back then was riddled with homophobia. Producers used to say that my voice needed more "pussy juice" to deepen. They'd also instruct us on how to appear more "masculine" in interviews. At one point I got chastised by the label for wearing an outfit that got a couple guys (out of thousands of people) in the audience calling me a homophobic slur. They called us up and said Ricky needs to stop acting so flamboyant. Back then I was not even into being with guys. I had girlfriends. It was a difficult time for me. I literally felt like I was living in a "straight" jacket. It was an unspoken agreement: Act straighter or you might get the band dropped from the label. Another producer told me that I'm never going to make it if I'm openly gay. He locked me into a sound booth and had some guy read Bible verses to me and tell me that Jesus doesn't love me because I was gay. I think Rebel was born out of that repression. I literally fired that producer and said screw it, I'm going to be myself and prove him wrong.

Who are your biggest musical influences, and how do they impact the records you're creating as Ricky Rebel?

I have a holy trinity of artists that I am influenced by. The trinity consists of David Bowie, Madonna, and Prince. I think there's a dash of each of them in the work that I do. I've studied their music and especially their stage performances intensely.

Bisexuality tends to be one of the more misunderstood letters of the LGBTQIA spectrum - what has your experience been as a bisexual person, in terms of how you came out and how it was received?

One of the most honest songs that I've ever written was a track from my album, "The Blue Album," called "Boys & Sometimes Girls." It recently hit #28 on the Billboard Dance Club Songs Chart. I think the reason for its success is its sheer honesty. It took me 1 hour to write and I sang it one take. Coming out was a hard experience for me because I always, to this day, have had an attraction to women emotionally and sexually. I did not have a desire to kiss a guy until I was 18. I'm a late gay bloomer. I think a lot more people are bisexual than they'd like to admit. Socially speaking, it's a little more difficult to be accepted as bi. You're not 100% gay or straight. I never felt like I belonged fully to any sexual "team." 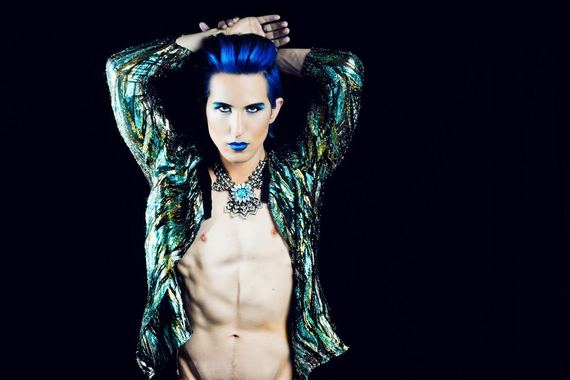 Do you think that being part of the queer community makes it more difficult to get your music out there?

I think that there are still traces of homophobia within the industry. A lot of straight dj's won't play my record because they think that their straight audiences won't accept it. I'm just being honest with who I am. I am not going to pretend to be something that I am not. Eventually they'll play my tracks, the bigger I get. I have no doubt that I have extreme marketability within the straight community. Every time I perform in a straight club the reaction I get is incredible. Men love me because they can feel my confidence and I'm not a threat to their women and women love me because I have a pretty face thanks to our fabulous makeup sponsorship with MustaeV USA, a cute butt and I know how to shake it.

The music industry has undergone incredible changes since your time in No Authority, from the tools available for production to the way that the listener accesses the music in the first place. Do you think the evolution of the industry has made it more or less difficult to be an artist who doesn't fit squarely into any mold to get themselves heard?

I think that the evolution of the music industry is exactly what needed to happen. The big corporate labels were telling us what to listen to and what was considered a "hit." Nowadays, we get to decide what music we think is great. Being an independent artist offers more freedom for the artist to make the kind of music that we actually want to make, not what the label tells us to make. I'm not anti-label; I'm anti-censorship.

What do you think 90's, No Authority singer Ricky would be most surprised by about Ricky Rebel?

Little Ricky would say, "Damn, you are beautiful and sexy." I know that sounds incredibly narcissistic, but it isn't. I grew up with low self-esteem about what I looked like. I felt like I was a cute boy, but never sexy or beautiful. Today I eat right, I take care of my skin, I take Pilates classes and hit the gym. I can look in the mirror and say damn I'm hot. I used to say I was hot when I was a kid, but I did not believe it. I believe that everyone has the potentiality to be their own version of sexy and beautiful, but you have to put in the inside and outside work to get there. 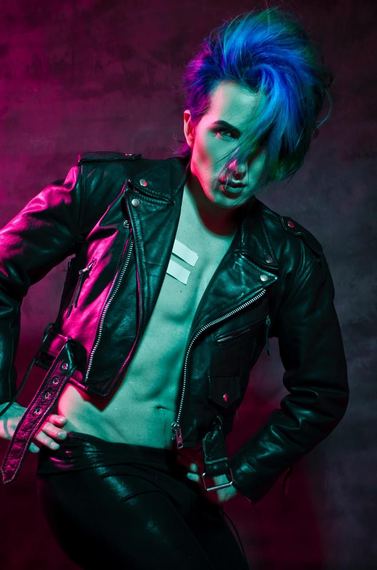 People all over the country are in various stages of fear and shock right now due to our political climate, with many feeling as if we are regressing as a country in terms of our acceptance of people who are different than ourselves. What role do you see Ricky Rebel playing in that equation?

Ricky Rebel can be a bridge between conservatives and liberals. I think both sides have some valid points about how this country can improve. There is tremendous potential for the US to bring about positive change but only when we work together. The division, fighting, and crime has to stop. Anarchy is not the answer. Rebel is not a politician. I'm a recording artist who uses music to bring people together and have some fun regardless of who you voted for. I'm here to entertain you and have a good time. In my opinion life is short and the world needs more fun.

What is your most prized accomplishment as a musician so far?

Charting on the Billboard charts was a huge accomplishment in my eyes because it validated my sound. It took me a long time to have the courage to come out as Ricky Rebel and release my music because in the pop group I was produced by some of the greatest producers of all time like Rodney Jerkins and Jay Baumgardner. Up until now, I produced all of my own original material. I don't have the luxury of relying on slick producers to make my music for me. I always knew in the back of my mind, though, that my music had great remix potential. What I like about remixes are that the original songs are still intact, just reimagined. I'm grateful that DJ Hector Fonseca came into my life and took some of my tracks and turned them into amazing club bangers. Hector spins the remixes in his club sets all over the world and recently played the "Boys & Sometimes Girls (Vito Fun X Koil Remix)" in the Marco Marco fashion show this year. Hector's a huge LGBT music supporter. We need more people like him. The gays need to stick together and support each other, buy each other's music, and come to each other's shows. The male pop Divos need to come out and play. I have a Rebel Mafia of artists that I work with, and all we do is promote each other and perform together. More than half of us are gay. I'm slowly but surely building my label and empire of artists. My goal is to be the gay version of Puffy.

What advice would you give to a young artist just starting out in the music industry?

Stick with your very first vision of who you are and what you want to say with your music. Do not compromise your initial vision. If you do, you'll only be wasting time. The quicker you be yourself will be the quicker you'll succeed. It's that simple.