Human trafficking, modern slavery, commercial exploitation. Whatever you call it, Evolving Perceptions is a series of interviews with individuals working to address the issue. Students, survivors, educators, parents and professionals all give readers a new and better understanding of this crime while teaching us how to respond more effectively to it.

Callen Buchanan is a 17-year-old student from William Byrd High School in Vinton, Virginia. Her passion for art and social justice led her to create a fundraising event called, Art For Abolitionists. This spring is her second such event which she hopes will be bigger and better than the last. 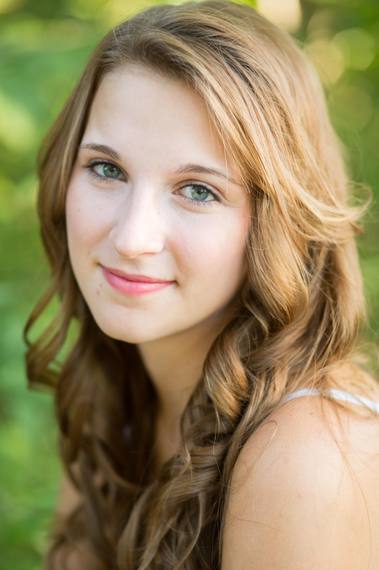 Robert: Who are your role models?

Callen: I wouldn't say I have role models as much as I have a lot of people that I respect who challenge me. The person that jumps out the most is my AP statistics teacher, Mr. Donahue. He always pushes me to go above and beyond. Just hearing "AP statistics" makes you want to run away crying, but he is also in charge of school blood drives. When doing the drives, there have been a few times where we knew it would be a bust if we didn't get more people to sign up by the next day. He convinced me to talk to people, a lot of people, until we got what we needed. For every 10 rejections we got a couple who agreed to give blood. It's hard to hear "no" over and over again and keep going, but, in the end, we were successful! He's given me a lot of confidence in myself without even knowing it. He accepts the fact that I'm not the top student (I'm an art kid... not a math kid!), but he always tells me, as long as I put the work in, I can make it happen because I'm a "doer" in his words.

Robert: What is Art for Abolitionists all about.

Callen: Art for Abolitionists is an art show that utilizes the awesome talent we have here in Roanoke, VA and surrounding areas. We will raise awareness about human trafficking and also raise some money to support prevention education. I go to a school for art part time and, while I don't want to go to college for art, I really do love it. I don't know a lot about raising money, but I do know about art and, as I began to learn more about human trafficking, I decided to throw them together and see what happened. Luckily for me, it worked! Last year we raised $951 in ONE day! This year we will be selling art for a total of 5 days, so, if you live nearby, stop into the Tanglewood Mall in Roanoke on May 21-22 or 27-29!

Robert: When did you start feeling compelled to do something about human trafficking?

Callen: Well, I've always been the kid that wanted to start a lemonade stand even though I live on a dead end road next to a bunch of cows. Hearing about things like the environment, animal abuse, and other issues that are running rampant I get upset. I want to do something about human trafficking, but it seems out of reach. I'd come up with ideas and a lot of the adults in my life would nod their head and say "that's nice sweetie". When the anti-trafficking curriculum for secondary schools, Globalize 13, came to my school I learned a lot. And it bugged me because this wasn't just a thing where I could recycle bottles and feel better. I can't avoid using slave labor because it's a part of the products I use! I tried though, and I miss peanut M&Ms to this day. But it wasn't enough. I was stuck in a place of being bothered about it. I started learning more and filling up my brain with tons of info and one day I just decided someone has to do something. And here we are!

Robert: Do you have some advice for young people who want to get involved with anti-trafficking work but don't know where to start?

Callen: Yes! Just start out simple. Instead of buying a Hershey's bar that may contain forced or child labor-produced chocolate, go to Kroger and find a rainforest alliance certified chocolate. Buy a bracelet that supports women in Indonesia. Start by making little changes in your purchases. Coffee and chocolate are the easiest to begin with. Also, social media. A lot of people don't know that there are still enslaved people in the world let alone in the United States. So share a post on Facebook every now and then.

Robert: What's next for you after you graduate from high school?

Callen: I will be attending Virginia Commonwealth University for pre-occupational therapy, and I just recently got a job where I will be working in general rehab with patients who have severe brain injuries. There are a lot of organizations in Richmond that combat human trafficking, and I would like to get involved with some of those then work my way up in the community.

Robert: Callen, I'm inspired by your spirit and I'm sure the Huff Post readers will be as well.