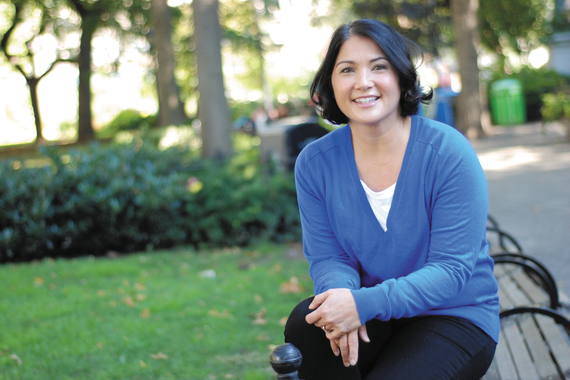 Alafair Burke is the New York Times bestselling author of 13 novels. She is also the co-author of the Under Suspicion series with Mary Higgins Clark. A former prosecutor, she is now a professor of law at the Maurice A. Deane School of Law at Hofstra University.

The Ex is the story of Olivia Randall, a top-flight criminal defense attorney who receives a telephone call from the 16-year-old daughter of a man who 20 years earlier, had been her fiancé and whose heart she broke in the worst way imaginable.

Her former fiancé, Jack Harris, has been arrested and will be charged with three counts of first degree murder. Olivia feels obligated to represent him because of her guilt about their relationship and a secret she's kept for 20 years. She's convinced of his innocence, and is certain someone has gone to great lengths to frame him. But as evidence against Jack mounts, Olivia finds herself doubting, and begins to wonder if she ever truly knew him.

The Ex finds Olivia Randall facing certain ethical dilemmas regarding her role as an attorney. Tell us about the biggest ones she encounters.
She knows the prosecution is hiding something from her in discovery. It's one of the games prosecutors sometimes play: if they're required to turn evidence over, they don't have to make it easy for the defense attorney to find it. They hand over everything and flood them with so much paper so the one thing they're obligated to give them is hidden in the avalanche. Olivia suspects the prosecutor is doing that with her, so she uses her friendship with him to extract a hint, then leaks some information to the press. She walks a fine line about obeying court orders. It's a bit unclear if her actions are unethical, but she feels her duty is to her client.

What about the ethics involved in representing a former lover?
Because it was twenty years earlier and she's not currently involved with him, it wouldn't be a violation of ethics; but it's clearly a dilemma for her. She has personal reasons for representing him because of what she did to him twenty years earlier. She feels she really destroyed his life. Her law partner thinks this scenario is fraught with peril and feels she's not seeing things objectively. As a legal matter, there's no bar to it, but it's not a smart thing to represent someone with whom you've been so personally involved.

Olivia Randall seems the quintessential professional woman. How would you describe her as a character?
I identify a lot with Olivia. She sums up the darkest parts of me and some of my friends. Something that may not be likable about her to some people is her tendency to feel sorry for herself because of her professional setbacks. She had some grand ideas about what her legal career was supposed to look like. She wanted to be a Supreme Court law clerk and wanted to have the corner office in a huge law firm, but none of that happened for her. There's the sense that some of the walls she hit were self-erected. But in the beginning of the book, she doesn't take much blame for where she is in either her personal or professional life. She blames external events for her difficulties. Part of her journey in the book is coming to terms with some of the choices she made along the way.

The Ex deals with many things: the death of a spouse, grief, depression, single parenting, and other family matters. Did you do a great deal of research about these issues or do you know about them from living life?
When you're a storyteller, life is research. I never take anyone's personal story and use it for a novel, but I do think if you walk through the world and talk to people and listen to them, you learn to identify with their lives. It's impossible to write if you're not learning from the lives of others. You must have empathy for people or your characters will be unidimensional.

The role of the Internet is important in The Ex. How has modern technology changed the way you write thrillers and mysteries?
It's a tricky balance for every crime writer. You can ignore the Internet by setting your books in the pre-Internet era. If you don't do that, it can be a bit difficult. It's nearly impossible for a contemporary character to be out of touch. Sometimes you have to do things that feel a little artificial, like having dead batteries, or having the character in a place where there's not a good signal. But there are benefits to technology for a crime writer. We all know some people use technology to do sneaky and evil things. I keep that in mind when it comes to plotting a novel. One of the challenges in writing crime fiction is showing how everyday people could be framed for something as awful as a triple homicide. Of course, these days, with Facebook and Twitter, people share private information all the time, and someone can learn an awful lot about you by going online.

Do you rely on actual cases for the drama in your novels?
At times, I have. In The Ex, I relied on the dynamics of mass shootings, although the story wasn't based on any one particular case. One fear a writer can have is being accused of using someone's tragedy for fiction. When relying on an actual case, I make the characters unidentifiable. I may use the core issue of a real case as a springboard for a story.

Gillian Flynn said your female characters 'are always very involving with big, strong voices.' How do you find a voice for each of them?
It's really a matter of watching the world with empathy. I want each of my main characters to be different. Before I start writing, I must have a sense of who the character is as a person, so I know how he/she will respond. That's where the tension derives in a novel. And, I work very hard on dialogue. If I can't read the page out loud without saying 'Olivia said,' I know the dialogue is too generic.

Will we see more of Olivia Randall in future books?
I never know because I don't plot things out. But, she exists in the same New York as my other protagonist, Ellie Hatcher, a detective. It could be interesting if they met up in another book.

You teach law and write novels. You're quite prolific. Do you ever procrastinate?
If procrastination were a competitive sport, I would get lots of medals. (Laughter). I try to keep enough structure in my life so I don't miss deadlines. I feel as I get older, I've become less and less efficient but I still manage to get all my work done. As a lawyer, you learn to account for your time, so my idea of goofing off is going on Facebook to look at friends' pictures for eighteen or twenty four minutes since lawyers' time is billed in six minute increments. (Laughter). It helps that I still have a job as an attorney. I have a schedule and am forced to be mindful of time. Sometimes, I just have to compel myself write the next book. I might write five-hundred really bad words, but I still wrote the five-hundred words. Besides, there's always
revision.

How did your collaboration with Marry Miggins Clark come about?
Mary wrote a book called I've Got You Under My Skin, which involved a TV show that revisits cold cases. She realized there was potential for a series but still wanted to write her annual standalones. She decided to work with a coauthor to develop the series. My understanding is that she considered a number of people who were already writing crime fiction, and I was lucky enough to get a phone call. We've been having a ball working together. She's whip smart, so I hope I'm learning a few things from her along the way.

How do the mechanics of that collaboration work?
I'd never collaborated on fiction before working with Mary. Neither she nor I outline a novel. We meet frequently and talk things through. We focus primarily on character, then move to plot. Afterwards, we work on a synopsis--explaining who the characters are, their secrets and motivations. Then we pass a draft back and forth. Our voices blend quite well. When you read it, you can't really tell it was written by two people.

You're hosting a dinner party and can invite any five guests, living or dead, fictional or real people, from any walk of life. Who would they be?
I would invite Lucille Ball, Howard Stern, Andy Warhol, Bill Clinton, and Mae West.

That's quite a group. What would you all be talking about?
I think with that group, we could talk about anything and everything.

What's coming next from Alafair Burke?
I'm working on the sixth Ellie Hatcher book, which will take her back to her home town in Kansas, which is where I grew up. I'm continuing to work on the Under Suspicion series with Mary Higgins Clark.

Congratulations on penning The Ex. It's a gripping novel that's much more than a legal thriller. It plumbs love, loss, regret, lost opportunity, and the fascinating issue of characters dealing with chaos in their lives.