Human rights defenders aren't always easy company. It's their job to be stubborn and sure of themselves, so they're often intense, sometimes abrasive.

Yara Sallam is an exception. She's funny, engaging, and easygoing. And she's in jail in Cairo. She's been there since June 21, arrested on baseless charges with 22 other people after being in the vicinity of a peaceful protest march in Heliopolis. Yara is an internationally recognized activist, best known for her work in Egypt and The Gambia. In 2013 she was awarded the North Africa Shield, a human rights defender prize, for her work in Egypt with another leading NGO, Nazra for Feminist Studies. 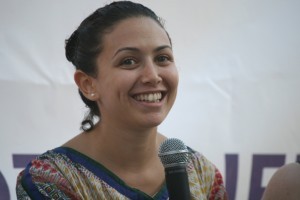 Yara has been an activist since she was 15 years old. Now 28, she has law degrees from Cairo University, the Pantheon-Sorbonne in Paris, and Notre Dame University in the United States. We've been friends for a few years, and I last saw her in January over a coffee in Cairo. She told me she was excited about her new job at the leading human rights organization, the Egyptian Initiative for Personal Rights, and excited about her new bike. She planned to use it to cycle to work, despite the predictable sexual harassment.

It appears Yara was arrested while buying water from a kiosk near a peaceful demonstration against the infamous new protest law (Law 107 of 2013). The law was approved in November 2013. The United Nations High Commissioner for Human Rights, Navi Pillay, UN Special Rapporteur on the rights to freedom of peaceful assembly and association, Maina Kiai, and other leading international human rights experts have condemned the law.

She's now in Qanater prison, waiting to hear what will happen to her and her fellow activists. She and her co-defendants are facing charges of participating in a demonstration without authorization, which allegedly endangered public security. They are also charged with damaging property, displaying force with the aim of terrorizing passersby and endangering their lives, and taking part in a gathering of more than five people with the aim of threatening "public peace" and committing crimes. The authorities have presented no evidence that they found weapons on any of the defendants or shown why they believe they were intent on violence.

The case has generated international attention, and last month a team from the official Egyptian National Council for Human Rights (NCHR) went to Qanater prison. The detained activists delegated Yara and another detainee, Salwa Mehrez, to inform the NCHR representatives that if they want to know the reality of the situation in prison, they should be meeting detainees who are in much worse condition and experience more abuse.

Her next court date is set for September 13, but the trial is unlikely to be fair. Recent hearings of human rights activists, journalists, and other dissidents give little hope that they will be afforded their basic rights.

In September 2012 Human Rights First asked Yara about the dangers involved in her work. "I cannot claim that I am facing risks because the situation in other countries is worse," she said. "But I do not perceive life in Egypt for a woman who chose a non-traditional path as easy. Women in their daily lives, including me, face sexual harassment in the streets and have to constantly fight for their presence in the public sphere, as well as fighting the traditional norms and values about the gender roles in our society. Other than that, working for human rights organizations is not as legal as everyone thinks it is in Egypt, everyone in this field is working knowing that he or she can be arrested for any random reason."