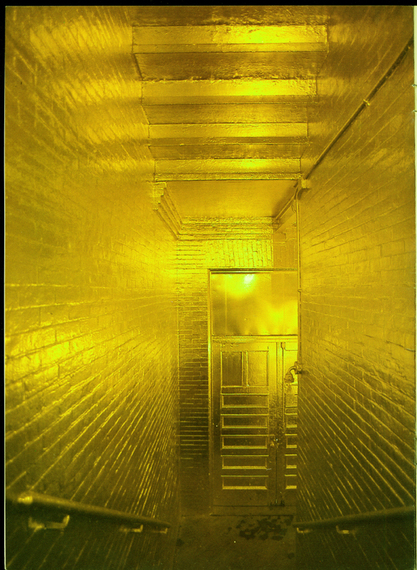 All societies have their ills. This has been true throughout human history, and from the endemic to the incidental, they remain too numerous to list here. Equally true, throughout art history there have been examples -- again, too many to name -- of individuals and collectives, movements born of intention and coincidence, that have taken these ills to heart and produced works of art addressing them. Using aesthetics, semantics, and direct actions, some have even produced manifestos to make certain their goals are explained clearly, in their own words and during their lifetimes, rather than left to the tidying effects of scholarship and the gamble of latter day retrospection. 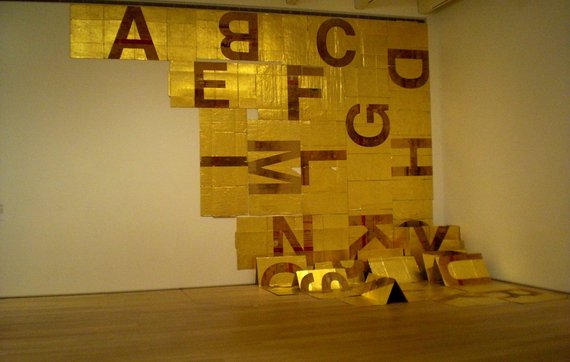 Futurism and Suprematism, the Bauhaus -- they had mission statements. De Stijl, Minimalism, Pop, Arte Povera, Cubism, Abstract Expressionism, Surrealism, Low-Brow -- they had champions. When LA Art Core's October 2015 exhibition Kaloust Guedel and the Excessivist Initiative opens, we will see a contemporary iteration of this impulse of engagement featuring both semiotic structures. Born from certain personal and societal realizations on the part of independent artist Kaloust Guedel, Excessivism is proffered as both a deliberation and a conglomeration, based equally on the raison d'etre of his own studio and on what he sees in the world when he leaves it. 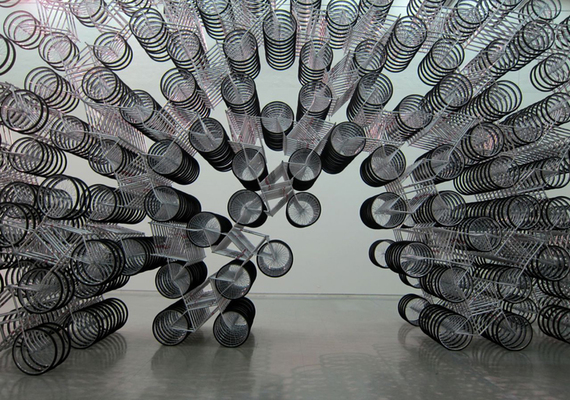 Excessivism is a movement which in itself is contemporaneously developing and annexing. It has a founder, several early adopters, and a manifesto. This last reads in part, "The Excessivist Initiative reflects the capitalist system where excess is constantly encouraged for the sole purpose to deliver profit, without consideration of all other aspects, including human and environmental. Squandering of natural resources has been magnified in contemporary circumstances, when across the globe millions go on living malnourished and at the edge of survival while a few carry on as usual, in luxury..." Not for nothing, but this dynamic is playing out in real time within the circumstances of California's historic drought, as civic policy, private capital, and access to public resources wrestle for control of the future.

Guedel's own work, especially that of the most recent years, embodies the Excessivist zeitgeist from the perspective of fundamental meta-phenomena rather than the specifics of agit prop -- generating in lieu of rendering abstract works of art that express both the attraction and the absurdity of the profit-driven lifestyle. Made from acrylic on vinyl, Guedel's folded, stretched, ribboned, draped, floor-flooding undulations and taut geometries are gilded, sometimes splattered, partially transparent objects that are most definitely paintings, but escape painting's conventions. Addressing sculptural concerns through studied yet organic volumetrics and impolite intrusions into architectural space, 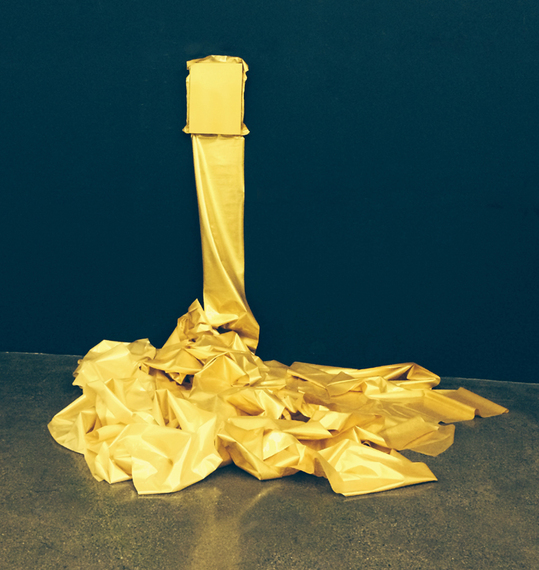 Guedel's exuberant ambivalence in creating avatars of luxurious decadence is a bit like sleeping in the devil's bed, using the language of toxic excess to develop an ironic beauty. But nevertheless, Guedel perceives a saccharine, gold-leafed kinship of appetites in a global generation of artists working today; artists who like him, employ formal embellishment and hypersaturation as both satire and satisfaction. This Initiative constitutes an acknowledgement of a movement beyond what a mere aesthetic trend would be. Some 20 artists, give or take, will be presented as participants and compatriots. Many will be shown on screens for logistical reasons, but their inclusion is invaluable for on-site context. For his part, Guedel undertakes social and political commentary in his own work, he confirms this. As for the other artists he implicates in Excessivism's purview, some are actively articulating resonant concerns, and some he posits as indicative of the accuracy of his intuition. 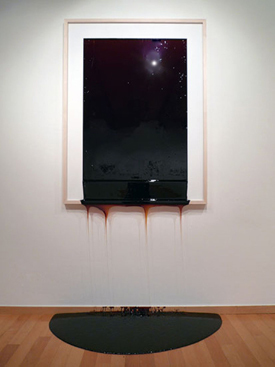 Guedel is quick to acknowledge the salient practices of artists like Ai Weiwei, Danh Vō and other, so to speak, figurative Excessivists -- those who operate in this conceptual and aesthetic terrain in representational, depictive, even narrative modes. But there is a very special sense in which an Abstract Excessivism like Guedel's keeps the focus on the role of the materials, whose supersaturation, optical obesity, and unnerving volume both express and embody the topic at hand. The paint, in short, represents the resources under discussion that are themselves in question; they are the protagonists of non-depictive narratives. 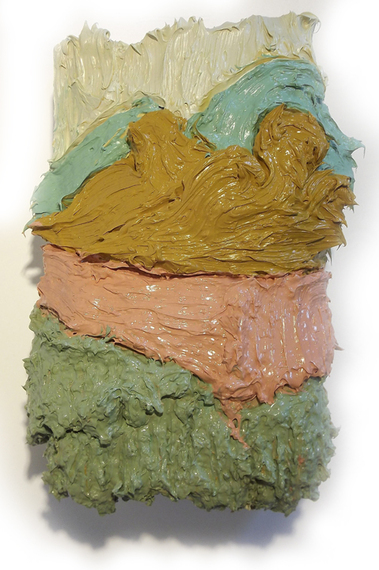 In October's iteration there are the paint-eaters, who use more paint than anyone could possibly need, focusing on its overlooked physicality, inhabitant of its own object-realm and not merely a tool or vessel, and deserving of attention to itself: Brett Baker, Andrew Dadson, Brigid Watson, Don Harger, Elizabeth Sheppell, Leslie Wayne, Michael Toenges, Michael Villarreal, Scott Richter, Zhu Jinshi, Christophe Baudson. There are spill-overs, compositions wherein the pigment or painted surface fairly erupts off the matrix, eluding the frame, cascading and accumulating on the floor like unfurled ribbon, stalactites, or hanging gardens: Guedel, Ian Davenport, Jonas Etter, Roxy Paine, and Fabian Marcacio who fill volumes of architectural space with rogue pigment. 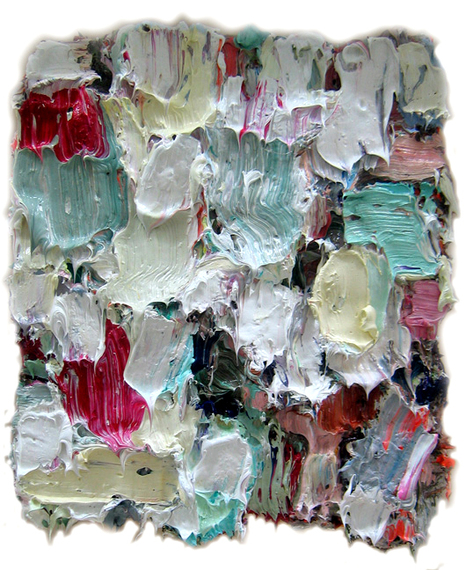 There are also those who tease materials all the way up to the boundary of constituted imagery, like sculptor Cullen Washington, Jr. who accentuates the abstract properties of overabundance through conceptual hoarding. Samvel Saghatelian's incursions into imagery go the farthest into representational terrain, variously including portraiture, edifices, maps, sex parts, food, text, and sort of everything in the world. His interest in Excessivism could be said to tend toward the psychological, the grotesqueness of too-muchness. He wears politics and vicissitudes on his sleeve, but nevertheless, his fraught aesthetic derives its visceral impact from the acrobatics of his expressive mannerism. And much like Guedel, Zadik Zadikian is specifically drawn to gold and gold leaf as both material and subject for his sculptures, installations, and architectural transformations. His blend of metaphor and metonymy is a shiny literary pun perfectly suited to the Excessivist mindset. What else is contemporary art but a giant pile of gold bars designed to be both investment and ostentatious showpiece? Or an entire glimmering, shimmering, glowing gilded room to which access is a privilege. The crux is, these works are gorgeous and affecting and never fail to incite covetousness in the viewer. 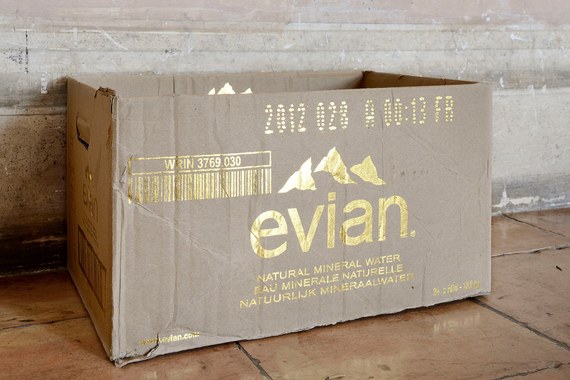 "The consumerist societal structure is inserted into the fabric of daily existence," continues the manifesto. "Excessivism is a reflection, an examination, and a critique of the capitalist system -- a world exempt of aesthetic, legal, commercial, ethical, or moral considerations, where absence of balance is a norm." This then is art that expresses itself with emotion. It attempts with optical force to ameliorate the death-cycle of decadence and depletion that has us in its thrall -- at the same time taking pleasure in its own comeliness, luxuriating in its own contradiction and wallowing in its own seductive paradox. The Excessivist Initiative is not a plea for austerity measures, but it is a reckoning. Proceed as you will.