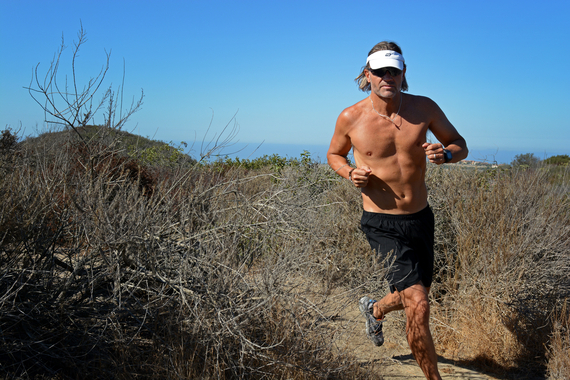 Reluctantly, I recently signed up to run the New York Marathon again this year. I am doing it with a close friend, Chris Klug, who is raising money for his Chris Klug Foundation -- a great cause that I am excited to be supporting.

I say reluctantly because I had long ago ticked marathons off my bucket list. I've continued doing a whole bunch of other trail races and adventures but had personally sworn off doing any more marathons.

For me it came down to two things: the type of training, and the associated nutritional requirements to support that training load (and running the actual race) -- basically, all the highly-refined carbs and fructose-based sugars you need to ingest to maintain the level of training required over all the months.

Marathon training isn't good for you. For starters, as a man it can lower your testosterone and HGH (human growth hormone). You eat foods you shouldn't be eating and do way too much of a single movement over way too long periods. Running long distances every day also does not make you an athlete -- it makes you a runner. And as you age, you need to focus on multiple levels of fitness conditioning: strength, mobility, flexibility, and intensive cardio -- and not confine yourself to a single sport or activity.

You also spend up to six months preparing for a single day and that six months is geared to having your athletic fitness peak on that one SINGLE day!

In 2012 I was signed up for the NYC Marathon that was cancelled due to Hurricane Sandy. There was another marathon two weeks later that I "could" have run -- but I had engineered my training and "tapering" to run on Nov. 1. Not November the 3rd or the 4th -- the 1st! After six months of training THAT was the day. To me, that's no way to exercise and stay healthy -- and it's not sustainable.

The other paradox of marathon training -- like many endurance sports including cycling and triathlon -- is that notwithstanding all the training and long hours on the road -- you don't necessarily always lose weight.

Maybe weight loss isn't your goal. You just want to train and exercise more to feel better -- and that's great! But it just doesn't make sense that you train so hard and it has zero impact on your body composition. "I ride 100 miles a week and I weigh just the same! -- What gives?" I hear you say.

Endurance athletes and others who hit the gym and road hard every day of the week are often of the mind that anything goes. They can eat whatever they want and not gain weight.

Actually, belief in the myth that athletes are handed a get-out-of-weight-gain free card because they are so physically active is just one reason why endurance athletes often gain -- and not lose--weight. In fact, it's the main reason, so let's start the discussion with food.

For one thing, exercise makes you hungry. Physical activity causes glucose to exit the bloodstream, resulting in feelings of hunger. When you've been piling on the road miles or maxing out at the gym, it is natural to feel like you deserve and can safely consume treats and extra calories. And let's face it: There are plenty of enticing high-calorie, high-sugar, high-fat foods on the market that can taste real good when you're hungry.

We justify those high-calorie (and typically high-carb) moments via something called "moral licensing." That's when individuals rationalize their splurge or overconsumption because they have sacrificed or "paid their dues" in another area. That is, "I can eat whatever I want because I ran 20 miles today," or "I deserve to eat this whole pizza because I spent three hours in the gym." Rarely do the thoughts run in the line of "Wow, now I can eat that extra bowl of broccoli!"

I see this all the time in Orange County where I live -- especially amongst the weekend warrior cyclists. I swear the OC weekend cycling fraternity spends more time sitting at Starbucks eating 1,000-calorie muffin meals than they actually spend on the road! Their training program seems to be 30 minutes at Starbucks for every 5 miles on the road.

It's also a mentality and culture promoted by race organizers who actively market the "feasts" that are offered after you finish a race as one of the reasons to sign up and participate. "You just burned 3,000 calories -- lets load you up again with free beer and 5,000 calories of sugar!" We've all been guilty of it.

Your food choices are the main factor in determining your body composition as well as whether you will have enough energy to train hard again the next day. Athletes who make wise food selections and time them properly can achieve their goal: having sufficient glycogen stores, which allows them to perform well, but not too much glycogen, which can result in weight gain.

When you train hard, your body is burning up the energy known as glycogen, which is stored in your muscles and liver. After a vigorous exercise session, your glycogen levels -- much like the gasoline tank in your car after a long trip -- are low. The trick is to replenish your levels but not allow your tank to overflow.

That means consuming a reasonable amount of carbohydrates right after a workout. In fact, the first 30 minutes or so after vigorous exercise is when the body is most efficient at taking up glycogen. Immediately before and during training also are recommended times to consume simple carbohydrates.

However, some athletes have been lulled into believing they can keep eating high levels of carbohydrates throughout the day. That's like keeping the fuel hose in the gas tank and continuing to refuel. Eventually the tank will overflow, and that's what happens with endurance athletes who keep up the carb intake, except their overflow leads to more glycogen than they can store or use up. The result is fat accumulation and thus weight gain.

Why? Because carbohydrates are the key stimulators of insulin, and insulin is key in determining how much fat your body stores. To prevent fat and weight gain, the best solution is to put the brakes on carb intake and focus on moderate amounts of protein and good healthy fats.

It seems counterintuitive: The less you sleep, the more fat and weight you can gain. The reason for this, once again, has to do with insulin, along with a few other hormones. Here's the rundown.

It's not uncommon for endurance athletes to fall short in the sleep category. After all, training takes a lot of time and it cuts into otherwise busy days. So these individuals tend to skimp on sleep in order to get everything done.

Lack of sufficient sleep however takes a toll on the body when it comes to fat and weight gain. For one thing, sleep deprivation hinders the production of a hormone called leptin, whose job is to make you feel full. And leptin prevents the activity of ghrelin, a hormone that makes people feel hungry. Therefore, too little leptin allows the ghrelin gremlin to go wild. Too little sleep also hinders your ability to make human growth hormone (HGH), which is in the fat burning business. When all of these hormones are out of balance, as they often are with athletes, the result can be more weight gain.

Enduring Stress as an Athlete

It's no secret that endurance training is stressful. Along with the stress of not fueling your body properly and not getting enough shut-eye, there are work, family, relationship, and financial pressures.

The first hormone that comes to mind when we talk about stress is cortisol. That's the hormone whose levels go awry when we don't get enough sleep and are under physical and/or emotional stress. In healthy, balanced individuals, cortisol levels rise in the morning and decline at night as another hormone, melatonin, takes over to promote sleep.

However, endurance athletes who are pushing the envelope can end up with high cortisol levels at night, which results in sleeplessness. That brings us back to what we talked about before: Too little sleep leads to low leptin. High cortisol levels also result in lower testosterone production and insufficient levels of this sex hormone are associated with weight and fat gain, fatigue, loss of muscle mass, lack of energy -- obviously things endurance athletes don't want!

To prevent fat and weight gain and stay on your endurance game, consider these tips:

• Limit your simple carbohydrate consumption to immediately before, during, or (preferably) after your intense workouts. Your focus at this time is recovery, so it's okay to have some healthy higher-glycemic foods along with a small amount of protein. The carbohydrate-to-protein ratio should be around 4:1. Eat natural as much as possible and avoid the energy gels and other processed foods marketed as "recovery" and "energy" foods.

• Evaluate your sleeping habits and be sure to get seven hours per night. This may mean rearranging your schedule, but it's well worth the effort. Go to bed and get up at the same time every day, even on weekends. Follow these 11 secrets to better sleep that I have previously blogged about.

• Take power naps if needed. There's nothing wrong with taking a 20-minute nap during the afternoon to help revitalize yourself. Naps longer than 20 minutes however can leave you feeling worse than you did without the nap!

• Consider some stress-reduction methods. Although resolving your lack of sufficient sleep will likely significantly reduce your stress hormone levels, you might also want to incorporate other stress reducing practices, such as yoga, tai chi, meditation, or guided visualization. In addition to lowering your stress levels, such practices may also improve your athletic performance.

As an endurance athlete, you need to be good to your body each and every day and night if you want to feel and perform your best. Unwelcome, worrisome, and unplanned fat and weight gain can be avoided if you follow a few guidelines that, in the long run, will help you continue to be at the top of your game.

Oh, and my marathon strategy for NYC this November? Minimal training and clean eating. For my nutrition I'm following the eating principles of the vegan ultra-marathon racer Scott Jurek -- and am cutting out all the Gu's, energy gels and processed foods. I also have a pretty good athletic base so I can step up my training in a pretty short window to increase my conditioning. I know I will finish, and I'm not trying to set any records. I'm doing it for Chris's Foundation and that's what's important.

Craig is the Founder and President of CooperativeHealth, The Prostate Cancer Institute and Performance Research Labs. He is a health & wellness advocate for 40+ men's health and the author of the upcoming Harper Collins book: "Your New Prime: 30 Days to Better Sex, Eternal Strength, and a Kick Ass Life After 40."