On Thursday, we celebrated 40 terrifying years of "The Exorcist." The iconic horror movie opened on Dec. 26, 1973, frightening legions of moviegoers who were rendered unable to sleep with their lights off. The comments section on our retrospective lit up with memories of cowering in dark movie theaters and worrying about the presence of lingering demonic forces. We've compiled some of the best reminiscences about the classic movie and the visceral responses it provoked. 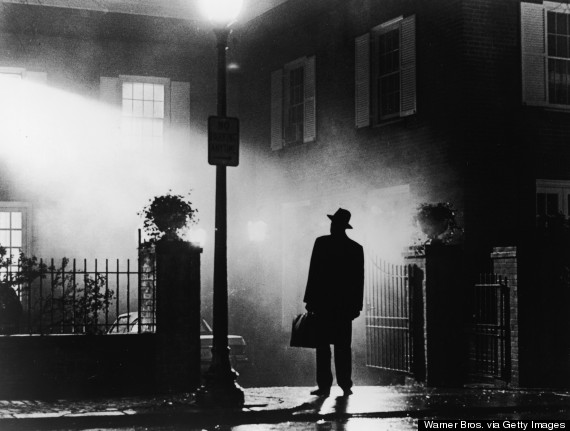 I saw the movie at the Cinerama Dome on Sunset Blvd. (don't think its there anymore) stood in line with my cousin, and we each dropped a tab of orange sunshine while we waited and then when in to watch the movie. It was so scary that we stayed up all night watching each others backs LOL those were the days. -- Rod P.

We were around 14 years old when this came out. My friend started swearing his bed was lifting up in the night after we saw this.... It messed us up for months! -- Larry K.

I saw The Exorcist at a late night screening and when I got home and finally fell asleep, one of the bed springs shot up through the mattress and scratched me. I slept on the couch the rest of the night after first jumping several feet into the air. -- Emma B.

Shortly after "The Exorcist" was released, William Friedkin came to WVU (where I was a student) for a talk and showed a few scenes from the movie and explained how the effects were created. The next day, I saw the film in a theatre for the first time. And even though I knew the "secrets" behind some of the effects, the movie still scared the living bejeebus out of me! Repeatedly! Then I didn't see the movie again until the director's cut (with the "spider walk" scene) -- and the movie scared the crap out of me again! It really is the scariest movie I've ever seen. -- Hank T.

To me, it's still the scariest movie of all time. It was one of those movies that stayed with you when you left the theater. I remember seeing it and having my eyes closed through much of it. After seeing it, whenever I heard that song on the radio, I think it was called Tubular Bells, it gave me chills. -- Debra Moreland

I recall watching this for the first time when I was about 12 years old. My mother seriously sat me down and warned me that it would be disturbing. I thought she was overreacting. Boy was I wrong. -- Shane C.

I saw it first in The Rialto Theater in Peoria, Illinois in 1974. 40 years later, I've seen them all and nothing else comes close to Exorcist in sheer terror. The only time I got a major shock again (after Exorcist) was in 'Alien' years later at the exact moment actor John Hurt gives bloody birth to the alien creature through his chest (the girl in the next seat jumped into my lap screaming!) Even the final scene in Stephen King's 'Carrie' where a bloody hand jerks out of a grave to snatch flowers from a kneeling mourner, and everybody in the theater was screaming -- all these take a back seat to the creeping horror visited on us by Bill Friedkin and Peter Blatty. They got everything right, and it still resounds to this day. -- Frank Okolo

My Mother took my brother and I to see it in a Manhattan theatre. We took the No# 2 subway train from the Bronx into Manhattan. I was terrorifed going home after seeing that subway line was featured in the movie. The scene when "the homeless man asked The Priest for a handout because he was an old alter boy"! One for the record books as the scarest movie of all times. -- Ronald C.

I remember seeing that movie I had my ears plugged and my eyes closed I think I was 10 my brother took me he was laughing I was terrified and crying to this day I can't watch it. -- Sherry V.

As a horror movie buff all my long life, I have seen them all, and I don't scare easily. Nothing scared me as much as the Exorcist when I saw it the night it was released. I was 22, and went home after the movie and closed all the drapes in the house--convinced that something might be on the other side looking in. The Exorcist was, and is, a terrific movie and will still scare the hell out of you. -- Aodhan R.

When my 25 year old mother and her infinite wisdom decided it was good idea to take her seven year old catholic son to see this movie she couldn't sleep for weeks because he would let her... After that, he was never the same and kept referring to himself in the third person... -- Sean T.

What are your memories of first seeing "The Exorcist"? Share your story in the comments below.