The exotic pet trade is an international enterprise that is responsible for unimaginable, inexcusable,and unforgivable pain, suffering and death. It is a topic of great interest to anthrozoologists, conservation psychologists, conservation biologists, and to many others interested in animal protection, and a number of people have asked me to write more on this topic. To follow up on these requests and my own interests in the global and incredibly lucrative exotic pet trade, I had the good fortune of interviewing biologist and medical scientist Clifford Warwick, Fellow of the Royal Society for Public Health, Fellow of the Oxford Centre for Animal Ethics, and Fellow of the Royal Society of Biology, who has been tirelessly working to put an end to this reprehensible business for more than 30 years. 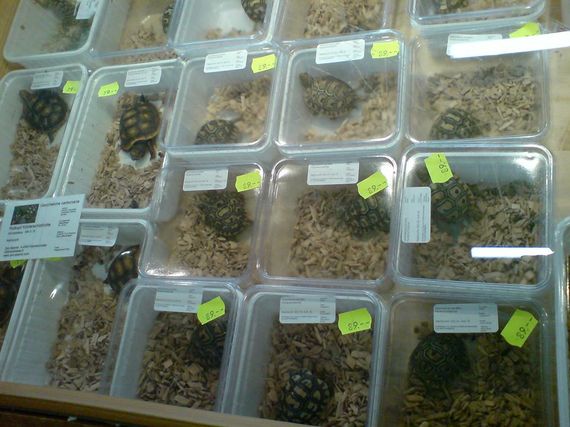 Marc Bekoff (MB): How did you get interested in the exotic pet trade?

Clifford Warwick (CW): As a boy I used to keep reptiles, and it took me until I was 14 to realize that it was wrong to do so. Since the 1980s I've worked as a biologist and field researcher of the wildlife trade, particularly reptiles, and much of my scientific work has focused on investigating the use - I think more accurately abuse - of wild animals as exotic pets. On the one hand, I've been very fortunate in never being out of work in an area of science that few are privileged to occupy. On the other hand, what I've had to witness - manhandled, diseased, traumatized and fearful animals - is often quite challenging, especially given that the pet trade is a completely spurious industry.

MB: Can you summarize briefly what the exotic pet trade is all about - how many animals and how much money are involved?'

CW: My extensive experience of the exotic pet trade has shown me a business based on destruction. From welfare issues surrounding capture, handling, captive-breeding, storage and transport to conservation and ecological damage wrought by greedy traders bent on harvesting any animal capable of sale, and a sector of people willing to confine them to bedrooms and lounges. In the UK around 47 million exotic pets are kept, mostly fish. Globally, the pet trade exploits over 4,000 wild animal species. The true scale and value are unknown, but what we have learned is staggering. For example, just the illegal wildlife business including both dead and live animals is estimated to be between $10 - 20 billion a year. One pet dealer alone that PETA and I investigated was tuning over $300,000 a month. All this is made possible by mostly trade-biased civil servants and lazy minded academics who directly or indirectly condone the emptying of nature for the fulfillment of curiosity.

MB: How broad and deep are the problems with the exotic pet trade?

CW: In my view, the objective evidence overwhelmingly confirms that the exotic pet industry, whether involving wild-caught (please also see and) or captive-bred animals is rotten to the core. By that I mean that in my experience no part of it is in some way unsullied by some aspect of greed, obsession, ignorance, malice, crime, dishonesty or misinformation.

MB: Did you have to go undercover to learn what you have?

CW: Frequently yes, but one doesn't always have to go underground and risk one's life to get a sense of what's wrong with the exotic pet trade. Often just looking at the 'best' traders can be very interesting. For example, consider the UK store chain Pets at Home, which claims to have 'leading standards of pet welfare', and yet has not once but twice been the subject of BBC documentary exposés into their management or mismanagement of animals. It seemed reasonable to me to ask the company, which regularly announces its 'pride' in its operation and the standard of its 'audits', the following questions:

1. total number of animals the company commission into trade annually?

2. total number of animals who get sick in their possession?

3. total number of animals who are treated by a veterinarian?

5. The same data relevant to questions 1 - 4 above for each of its suppliers (whether UK-based or based abroad)?

MB: How did Pets at Home respond?

CW: Their first reply was to state that "...our data is confidential and as such, we will not be sharing it with you...". Having then asked Pets at Home to clarify why these data (presumably harboring very good news confirming that animal disease and death at their company is not an issue) was so confidential, I was then told ...we do not intend to share any proprietary information with you nor to answer your questions" and ... I shall politely decline to respond to any further correspondence..." Curiously, responding to a formal complaint in 2013, Pets at Home declined to answer almost identical questions, and a reason they then included was that "...we would never disclose confidential business information to anyone outside of the business." So, it appears that animal deaths constitute 'confidential business information' that is unsuitable for public consumption?

MB: How bad are things with Pets at Home?

CW: Having refused to say how many animals die as part of their business, Pets at Home also failed to deliver on a recent promise at a Scottish Government meeting in November. The meeting was given pictures by a spokesperson for the Animal Protection Agency showing tiny Tupperware-like containers that the pet company use to house snakes and then challenged that these would not allow the animals to thermoregulate - a behavior-based physiological phenomenon that actually requires at least meters, not centimeters, to achieve. Pets at Home promised they had the data to prove their conditions allow proper thermoregulation - which is vital to health. But, as expected, they fell on their word, or 'stabbed themselves in the foot,' when they again refused to supply the data. That sort of nonsense happens on a daily basis with the pet trade. Because Pets at Home have chosen to keep their information about animal deaths etc. for the vast numbers of exotic animals they trade a secret, all this really says, of course, is that if the country's arguably most high profile 'flag-ship' pet stores are found seriously wanting by independent filmmakers, cagey about issues they don't want talked about, and content to make claims and promises but fail miserably to back them up, then as I see it, one can forget transparency and reliability from there on down.

MB: How do people working for the exotic pet trade advertise and sell the animals?

CW: The exotic pet industry in general is certainly not shy about making unsupported or blatantly false claims - especially when it comes to promoting pets. 'Consumers' are frequently misled into acquiring animals they can't look after well. Among the common examples of trade misleads are that exotics - such as reptiles - are 'easy to keep', or 'good for people with allergies'. Those falsehoods result in a lot of suffering and death, and not uncommonly also high vet bills, heartache, and dumping animals at rescue centers or directly into local habitat - where they can become invasive species. Over 75% of reptiles die in their first year in the home, and at least 51 types of foreign reptile and amphibian have been identified in waterways around London, UK.

MB: What are the worst and best ways to regulate the exotic pet business?

CW: Where controls are concerned, the pet trade would love to see self-regulation, because that would allow them to truly put all the foxes in charge of the chickens - assuming they don't peddle the foxes first! The plain fact is the pet industry has consistently proven itself to be shady, untrustworthy, resistant to moderation, and incompetent to responsibly manage its own affairs. They now regularly 'sneak' the term 'responsible' into their mantra, perhaps in the hope that it will stick convincingly for officials. Only two measures have been shown to work to control the extreme misconduct and animal abuse of the pet industry - outright bans and a system called Positive Lists. Positive Lists are the 'middle way' option, whereby animals can be sold so long as the independent scientific evidence shows that to do so would be safe for the animals themselves, the environment, species conservation and public health and safety (because many species are both physically dangerous and more often a human disease hazard). Indeed, Positive Lists are actually the normal way other industry works: manufacture of cars, electrical goods and aircraft, safeguards for drugs, provision of driving licenses - almost everything uses the Positive List system. The wildlife industry is one of the few legal (although 25-44% of it is illegal) businesses to have thus far evaded the controls demanded for mainstream activities. The Positive Lists, of course, strike fear into the hearts of animal dealers because they know that their adoption would require radical changes to the ways their sales tactics (historically a commercial free ride) would have to operate. Why should one of the world's most destructive industries escape controls insisted on for even benign commerce?

MB: How do you feel about people sharing their lives with other animals?

CW: Contrary to some ill-informed allegations, I am not opposed to people sharing their lives with animals. I am, however, opposed to the harm often inherent to that association, and concerning pets, nowhere is harm more apparent than within the business of selling and keeping exotic animals. If capturing, breeding and keeping wild animals were a good thing, believe me, I would support it. But my work as a scientist over four decades has reaffirmed my conclusions as a boy, that exotic animals - whether wild caught or captive-bred - do not belong in pet stores and peoples homes. I wonder how long it will take others to realize this same thing!

MB: Thank you for all the hard work you've been doing and good luck!

Here are some excellent and comprehensive sources about the extent of the exotic pet trade:

The Morality of the Reptile "Pet" Trade

How the exotic pet business has changed from ancient times - and it's not good news!

Pets: to keep or not to keep - perhaps EMODE has the answer

Morbidity and mortality of invertebrates, amphibians, reptiles, and mammals at a major exotic companion animal wholesaler

The conservation status of the world's reptiles