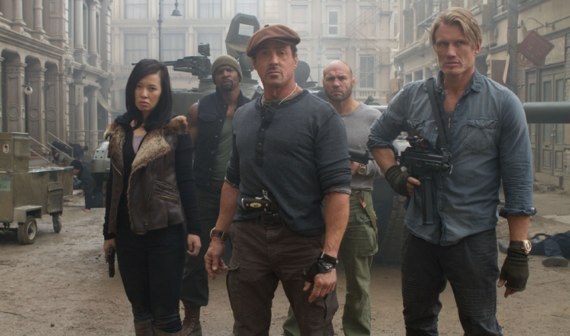 Way back in 2010, a movie starring Sylvester Stallone (Rocky II, Antz) came out called The Expendables. This movie turned out to be successful. As a rare treat, we are now being given the chance to see the further adventures of the characters from The Expendables in what is called "a sequel." The name of this "sequel," opening on Friday, is The Expendables 2. As a service to you, we ask and answer every question that you could possibly have about The Expendables 2.

Q: Is there a plot to The Expendables 2?

A: Sort of. Mr. Church (who will be refereed to as Bruce Willis from this point forward) explains to Barney (Stallone) that certain debts are still not entirely paid off. To make things square (in 2012, is that still a term?), Bruce Willis assigns Barney the mission of recovering a safe from the wreckage of an airplane crash in eastern Europe.

A: The location of a former Soviet nuclear warhead.

Q: Does this mission go as planned?

A: No. After the contents of the safe are retrieved, a mercenary named Jean Vilain (Jean-Claude Van Damme) steals it away from the Expendables team, setting up many, many, many, many shootouts.

Q: What's the best part of The Expendables 2?

Q: Trapped underground? Do the Expendables team up with the Gotham police department?

A: No, because I'm fairly certain that the Gotham police department is still underground.

Q: Do Arnold Schwarzenegger and Bruce Willis have large roles in The Expendables 2?

A: Well ... not really. Both show up in early scenes, but aren't really a part of the Expendables story until the final act.

Q: How many times have you accidentally typed "Expandables" instead of "Expendables"?

Q: How long did you debate just leaving it read "The Expandables" because it made you laugh?

Q: How is this first stage of Arnold Schwarzenegger's comeback to acting going so far?

A: Granted, he's been out of the game for awhile, but, this movie should give us all a moment of pause as we ask ourselves, "Do we really want Arnold back in our lives as an actor, or would we rather remember him as he was?"

Q: Does Arnold Schwarzenegger reference any points of nostalgia in The Expendables 2?

A: Unfortunately, that's all he does. And it's as awkward as it sounds. There are at least three Terminator references and he manages to even mention Rambo. I mean, Arnold's "I'll be back" jokes are starting to feel as stale and forced as Bart Simpson's "I didn't do it."

Q: If Jet Li and Liam Hemsworth happen to be my two favorite actors working today, will I be happy with their contributions to The Expendables 2?

A: First, if that's true, you may have more pressing issues than your post Expendables 2 happiness. But, no, you won't be. In the very short amount of time that Li is in this movie, he just looks pissed to be there. And Hemsworth has look on his face the reads, "Please, please let my character die so I don't have to be in this movie any longer."

Q: Who gives the best performance in The Expendables 2?

Q: Is there any chance Harrison Ford or Clint Eastwood will be in The Expendables 3?

Q: Is the phrase "rest in pieces" ever said in The Expendables 2?

Q: What movie came out on the exact same date as The Expendables that you wish were getting a sequel, too?

A: Scott Pilgrim vs. The World.

Q: Is Michael Cera an Expendable?

Q: Is The Expendables 2 a good movie?

A: Good God, no. But, if you want to watch some of your former favorite actors shoot guns, you will get what you pay for.

Q: How many unintentionally funny or awkward moments are there in The Expendables 2?

A: At least seven.

Q: What is one example of this?

A: While the Expandables Expendables are involved in a shootout (which is always), Chuck Norris, who has never been in the movie before this point, just appears out of nowhere to save the day. As if he just happened to be in the neighborhood. Then, after muttering something about being a "lone wolf," he just leaves.

Q: How many times does this exact same scenario happen during The Expendables 2?

A: Yes. But that's like asking, "Was the Apollo 14 mission better than the Apollo 13 mission?" In other words: Yes, it felt like Stallone finally accomplished what he wanted to do in an Expendables movie - but that doesn't mean it's the most remarkable of missions.

Q: What's worse, The Expendables 2 or that last analogy?

A: That analogy is much, much worse -- landing on the moon is always remarkable.

Q: If you're going to be blurbed in this weekend's commercials for The Expendables 2, what quote do you think will be used?

A: "As remarkable as a moon landing!" Mike Ryan, The Huffington Post

Q: At any point in The Expendables 2 does Bruce Willis sing about Seagram's Golden Wine Coolers?

A: No. But, let's go ahead and watch him do that anyway.

Mike Ryan is senior entertainment writer for The Huffington Post. He would drink a Seagram's Golden Wine Cooler right now if they still existed. You can contact Mike Ryan directly on Twitter.

PHOTO GALLERY
&#039;The Expendables 2&#039; Posters and Stills
Download
Calling all HuffPost superfans!
Sign up for membership to become a founding member and help shape HuffPost's next chapter
Join HuffPost 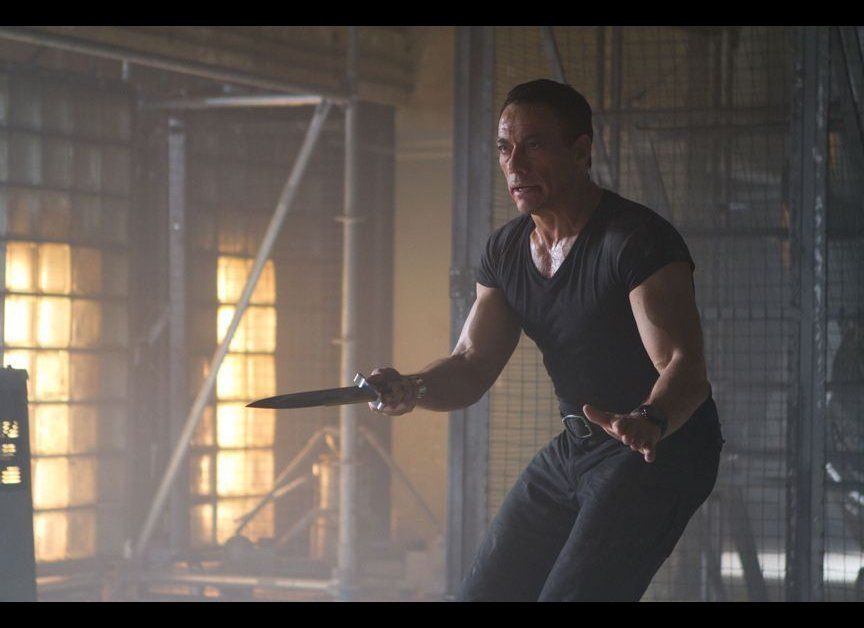