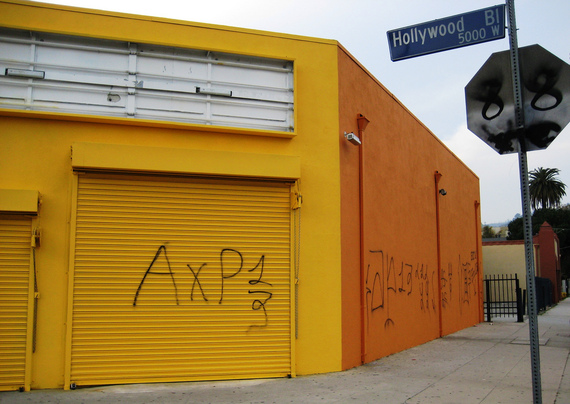 Image: Armenian mafia graffiti in Hollywood. Although the Russian mafia is the biggest overseas crime network from the former Soviet Union, gangs from other countries have an overseas presence as well. Author: UltraNow. Flickr

Russian officials began talking about diversifying the economy years before the price of oil began tanking in 2014.

But there's one commodity that Moscow has done a great job of exporting to the rest of the world since the early 1990s.

The trouble is, the rest of the world doesn't want it -- because it's the Russian mafia.

I began reading stories about organized-crime syndicates from the former Soviet Union taking root in other countries in the mid-1990s.

Now the syndicates' presence overseas is so pervasive -- particularly in rich nations like the United States and Europe -- that not a month goes by when you don't read a story about the havoc that gangs from the former Soviet Union are wreaking.

Although the Russian mafia is the biggest overseas crime network from the former Soviet Union, gangs from a number of other countries -- including Ukraine, Armenia and Georgia -- have an overseas presence as well. So I'll refer to the crime syndicates from places in the region besides Russia as CIS mafia -- CIS for Commonwealth of Independent States.

Those who study overseas mafia say two key differences between CIS gangs and, say, Sicilian gangs is that many CIS gangs get their marching orders from crime bosses back home and -- critically important -- governments in their homelands protect the gangs.

Western investigative journalists have written many stories about Russian politicians and government officials being on mafia payrolls -- and reciprocating by protecting the mobsters.

That's why Alexander Litvinenko, a former Russian intelligence officer whom the Russians poisoned with radioactive polonium 210 in London in 2006, coined the term "mafia state" to describe Russia.

One of the most outrageous signs of Moscow's protection of mafia is its refusal to extradite Russians to countries where they are wanted for organized-crime activity.

Spanish prosecutors made international headlines a year ago by issuing arrest warrants for 12 Russian officials they contend have helped the Russian mafia in Spain pull off their crimes. All 12 were close to Russian President Vladimir Putin, Western journalists noted.

At the top of the list were Vladislav Reznik, a member of parliament from Putin's United Russia Party; Nikolai Aulov, the deputy director of Russia's federal narcotics service; and Igor Sobelevsky, former deputy head of the Investigative Committee, Russia's FBI.

Spain spent a decade looking into the way the Russian mafia bought Spanish property to launder money made illegally in Russia. It recently filed money-laundering charges against a half dozen Russia mobsters living in Spain, with expectations there will be more arrests.

Spain issued its arrest warrants for the 12 officials close to Putin on grounds that they helped crime bosses in Russia make the illegal money that was laundered in Spain.

Russian authorities reacted by calling the charges in the Spanish warrants preposterous -- the typical Russian reaction when other countries accuse Russian big shots of crimes. And, of course, Moscow refused to extradite the officials to Spain.

If it was just Spain, the story of the Russian mafia could be dismissed as a one-off. But it isn't just Spain.

Germany is so concerned about what it sees as the growing threat of the CIS mafia on its soil that the head of its equivalent of the FBI took the unusual step of discussing the matter publicly this month.

Holger Munch noted that "Russian-Eurasian" organized crime has been expanding both in Germany and elsewhere in Europe.

One Russian mafia group alone has up to 40,000 members in Germany, he said, and CIS mobsters account for 8 to 10 percent of Germany's over-all prison population.

The Armenian mafia's grip on the United States has surfaced in shocking fashion with a series of mass arrests over the past five years.

Most of the arrests were in Los Angeles, which has the world's second-largest Armenian diaspora, although some occurred in other cities.

The majority of the suspects were Armenians, not Armenian-Americans, law-enforcement officials noted.

Unfortunately, the kingpins of the Armenian mafia are in the homeland, not the United States, authorities said in announcing the arrests.

Assistant U.S. Attorney General Lanny Breuer summed up the difficulty of exterminating the Armenian mafia on American soil by saying that its tentacles go beyond "international borders, reaching all the way back to the former Soviet bloc."

Underscoring the Armenian mafia's continuing threat to the Los Angeles area, the FBI and local law enforcement agencies have organized a Eurasian Organized Crime Task Force to investigate the crimes of mobsters from Armenia, Georgia and other countries in the neighborhood.

It's embarrassing to law-abiding citizens in the former Soviet Union that the word "mafia" is the one of the first things that pops into the minds of a lot of people whose countries have substantial populations of immigrants from the Commonwealth of Independent States.

I understand how they feel. The only consolation I can offer is that makes for good TV cop shows.