With the New York weather finally thawing, gallery visits are back on the agenda big time. When I received an invitation to the Anita Shapolsky exhibit, The Expressive Edge of Paper, it struck a chord. Of the 27 artists included in the show, I had some personal connection with a number of them. I printed at Bob Blackburn's workshop; I studied with Karl Appel's colleague, Jan Cox; I have been influenced by and enamored of Ann Ryan's collages; I have interviewed Kendall Shaw. The Shapolsky Gallery has been on my radar since the 1990s, specifically when I profiled "Women Artists of the Fifties." At that time the gallery -- which began its run in 1982 -- was still in Soho. It packed up and left the area in 1997, as high-end boutiques took over the majority of the neighborhood's real estate. The gallery now resides in a brownstone in the East Sixties.

On the ground floor space, immediately upon entering, is a vibrant and fluid watercolor. I was surprised to learn that the painter was William Saroyan, widely known as an author and playwright. The assistant showed me the book that was published in conjunction with the gallery's 2007 show entitled, The Writer's Brush. 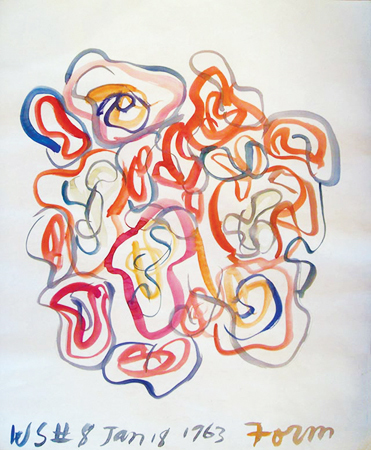 Adjacent to Saroyan's work is Ramapo No. 2 by Michael Dominick. It announces the curatorial premise: Pushing the boundaries of what is considered a work utilizing paper. Employing molten iron like paint, Dominick uses the gestural marks that are part of the Abstract Expressionist vocabulary. He fuses archival drawing paper to a plaster backing board. The markings are accompanied by a gold leaf rectangle that is both separate from and interactive with the rest of the imagery. 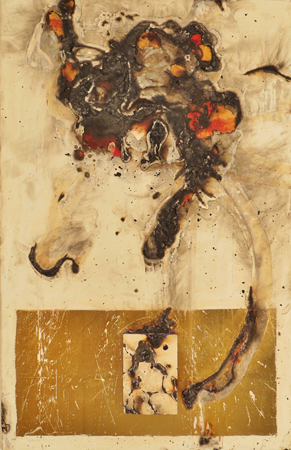 Ilya Bolotowsky is represented by two lithographs that reflect his iconic geometric style. From the same time period (1970s), juxtaposed on a nearby wall, is Sketch of New Iberia by Kendall Shaw. It stands as an individual work while evidencing a direct correlation to his current large-scale series of panels, Cajun Minimalist.

"Lima 89 (Homage to Franz Klein)," a photograph by Aaron Siskind, is a total departure from the social activist documentary photos he took when he was affiliated with the New York Photo League, such as the "Harlem Document." Through Siskind's relationships with abstract expressionist painters, he became a part of their movement. He built a body of work devoted to his interest in the "flat plane," becoming a pioneer and groundbreaker for future generations of photographers. 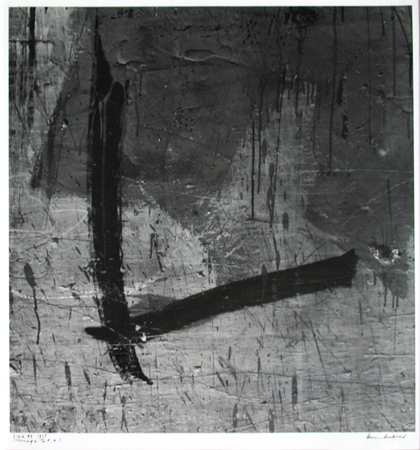 Joel Le Bow, also influenced by Franz Kline as both a teacher and a friend, offers a watercolor on paper from 2006. Painting in New York during the 50s and 60s, he has termed his current work "abstract surrealism." 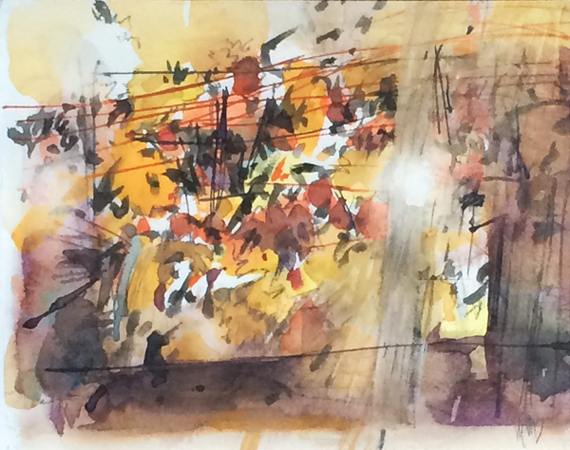 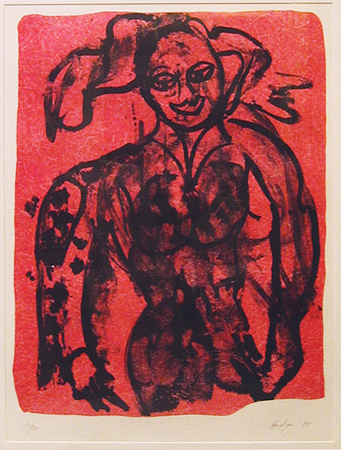 Proficient in various mediums including painting, prints, tapestries and murals, Amaranth Ehrenhalt, has three works in the exhibit. Fringe Benefit #3 is a tiered image in watercolor. The middle section is comprised of opaque units of deeply saturated color. The top and bottom bands depict Protozoa-like forms against the backgrounds of a muted palette. It pulls in elements of color from the center of the painting as free-floating accents. 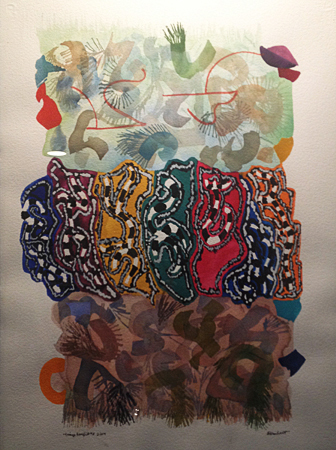 Karl Appel's lithograph, "Series of 10: Moving in Blue," employs the language of the post-war European CoBrA group, with which he was affiliated. The art movement, rejecting Surrealism, sought a vocabulary that would be expressive, spontaneous and anti-academic. Beyond his angular brushstrokes and use of vivid color, his imagery references folk art and "primitive" art. In this work, an animal form is discernible. 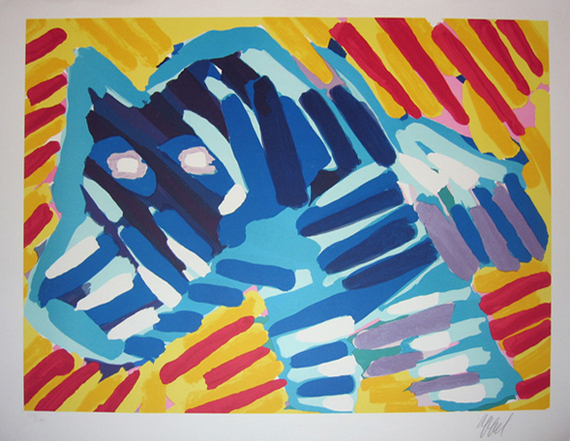 "The Moon is a Flower," a lithograph by Ann Ryan, was executed during the time she worked at the print workshop of Stanley William Hayter -- before she began making collages. It should be noted that a full range of printmaking techniques are included in the show -- aquatint, sugar lift and embossed surfaces among them.

A pair of images by Lawrence Calcagno demonstrate the connection between two pieces twenty-six years apart. Untitled, is a smaller watercolor on paper from 1956. It hangs next to the larger acrylic on paper, "Taos." The impastoed acrylic paint in "Taos" (1982) could read as oil. The paper is mounted on a linen background and it is framed without glass--giving it the feeling of a work on canvas. The floating circular symbol at the top of both pictures and the crisscross markings on the horizontal ribbons of hue reveal an intrinsic connection.

"Leaf Pool," a paper construction by Anthony Caro, is from a period that spanned 1981 to 2002 when he utilized paper. Widely known for his steel sculptures, "Leaf Pool" affords the opportunity to access his work in a different scale and format, while gaining awareness to his thought process. 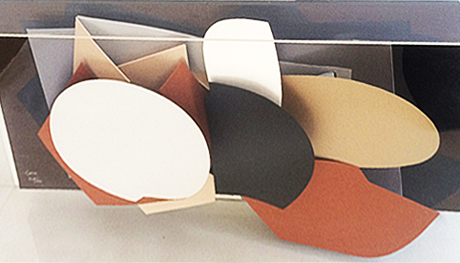 Recently, the New York Times featured an article about the convergence of big dollars and art fairs. It questioned the reality of a collector -- of modest means -- finding first-rate works. The "budget" of their "fictional wallet" was $5,000. Ironically, without all the hubbub and high pressure, that's exactly what I found at "The Expressive Edge of Paper." There were three pieces under $1,000; close to half the works were priced under $4,000.

When you think of the average monthly rent for a Manhattan one-bedroom, art wins out hands down.