The Russian Federation has an image problem. A large segment of the Western media has reduced the birthplace of Dostoevsky and Tolstoy to a caricature of invasion-happy, gay-bashing ultranationalists led by a shirtless man on a horse

So of course, the obvious solution is to deck the skies of Moscow with one of the most internationally recognized symbols of evil this side of the swastika. Yes, in honor of the final installment of the eighty-seven-part Hobbit film series, a Russian art group recently decided to crown the Moscow International Business Center with the All-Seeing Eye of Sauron. 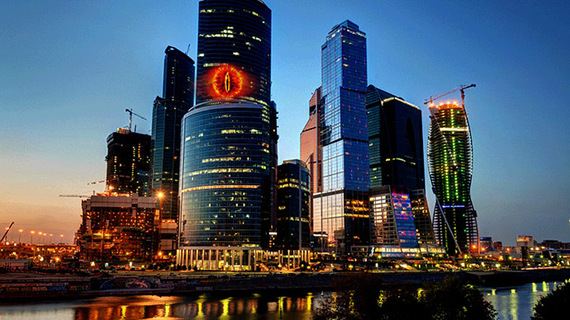 To be sure, this was not a government project; indeed, the group of hardcore Tolkien fans who constructed the Eye were taken aback by an outpouring of criticism whose intensity rivaled Mount Doom itself. If we take the Svechenie art group's spokesman at his word, the last thing they had in mind was politics.

If that is the case, then Svechenie is displaying a shocking geopolitical naiveté. Nothing says "Evil Empire" like the Eye of Sauron. True, other upstart Dark Lords have made a name for themselves since Tolkien first wrote The Lord of the Rings. Presumably, Darth Vader's genocidal home base would have been an equally powerful symbol, but Death Stars, like old Soviet color televisions, have an unfortunate tendency to explode. And as for Voldemort, even He Who Must Not Be Named trembles before the might of J.K. Rowling's legal team.

Nor can this be patronizingly chalked up to a local culture's misunderstanding of an imported work of art. If anything, The Lord of the Rings is one of those foreign classics that has so permeated the culture as to have become all but Russian. As someone who long ago found himself reading John Galsworthy's The Forsyte Saga and Astrid Lindgren's Karlsson-on-the Roof to remedy embarrassing gaps in his knowledge of Russian culture, I truly believe this is not an overstatement.

The Fellowship of the Wrong

Indeed, I find it difficult not to view the entire Eye of Sauron affair as a postmodernist prank. A tale of the forces of Light fighting the armies of Darkness, The Lord of the Rings easily lends itself to allegorical readings. Tolkien created the better part of his secondary fantasy world during World War II, allowing simple connections to be drawn between Mordor and fascism. But, as Michael Moorcock shows in his classic takedown of British pastoral fantasy "Epic Pooh," the implications of the triumph over evil, dark-skinned hordes by pasty-faced hobbits and porcelain-skinned Elves are disturbing.

So projecting the All-Seeing Eye of Sauron over the capital of a country that is developing a reputation for xenophobia and excessive media surveillance could seem like a rather pointed political statement. But if we throw Gogol into the mix of our wandering body parts, perhaps the Eye of Sauron is a bit too "on the nose"? Especially since the most active venue for deconstructing The Lord of the Rings' political implications is none other than Russia itself.

Though an official Russian translation of The Lord of the Rings would only appear in 1982, numerous Russian-language manuscripts of the trilogy had been circulating in samizdat since the 1960s. While the danger of being caught with an an unauthorized edition of The Two Towers could not reasonably be compared with the possession of, say, The Gulag Archipelago, Tolkien's unofficial circulation certainly added to his work's subcultural mystique. And if The Lord of the Rings had become the model for epic fantasy in the West, its centrality would only be greater in a literary environment that was largely inhospitable to elves.

Decades later, The Lord of the Rings finds a much more comfortable home on the Russian Internet, where elves are still scarce, but trolls come in all shapes and sizes. Among a very vocal subcommunity of bloggers and commenters, The Lord of the Rings has been transformed into a powerful interpretive framework for Russia's relations with the rest of the world. Identifying Mordor as a stand-in for the Soviet Union, they (to varying degrees of irony) embrace the identification of Russians with Orcs.

I have yet to discover the specific moment at which certain denizens of the Russian Internet make this connection (and, believe it or not, this is something I'm actually researching). But one clear moment in the sun for Russian Orcdom was the 1999 release of Kirill Yeskov's revisionist take on Tolkien, The Last Ringbearer. Yeskov, a professional biologist and avowedly amateur novelist, exposes Tolkien's account as a work of elvish propaganda. Mordor, it turns out, is a beacon of rationality and enlightenment besieged by the dying and decadent forces of magic. In other words, the Orcs (who are now simply another human ethnic group) are the good guys, Gandalf is a spell-casting Hitler looking for the "final solution to the Mordor problem", and Saruman is the only wizard smart enough to realize he's been on the wrong side.

Inverting the classics is nothing new; while The Last Ringbearer is a well-conceived semi-sequel to Tolkien, Gregory Maguire (Wicked), Jean Rhys (Wide Sargasso Sea), and John Gardner (Grendel) have done this sort of thing much better. Not only do these three novels work brilliantly as free-standing literary works, none of them has, to my knowledge, produced ressentiment-infused subcultures (though Maguire, in providing the inspiration for the shlock anthem "Defying Gravity," is guilty of much worse).

Yet if the political overtones of The Last Ringbearer are relatively restrained ("final solution" references excluded), the novel reinforces a political reading that some in the West might find baffling. Baffling, but brilliant: Internet users in the orbit of the "liberpunk" (либерпанк) subgenre of Russian science fiction (dystopias in which the world has gone to hell thanks to the triumph of liberalism and tolerance), have reappropriated not just Tolkien, but the simplistic, pop-culture-inspired metaphysics of American exceptionalism as articulated by Ronald Reagan and extended by George W. Bush. Fine, they say, we'll be your evil empire. But we'll do it with an irony and pride that you'll never entirely comprehend.

This logic reaches its apotheosis in book three of Maksim Kalashnikov's and Yuri Krupnov's four-volume paranoid rant, America versus Russia, which he gives the title The Rage of the Orc (Гнев орка) (2002). Kalashnikov and Krupnov dismiss the "common perception" that the orcs are supposed to represent Muslims: "Remember that the Orcs are 'Easterners' in Tolkien's Western consciousness." They continues:

The time has come to understand that, for the West, we have always been and will always be--unless the best people in the West change their consciousness--those revolting, savage Orcs, those barbarians for whom the earth has no place.

Given the rise of Russian Orc-ists, it's astonishing that the Eye of Sauron's appearance in the Moscow skyline is not their work. Handled differently, it could have been their PR triumph.

Instead, it was Svechenie's PR nightmare. As soon as word got out about the group's plans for the Eye of Sauron, Russian Orthodox Church Head of Public Affairs Vsevolod Chaplin denounced the Eye as a "demonic symbol":

Such a symbol of the triumph of evil is rising up over the city, becoming practically the highest object in the city. Is that good or bad? I'm afraid it's more likely bad. Just don't be surprised later if something goes wrong with the city.

For Chaplin, this is par for the course; the man can find demonic symbols in his breakfast cereal. And, to be fair, the Russian Orthodox Church leadership is not the only religious group to go overboard with its warnings about the forces of darkness lurking in popular culture. Recall the American fundamentalist Protestants fuming over the "satanic" magic in the Harry Potter series. But the Russian Orthodox Church hierarchy had been prevented from issuing such proclamations about mass culture for seven Soviet decades; in the last five years, it seems as though they're determined to make up for lost time.

In any event, Svechenie announced on its Facebook page yesterday that it was abandoning the project in the face of strong public resistance. The Eye of Sauron has been closed, and, unlike in the original books, it didn't even require a thousand pages of turgid prose and relentlessly merry ballads for this worthy quest to reach its completion.

The Orcs, however, remain at large.