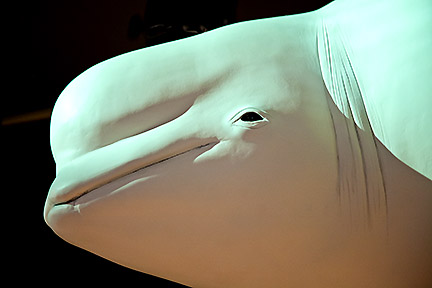 Let's put it this way: I once wore a parka in Hawaii. I have donned muk luks in Arizona. When other people are stripping down to thongs and bustiers with vermicelli straps, I wrap myself up like a burrito in winter.

So the idea of snorkeling in waters designed for polar bears was ... hmmm ... chilling. I signed up for the trip with Churchill Nature Tours, and then I started losing sleep over it. In my nocturnal misadventures, I was the same blue color as the Skype icon, and I transformed into a snow cone.

"This is ridiculous," I told myself.

"You don't HAVE to go," my husband Paul said.

But I did have to go. I wanted to snorkel with the white ones. Even if I ended up cryogenically preserved before my time.

So I flew to Winnipeg and from there I took a small plane to Churchill, prepared for the frigid winds, the numbing cold, the freezing water. I packed so many clothing layers that my suitcase bulged out like a can with botulism toxins. The only thing missing was an Inuit coat made of caribou, but I figured I could buy one up north.

When I got out of the plane, I hunched over against the wind -- but there was no wind. Nothing. I was suffocating in my two fleece jackets. There was, I swear, a heat wave in Churchill. It was in the high 80's. I could have packed a few bathing suits instead of my Admiral Peary togs.

The first day, I went on a 25-passenger boat to see the belugas (the boat is designed so there is nothing sharp to scrape or injure the cetaceans). I figured it would be reassuring to see the whales before taking the fatal freezing plunge. It was hallucinogenic. First we saw white specks in the water. Then the spines on the belugas' backs. Then we saw whole belugas. They frolicked and breached and popped up here, there, and everywhere in the waters where more then 1500 of them come to molt, eat and give birth. We were the only boat around, and I was breathless with excitement. 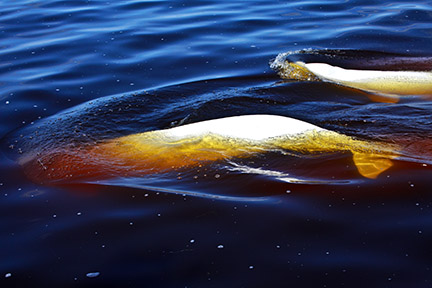 The beluga has a lopsided skull, and a melon -- a big, oily lump -- in the middle of its forehead. Unique in the whale world, the beluga's vertebrae are not fused, so it can turn its head around -- not like Linda Blair in The Exorcist, to be sure -- but sort of like a regular human. And it can change the shape of its skull by blowing air around its sinuses.

The captain of our boat put a hydrophone in the water, and there were speakers on the deck. We could hear the whistles, pops, chirps and clicks of the highly communicative and chatty "canaries of the sea." In two days, would I have the courage to freeze alongside of them?

The following day, I went kayaking with belugas. 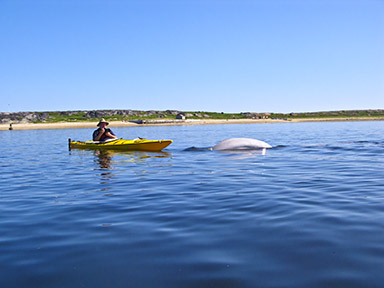 I was in a double craft, with Paul doing the heavy-duty paddling in the back, and me daubing at the water as though the oar was a mascara stick. Suddenly, we were surrounded by the white ones. We could hear them breathing. They came up to the kayak to check us out. We paddled over to them to check them out. It was like a big frat party. One day until I would turn into an ice pop.

I accepted the fact that I would be up all night, much as I accept the fact that money comes out of an ATM and smart phones need charging. It's just the way life is.

I also began to whine to anyone who would listen. I told them how much I hate the cold. How afraid I was of congealing. I was too frightened to be embarrassed.

I walked towards the water as though I were en route to my execution. I waved at the few humans I saw, imagining it would be my last view of homo sapiens. I was outfitted with a wet suit. It looked like a skinny black tube. It was the right size for me when I graduated high school, but it made no allowance for mature thighs and boobs and hips. It took me ten minutes to tuck myself in -- with help. Then I was handed a wet suit jacket. When it was zipped up, I felt as though I had emphysema. When I was given boots, I couldn't fold myself in half to put them on. I was immobilized by my wet suit. Gloves. Goggles. A hood. I was about as svelte as the Michelin tire man.

"Just go down to the boat," my dresser said to me.

Easier said than executed. I had all the flexibility of a robot. It took me 5 minutes to cover 20 feet.

"Please, if there is a benevolent God, then help me," I intoned.

Paul stretched out his arm and hauled me onto the boat, my stiff body making an arc. Then the boat took off.

"The water is pretty choppy. I don't think there will be any belugas out there," said the guide.

Yes! I had been willing to do it, but I didn't actually have to do it. Willingness counts for a lot, right?

I felt so stupid. Why didn't I load up at lunch, for my last meal? Why did I just have a salad with olive oil and balsamic vinegar? Why no obscenely rich cake topped with a pound of ice cream?

Paul hauled me to my feet. I flung myself onto the side of the boat, covering it like a slug. And then, as the heavens and the downgraded ex-planet of Pluto are my witnesses, I jumped.

But the truth is -- it wasn't cold. It was only potentially cold. The double wet suit, the body compression, the hood, gloves, goggles, boots -- they protected me. They cared.

And then I did what I had come to do. I looked below me, and there were belugas. Ten, fifteen, twenty of them. They swam under the boat, and under my body. In a moment of cross-species bonding that I will never forget, one of the large belugas rolled onto its back, and looked at me with its big, limpid eyes.

"Thank you," I said. "You helped me overcome my terror."

And there was a little whistle of admiration from the beluga, or at least I imagined there was.