This picture is the face of hunger in Northeastern Nigeria: A three year old girl on the ground, gathering single grains of rice and maize from the floor where they had dropped out of bags of food.

We had just finished a food distribution by the American University of Nigeria-Adamawa Peace Initiative (AUN-API).

It did not go as we had planned.

For the past seven months, as thousands of people have fled Borno, Yobe and northern Adamawa State for the peace of Yola, the university and members of our peace initiative have been distributing food. Recently, we have separated women from the men because some of the men had become unruly during the distributions. Today was different. The refugees were all with us for a church service prior to the distribution. 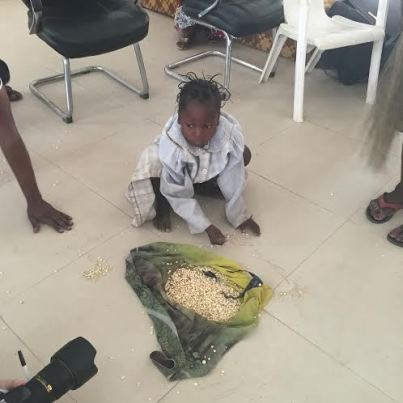 The visiting pastor had reminded everyone that we are all part of the human family, and that we should take care of each other. "Our enemy is not Islam," he said, "but hate and intolerance," an important message meant for all of us -- refugees, students and faculty from the University, as well as important members of the local Muslim community.

Then we began the distribution to about 1,000 people.

People were hungry and impatient. They did not care about our plans for distribution because they and their children needed to eat. We tried to stay organized -- women and children first, then pregnant women, then men with children.

The faces passing by us were full of despair, but they often said "nagode," which means "thank you" in Fulfulde, one of the local languages.

We thought we had finished when we looked up and there were about 100 small children -- boys and girls -- remaining in the church. They were not with a mom or a dad. They were alone. We had not counted on so many children being by themselves. We clearly did not have enough food left for all of them.

The fortunate ones came quickly and grabbed the bags of rice, maize and beans remaining. The smallest and most vulnerable were left to pick up the scraps -- the individual grains and kernels -- and wrap them in their clothes, or stash them in their pockets. They quickly ran out of the church, guarding their handfuls of food. We don't know where they fled.

This crisis has been building for at least a year. Now, it is a full blown humanitarian emergency. The University's active involvement began last March when the Emir of Mubi to our north invited members of our Peace Initiative for a visit. We were asked to bring food and clothing. After meeting with him, he took us to a large room next to his palace. There were over 500 women and girls waiting for us. When we asked them what had happened to all the men, we were told: "They were killed -- they were burned." From that day until we now we have been trying to tell this story -- to whoever would listen.

We have walked the halls of government from Yola to Abuja to Washington D.C. The U.S. government helped with some funding early in the crisis. Little else has been forthcoming from anyone. It has been the Founder of AUN, Atiku Abubakar, who has kept our feeding program alive with his own funds.

Where are the international aid agencies?

They are all here-the alphabet soup of agencies from the United Nations and the international aid community. They are taking care of a few thousand, mainly in the local refugee camps, which hold about 15,000 people. We, on the other hand, are now feeding over 250,000 -- the vast majority. They are dependent upon our small resources for food, for survival itself.

Many journalists have visited Yola recently. We have taken them to see the food distributions, and to visit houses full of refugees to show that, yes, the vast majority who have fled Boko Haram are living in our community -- with friends and family. One of AUN's drivers has 50 people living with him. In Africa, families take care of each other. These journalists have seen that our town is bulging with hungry people, but with few exceptions, they have decided that this is not a newsworthy story.

Last April the world's attention was focused on a small village in NE Nigeria-Chibok. When close to 300 female students were kidnapped, the outrage spread around the world -- for a while. Fewer paid any attention at all when in May, 59 boys were murdered in a secondary school in Buni Yade, in Yobe state. In a world beset with many crises, a small corner of NE Nigeria is allowed to go hungry, to quietly starve, even by its own government.

Hunger is often silent -- you can only see it in faces, and watch it as small children scramble for scraps of food. But it deserves the swiftest of action, so young children do not have to fight over a grain of rice.