This article is the second in a series written by Piper Perabo in partnership with WhoSay and the IRC about her experience with Syrian refugees in Greece.

Did you know that Albert Einstein came to the United States as a refugee? That's right -- one of the world's most recognizable geniuses was a refugee fleeing persecution from Nazi Germany.

There are two major disconnects in the conversation surrounding today's refugee crisis. First of all, I've heard people, including respected journalists, refer to the situation in the Middle East and Europe as a "migrant crisis." Let's set the record straight: Migrants are people who make a conscious decision to leave their countries to seek a better life elsewhere -- to find work, a better education, or higher standard of living. Refugees are forced to leave their homes because of conflict and are therefore protected under international laws augmented after World War II.

The second disconnect is that people with wildly overblown fears are setting the tone of the debate about this crisis and, as such, are distorting facts. The United States will not recognize persons who have participated in war crimes and violations of humanitarian and human rights law, as refugees. They are specifically excluded from these protection laws. 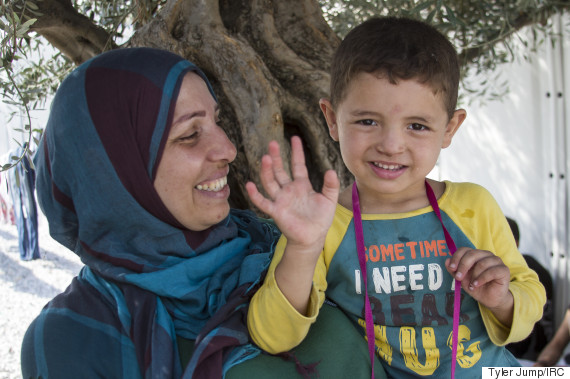 (Ali, 4, and his parents at the Kara Tepe transit camp on the Greek island of Lesbos. They traveled from Aleppo Syria. Ali lost his hearing when a bomb was dropped close to his home when he was only 5 months old. He is unable to speak or hear and requires surgery. After the bombing his mother moved him and his siblings to Lebanon where they have been for the past threes years saving money until they can make the journey onward to Europe.)

I recently traveled to Lesbos, Greece, with the International Rescue Committee, a global humanitarian aid organization that was created at the request of Albert Einstein, and was surprised by the kinds of people I met on the Greek shores. While there are nearly 1.8 million refugees sheltering in camps and urban areas in Turkey, many of those streaming into Europe have come straight from Syria; most are middle class, educated professionals, often fluent in English. Frankly, I didn't expect this.

The first place I visited was the Kara Tepe camp, best described as a gravel clearing near the municipal water station with a handful of bathrooms and Shelter Box tents. This temporary transit camp is meant to hold 500 people, but was housing nearly 5,000 when I arrived.

I asked the people I met where they came from; many named cities in Syria such as Damascus and Aleppo. One young man had been a translator for coalition forces in Afghanistan; his English was very good. An older woman, who also spoke English, was an elementary school teacher. One man owned a men's clothing store, another supervised a cement factory. 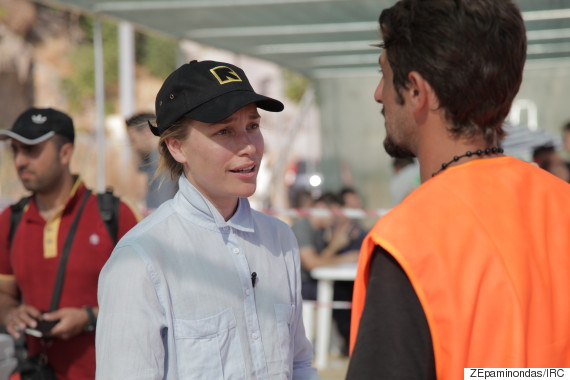 (IRC Voice Piper Perabo visits Molyvos in Lesvos, Greece, where she witnessed the arrival of refugees. She hopes to bring awareness about the mounting crisis and to help where she can.)

Most people told me they didn't want to leave Syria but were forced to abandon their homes because of the danger. Also, they couldn't operate their businesses, their water supply dried up, and their electricity was shut off. Because of the war, their children hadn't been able to go to school in two years. By this point, winter was imminent and they had lost hope that the war would end. Living in Syria was hell and they couldn't wait any longer.

I spent time with one Syrian couple -- a woman about my age and her husband, a computer teacher -- who cared for their precocious 4-year-old son and his grandmother, a former elementary school teacher. They had family in both Spain and Switzerland, so the family's goal was to emigrate to one of those countries. That was typical of the people I met; most wanted to go where their relatives lived.

One older woman confided to me that she was forced to leave her husband behind because he was an amputee unable to make the arduous journey. One of their children stayed behind to help him while the rest fled in hope of finding a safer place. Can you imagine? 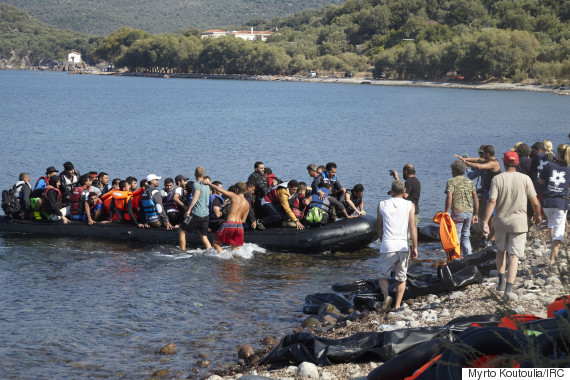 (A boat filled with refugees arrives on the beach of Lesbos, Greece.)

These people didn't want to leave Syria; but until the war ends, there is no way to survive there. "I love my country, but it's not safe," the owner of the clothing store told me as he walked away.

These people, who could easily be you and me, have been forced to flee their homes in order to survive. The least we can do is educate ourselves about what's really going on, report their stories accurately, and treat them with dignity and respect.

For more about the refugee crisis in the Middle East and Europe, head here.

Founded in 1933 at the request of Albert Einstein, the International Rescue Committee offers emergency aid and long-term assistance to refugees and those displaced by war, persecution or natural disaster. The IRC resettles refugees and helps them become self-sufficient.