The following was originally posted by Kevin in his blog, MyMediaDiary.com.

December 15th is my wife's birthday and, like a true Facebook lurker, I can't help but drift into her page and see the many greetings coming from all walks of her life. Patrice is one of those rare people whose default setting is funny, matter-of-fact, wise, generous, caring and, somehow, so modest she thinks she isn't really any of these. Small wonder that she's had the same girls in her scout troop for over ten years. Reading the posts of all the lives she's touched, I am impressed by how many agree with her wise husband. 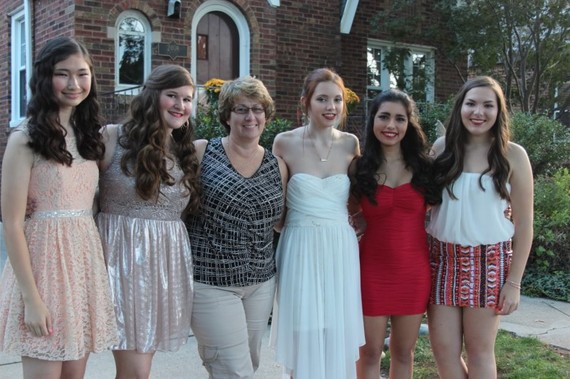 Patrice with some of her girl scouts heading to Homecoming.

Facebook has made it incredibly easy for me to be considerate. It sends me nudges about my friends' birthdays and has moved their big days to the top-right of my screen. When I first joined, it was late August 2008 and a month later when my birthday hit I was so surprised by not only the nice messages, but also the natural endorphin-rush that psychologists say we all get when someone says our name. I know one guy who changes his birthday a couple times a year, just to get that fix.

So, for the Hallmark stranger that I am, I find myself amazed that I don't even send out as many "Happy Birthdays" for free on Facebook as I could. I might rationalize and say that I don't use it very much, but that's not true. The area on my phone on which sits the Facebook app is nearly a dent on the screen. So for the folks I've forgotten to wish happy birthday I apologize; for those who wish me well on my day I thank you; and for the people who write something special -- as I've seen throughout the day on my wife's wall -- you are truly special.

If nothing else, your birthday, like the end of the year, is a time to reflect. And Patrice's birthday falls at the time of the perfect storm of reflection with the alignment of Christmas, New Year's, snowstorms, gift-buying and gift-giving.

And, as pitiful as I am about sending them, I'll admit that greeting cards are indeed worth hanging on to -- particularly if people do more than sign their name. But even just a signature carries weight. The card was chosen, sealed, stamped and mailed -- four steps beyond anything that I ever do. And for the recipient, they're nice to open later and re-read, when things calm down.

Perhaps the potential energy of amassed Facebook messages and greeting cards can pull us out of a funk and convince us, like Clarence on the bridge in It's a Wonderful Life, that we do indeed matter. We just have to be able to look at the scope and volume of your impact -- even if a guardian angel in a nightshirt isn't handy.

When my father died in an automobile accident in 1997, he was driving a company car and had hung-up from a business call just a minute before the other driver's car ran the red light. That small piece of data on the phone record made a significant difference nearly 18 months later. 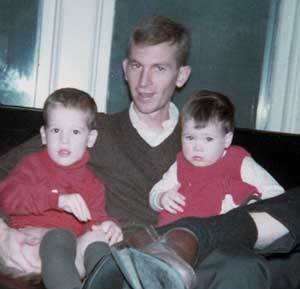 Jim Walsh, in the early innings of fatherhood in 1967.

Since he was a salesman and didn't have an office, deciding when he was or wasn't "on the job" wasn't as easy as checking a punch-card. Had he not made that one-minute call leaving a message for a client's voice-mail, the insurance company would have argued that his 9-5 job hadn't begun yet. But the phone record moved the settlement into a different realm of argumentation.

We had to prepare a binder of evidence of what the value of my dad's life would have been had he lived beyond his 57 years. The insurance company never called my mom to let her know that there was coverage in the event that its cars are involved in accidents with drivers with minimal or no insurance. It took a two-minute call from my uncle, an attorney, to discover that clause. The next part was getting the company to admit my father had more worth than its first, minimal offer.

It's a blood-chilling process and I quickly learned why there are glass tabletops in attorney's offices. You can look someone in the eye without doing so. The binder was sent to the insurance company's attorneys who had reviewed it before the hearing that was threatened, but probably would not occur, assured my uncle.

The police report of the accident
Witness statements indicating that the other driver had indeed run the light
Coroner's report
Death certificate
Anticipated earnings of my dad through retirement
Retirement pension benefits and social security
Anticipated age my father would reach, based on his medical records
Greeting cards we gave my dad for Father's Day in 1977

Sorry? What was that last one? Greeting cards? They weren't kidding. Somewhere in the middle of the objective, rather ghoulish formula above, we were advised to add evidence that my sisters and I loved our father -- as if that might qualify us for 25 percent savings.

It's one of the strangest assembly of data I'll ever see and it's down the basement. I haven't had the nerve to open it in 15 years. It's too weird. But it served its purpose and was the reason for the first offer, the rejection, the counter-offer and then some. Apparently, my uncle explained, the insurance company was counting on a certain amount being paid and any money its attorneys could reduce that payment was considered a victory for their side. As I said, pretty ghoulish.

What Really Counts Up There?

I've often wondered how that ultimate bouncer, St. Peter, would greet us with his clipboard and tally up the pros and cons checking if we'd made the VIP list before letting us past the velvet rope. Would he have a binder similar to my father's?

Albert Brooks' little-seen but brilliant film, Defending Your Life, offers a similar legal atmosphere as nine days of Daniel Miller's life are examined as evidence that someone is either allowed to move on or be sent back to try again. As folks on earth only use 3 percent of their brains, mostly devoted to fear, it takes many lifetimes to build up intelligence. In this scene, Miller discusses the process with his defense attorney Bob Diamond, played by Rip Torn.

The film uses the same emotional flashbacks seen so often this time of year with George Bailey as well as its influence, A Christmas Carol. Perhaps it's that end-of-year, end-of-season reckoning we all do -- while the magazines, from Time to The Star chime in with tallies from "Man of the Year" to the "The Top 10 Worst Celebrity Bathing Suits of 2013."

That look-backward can be sobering, painful, heartwarming and confusing -- all at the same time. Perhaps we'll only be asked to use nine-days as evidence. Perhaps they'll just look over our birthday greetings on Facebook and declare, like loving brother Harry, "To George Bailey, the richest man in town!"

So, I'm admittedly guilty, your honor, of being a gold digger, married to the wealthiest woman I've ever known.