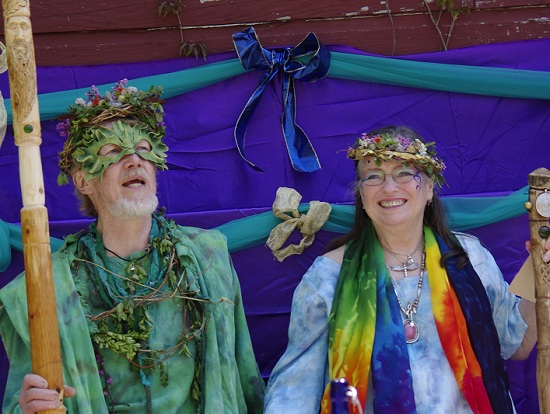 Last year at Maytime I wrote about my region's vibrant Faerie Festival scene. That scene has roots in much older May festivals, which go back to the Middle Ages and beyond. These older events were intended to celebrate the return of spring, of warmth, of flowers, of singing birds and buzzing bees. Thus, they were outdoor frolics with trees and flowers, singing and dancing, and...well, to be honest, they were "lusty."

In fact, when Lerner and Loewe wrote the song "The Lusty Month of May" for the musical Camelot, they were mining late medieval descriptions of Maytime frolics. Officially, Camelot was based on The Once and Future King by T. H. White, but this song was inspired by one of White's sources, Thomas Malory's Le Morte D'Arthur:

The month of May was come, when every lusty heart beginneth to blossom, and to bring forth fruit; for like as herbs and trees bring forth fruit and flourish in May, in likewise every lusty heart that is in any manner a lover, springeth and flourisheth in lusty deeds. For it giveth unto all lovers courage, that lusty month of May. (Book XVIII, ch. 25)

"The Lusty Month of May" from the film version of Camelot

Malory's romance and Lerner's play (but not White's novel), feature a "Maying," or May festival, which leads to Guenevere's affair with Lancelot. In Malory, the queen and her entourage ride into the woods and meadows and cover themselves with vegetation:

So as the queen had Mayed and all her knights, all were bedashed with herbs, mosses and flowers, in the best manner and the freshest. (Book XIX, Chapter 2)

Malory isn't describing the rituals of some far-off era, but the customs of his own time. Chaucer, who wrote "The Knight's Tale" less than a century before Malory's book, there describes two similar Mayings, in which characters bedeck themselves in leaves and flowers. In his lesser-known work The Legend of Good Women, Chaucer goes further, describing a Maying in which he goes to the meadows at dawn to satisfy his fanatical love of daisies; after rolling around with the flowers until evening, he imagines he sees Zephyrus, god of the west wind, and Flora, goddess of flowers, before going back home and sleeping on a bed of flower petals. (It gets even weirder the next day, when Chaucer returns to meet the green-clad God of Love and other allegorical figures.) 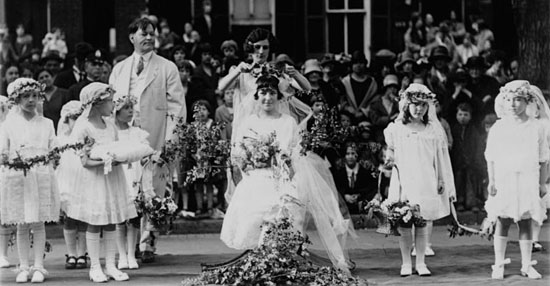 Dorothy Zimmerman, as Spring, crowning Irma Sweeney as the May Queen at the May Day festival at the Neighborhood House, Washington, D.C., 1925. This photo is in the Library of Congress's National Photo Company Collection, which has no restrictions on publication.

Although Chaucer's Mayings occur on May 1, such festivities in the late Middle Ages could occur as early as St. George's Day (April 23), and as late as Whitsun or Pentecost, with May 8 also being a popular day. In addition to the gathering of flowers and green branches ("bringing in the May"), English May customs included Morris and Maypole dances, both mentioned in early English texts. By the sixteenth century, May celebrations became associated with Robin Hood, and with such pageant characters as the "Green Man." Communities selected a king and queen, or lord and lady, of the May. In both England and the Celtic countries, Mayday was also associated with the fairies; in Celtic lore the fairies had special power at May, and Shakespeare's A Midsummer Night's Dream (in which characters "observe the rite of May"), demonstrates the connections between English Mayings and the realms of Faerie. 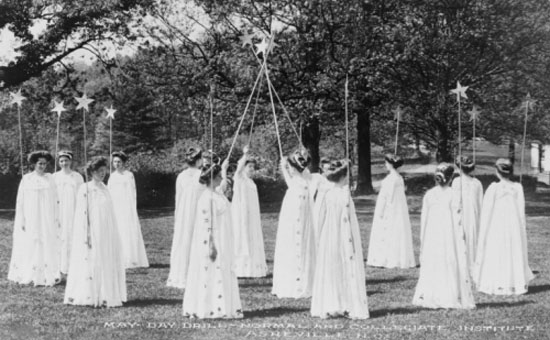 Faeries with magic wands at the May Day drill - Normal and Collegiate Institute, Asheville, N.C., 1921 or before. This postcard was published before 1923 and is therefore in the Public Domain.

Apart from bonfires, no Mayday custom can be demonstrated to have survived from pagan times. However, both proponents and opponents of Mayday in medieval England make open reference to pagan religion as an influence. Chaucer populates his Maying with classical pagan gods, while opponents such as Phillip Stubbes consider the Maypole a "stinking idol" and May festivities "heathen." Most historians relate Mayday to the Celtic festival of Beltane, but in fact, all three ancient cultures that most influenced Britain, the Celtic, the Germanic and the Latin, had celebrations at the start of May. The Romans celebrated Floralia, a practice strongly echoed by Chaucer and Malory, and the Maypole seems to have a Germanic origin. Thus, the English Mayday was a hybrid holiday with real or imagined elements of all these pagan traditions, combined with later Christian practices. 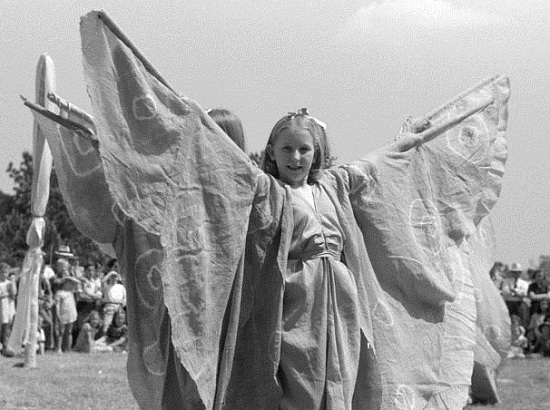 Butterfly Faeries at the May Day pageant in Siloam, Greene County, Georgia, 1941. This photo was taken by Jack Delano for the U.S. government, and is therefore unprotected by Copyright.

English Mayday customs arrived in the colonies early. A Maypole was famously erected in Massachusetts, by Thomas Morton's breakaway colony "Merrymount," (now a neighborhood of Quincy) in 1627. An eighty-foot tree trunk with a pair of antlers attached, it was intended to be visible from afar. Morton's Mayday celebration was both pagan and lusty, including performances of libertine drinking songs and odes referencing Classical deities. It attracted the scorn of the nearby Puritan colonists, and Morton was arrested and shipped back to England. 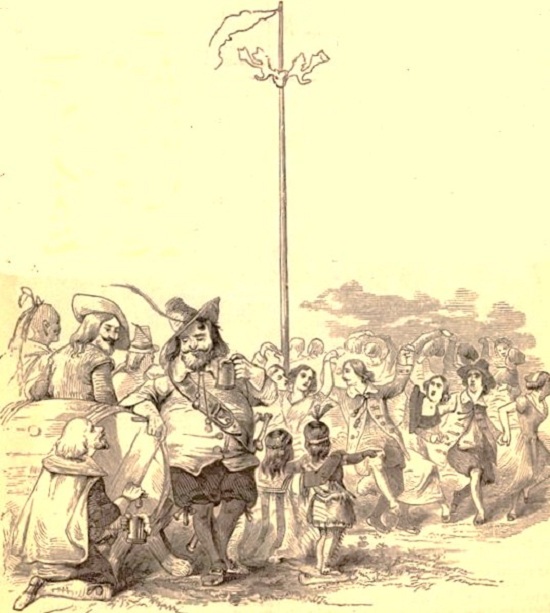 This illustration of Merrymount's Mayday by an unknown artist was published ca. 1857, and is therefore in the Public Domain

In eighteenth-century America, Mayings were rare, but in the mid-nineteenth century, Mayday made a comeback. This time, it was imagined as a tame but enjoyable frolic, in keeping with the romanticized vision of "Merrie England" so popular at the time. People dressed in elaborate costumes as kings, queens, Robin Hood and fairies, re-imagining older Mayday celebrations. The lust, for the most part, was out, and family-friendly activities were in. In fact, from 1928 until 1960, Mayday was celebrated as Child Health Day, allowing schools and communities to promote health and exercise through the folk dancing and outdoor play already associated with the date. Mayday was also popular on college campuses, especially women's colleges, where Mayday pageants became a highlight of the year. 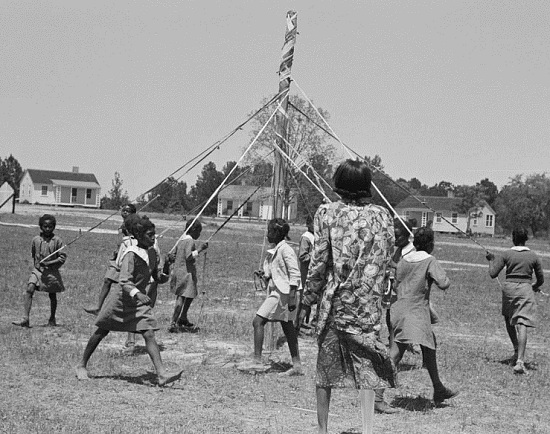 Rehearsing the maypole dance for May Day, health day excercises, Gees Bend, Alabama, 1939. This photo was taken by Marion Post Wolcott for the U.S. government, and is therefore unprotected by Copyright.

Today's Maytime Faerie Festivals, including Spoutwood Farm's May Day Fairie Festival (the oldest Faerie Festival in the country), the Maryland Faerie Festival, and the New York Faerie Festival, are outgrowths of this vibrant May tradition. They feature kings and queens, Maypole dances, flower garlands and beautiful costumes. Characters such as the Green Man and Robin Hood appear. Although the occasional lusty couple can be seen smooching in the grass, that's as far as it goes; these festivals are fun outings for the whole family. You might even see a pagan god or two! 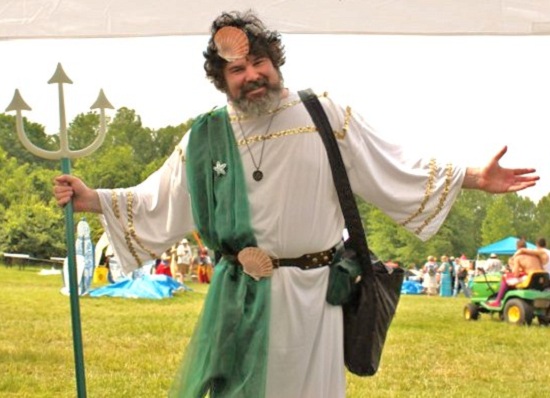 For more on Mayday, view this great video from the Library of Congress's American Folklife Center: