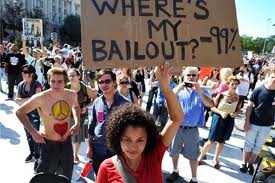 For those who are objective and unemotional it was easy to see this coming. The Occupy "movement" (and I use that term generously) has spiraled into irrelevance and relative obscurity. And it's a shame, as much of its message had broad resonance which could've been harnessed into significant power and influence in Washington. Instead, it became a whole lotta nuthin' over nuthin.'

So what went wrong?:

1. The "Occupy" Factor: Successful protest movements aren't about occupation, per se. This movement was too tied to its home base, a small symbolic tent-city near Wall Street, and in other similar parks in Boston, San Francisco and other cities. In order to rally scalable national support people needed to see marchers taking to the streets rather than largely hanging out in a park, which served, rightly or wrongly, to portray the Zuccotti Park inhabitants as drifters, vagrants and freeloaders rather than committed protesters. Much of the attention was not over its message but over the communal aspect of park life. Successful protest movements aren't about camping out, book sharing, eating, and "talking to each other," as one organizer told me. As a friend of mine joked, Zuccotti looked more like Bonnaroo. It confined and defined the message in a way that was limited and negative.

3. The Wrong Message: While I understood and agreed with much of what this movement was about, I think it took a deadly turn when it essentially turned into a "rich bad/poor good" theme. That wholesale indictment of everyone in the "1%" (including passionate, dedicated, extremely generous liberals like George Soros, Warren Buffett, Bill Gates and the Kennedys) was the wrong message. The mission shouldn't have been class warfare, but equality and fairness for all through reasonable government regulation and taxation.

4. No Agenda: While the organizers prided themselves on the fact that they had no real agenda other than to vent the nation's collective anger over the economic divide and injustices on Wall Street, this lack of clear, stated demands was a huge mistake. It should've taken a lesson from the Tea Party movement, which was and remains powerful, articulate and clear in its demands and which sent 63 congressmen to Washington in an election year to advocate and legislate its small government, less taxes agenda.

And that last point is the real shame of it all. In an election year as significant as this one, the Occupy movement is as good as dead. It will have achieved nothing legislatively, it will have elected no one and, in the end, it has had no material impact on American life. Nothing, that is, if you measure it against all other successful protest movements.