In the decades since Lady Liberty first lifted her "lamp beside the golden door," Americans of all political persuasions have supported their fellow citizens in the face of age, sickness, poverty, or loss of employment.

The Social Security Act of 1935 created a system to provide for Americans in retirement. The "Great Society" domestic programs extended that legacy in the 1960s. Medicare and Medicaid were created. The civil rights movement shaped a more perfect union. And public housing gave shelter to millions who might otherwise have languished in dark and dangerous conditions.

As a lifelong Democrat, I am proud to support such programs. I benefited from public housing, public schools, free health care, and benefits for veterans. But I recognize that the traditional Democratic approach to public assistance has failed, because Democrats have seldom been willing to ask for anything in return for that assistance.

The results speak for themselves: As many as 80 percent of the adults living in public housing are unemployed (full time); 40 percent don't have a high school diploma or a G.E.D., and more than half don't even have driver's licenses. In no other neighborhood in America, except public housing, would those disgraceful statistics be acceptable.

Republican approaches have been equally wrongheaded. Insisting that individuals "pull themselves up by their bootstraps" ignores that most don't have the education, savings, and family support to do so.

Whatever their politics, Americans must recognize that the costs associated with how we currently help those in need are not sustainable.

According to a 2010 report by The Heritage Foundation, the War on Poverty launched in 1964 consumed 1.2 percent of gross domestic product (GDP). By 2013, it consumed 6 percent. Over the next decade, the report predicts, means-tested welfare spending will exceed $1 trillion annually. Washington's anti-poverty efforts are a bureaucratic behemoth costing billions to operate before a single dollar of support is given. Some may dispute those figures, but from where I sit there is no dispute that the current system has made our problems worse.

I grew up in public housing in Worcester, Massachusetts. My family, like millions of others, accepted help but did all we could to move on from public housing. Unfortunately, over time, a system that was intended to be transitional has become a permanent way of life.

For many, public housing has become a perverse legacy handed down from one generation to the next. It has trapped residents in a spiral of intergenerational poverty from which few are able to find a path out. Today, three, four, even five generations of the same family have come to rely on public housing.

For the past 13 years, I have managed the city's public housing. I still believe in public housing, but by asking too little of our tenants we have failed to help them develop the confidence and skills that they need to become self-sufficient.

If we continue on our current path the results are predictable: Another generation of Americans will remain stuck in poverty.

In Worcester, we chose another path. We launched an intensive case-management program, called A Better Life (ABL), to move families toward self-sufficiency. Our program required participants to go to work, attend school or provide 30 hours of community service each week. 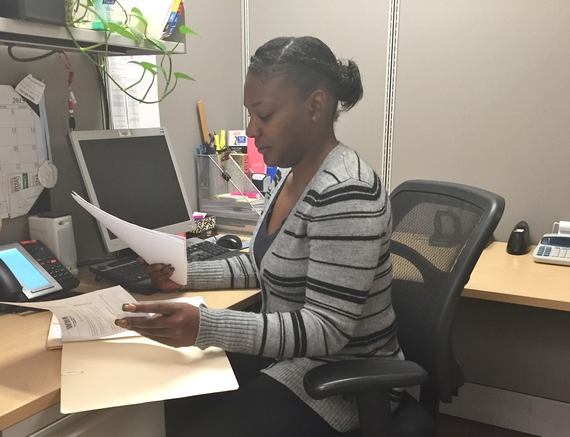 A participant in the Worcester Housing Authority's A Better Life program builds her skills working as a clerk.

Initially, we offered our program, on a voluntary basis, to more than 1,200 families. Unfortunately fewer than 30 families were willing to roll up their sleeves and do the hard work necessary. Nevertheless, the results were so dramatic that we expanded ABL and offered an admission preference to anyone on our waiting list. If applicants agreed to the work/school requirement, they would be placed at the very top of our list. Surprisingly, although many families on our waiting list were homeless, fewer than 7 percent agreed to participate in the program.

Over time, we enrolled hundreds of families in our program. The results far exceeded our expectations. Employment rose from 35 percent to 75 percent. Personal income nearly tripled. Enrollment in education programs also tripled.

Based on these results, we have expanded our program again and now require all current residents - except seniors and those with a disability - to meet a work or education requirement. We offer training in financial literacy, work readiness, domestic violence, conflict resolution, and parenting. Able-bodied residents trying but failing to find work are offered community service opportunities.

ABL works because we believe in the ability of our residents, set high standards, hold them responsible, and help them reach their goals. We don't claim our model is the only one that can work. But to secure the blessings of liberty for all, we need new answers for the millions of Americans in public housing yearning for a better life.

Next post in this series: A Model for Breaking the Cycle of Intergenerational Poverty in Public Housing.

Executive Director of the Worcester Housing Authority and Former Mayor of Worcester, Mass.