I never thought quitting was in my DNA. I never thought about giving up. I was strong. I played football at West Point. I was an officer in the U.S. Army. I had a wonderful marriage and two beautiful children.

But war can change you. War can turn you inside out. And adversity can either break you or make you stronger. It is a lesson thousands of our men and women in uniform have learned over the last decade, a lesson that began for me one day in Iraq in 2007.

The ride back to Camp Liberty, our battalion headquarters northeast of Baghdad International Airport, was supposed to be routine that May night. Not safe -- in 2007, no Iraqi road was safe -- but the paved, four-lane highway we were driving was considered less risky than most.

My men and I -- I was commander of the U.S. Army's 2nd Battalion, 32nd Field Artillery unit -- had just left Forward Operating Base Falcon, eight miles south of Baghdad's Green Zone.

We'd gone there to attend a memorial service for two soldiers in our brigade who'd been killed by an IED -- an improvised explosive device, a crude but deadly roadside bomb used by insurgents.

There were four M1151 armored Humvees in our convoy, each with five soldiers. I was riding shotgun in the third Humvee.

And then it happened. We ran over an object on my side of the vehicle. An IED buried under the asphalt. It happened faster than the mind can process. The flash and the boom, in that order.

I remember being propelled out of the 400-pound, two-inch-thick door of the Humvee. I felt a galvanizing rush of adrenaline. It was like one of those scenes in "Saving Private Ryan," where a battle is being fought all around you and time seems to freeze.

I remember the Humvee careening past and me rolling to the side of the road. I didn't think I was hurt. I remember being angry. Way more than angry. Furious. How dare these guys do this! I thought. We're here, trying to make a difference in this country.

I tried to gather myself. My first thought was, Where is my rifle? I wanted to be able to protect myself and my men, because insurgents often followed up an IED attack with small-arms fire.

I reached around, feeling for my weapon, and realized I couldn't move. All at once I knew: I was hurt, badly. My head swam. I thought about my wife, Kim, our kids, and our home back in Virginia. My last thought was, God, I don't want to die here.

When I came to, our first sergeant was kneeling over me, and a medic was wrapping tourniquets around my legs. The ground was sopping; I was lying in a pool of my own blood. Soldiers carried me to one of the remaining Humvees, and laid me inside, on my back.

I looked down and saw something odd. My left foot was folded over on my lap.

I tried to move it. Nothing happened.

"I can't feel my legs. What's wrong with my legs?"

I nodded OK, but somehow I knew otherwise. Maybe it was the fear and urgency in his voice. And maybe it was then that the question silently took root: Would I ever be fine again?

We raced back to Forward Operating Base Falcon, my head cradled in the medic's lap. He wouldn't stop talking. "Stay awake!" he kept saying. "Keep fighting! Don't you quit on me!"

I asked him to say the Soldier's Prayer.

He met my eyes, and began to recite those sacred words. "Brave warriors, should fate find us in battle...."

Suddenly I felt so tired. I just wanted to close my eyes and go to sleep. For a minute, forever, it didn't matter. But deep within me an inner voice urged, Don't quit. Don't give up...

The rest is a blur. I made it to Base Falcon, then to Baghdad on a medevac chopper. And finally back to the U.S., to Walter Reed National Military Medical Center in Washington, D.C. That's where doctors decided they had to amputate my left leg. The next day, they told me that because the bones in my right leg were completely shattered and so much tissue was damaged, they'd have to take that leg too.

All my life, I'd been a physical man. Built like a buffalo. Played linebacker at The Point. Served in three wars. Yet lying there week after week in Walter Reed, I wasn't depressed. Not then. I had so many visitors -- Kim, our children, relatives, nearly 20 years' worth of Army friends.

And then Walter Reed released me. "You're ready to go home now, Colonel."

I couldn't wait. I craned my head as the Army ambulance pulled into our driveway. "Isn't it wonderful to be back?" Kim asked, as aides helped me inside. I looked around the house. At the stairs I could no longer climb, at the tight corners where it would take effort for a wheelchair to turn.

That's when it really hit me: This is for keeps.

The stream of visitors had stopped. There was no hustle and bustle of doctors and nurses. The house was quiet, especially when the kids were in school and Kim had things to do. Everyone's lives seemed so busy, so full. Mine, not so much. Go to physical therapy, head back home, rest.

It became clear, cruelly clear, how dependent I was. Not long before, if I needed something, I hopped in my truck and got it. Now I had to ask for help doing the simplest things, like getting into the bathtub to shower.

One day, I wanted to go to my son Jaelen's youth football game. The planning that went into it -- it was like a military operation! Kim marched into the bedroom hours early. "We have to get you dressed," she said.

Getting me ready, getting me into the van, getting me to the sideline, getting me back home, was a bigger deal than the game itself. The whole production exhausted me. It humbled me.

I used to consider myself the rock of our family. That was my job in life. Now the thought crept into my mind that I was a burden, that I would never be fine again.

Every morning, I awoke and looked down to see if my legs were there, hoping for some kind of miracle. Therapists call that "magical thinking," as if we can just dream our problems away. But if this was a dream it was a nightmare.

One morning I just started crying. I'd cried some before but I was never out of control. Now I couldn't control it, couldn't stop the tears and the pure, deep emotions that poured out. Where was that inner voice that kept me from bleeding to death in Iraq, that innate will?

Now, for the first time in my life, I wanted to give up. In the midst of that storm a long-lost memory broke through, a memory of another time I just wanted to quit and walk away.

I was a senior in high school. I had one driving goal in life -- to play big-time college football, and be good enough to make it to the NFL. And I was good. Several colleges recruited me, but only one major football school.

Then, late in the process, that school backed off, saying, in effect, that I wasn't really good enough. I was devastated. My whole life plan was destroyed.

Why fight it? Why keep playing? I thought. Until a West Point recruiter visited my school. I had never given much thought to joining the military. But West Point ran a major football program.

I'm going to join up and play for them, I decided. I'm going to prove I'm good enough. And I did. My final season, I was a co-captain of the Army team.

Here I was again, my hopes and dreams seemingly shattered, half my body gone and nowhere to turn. Or was there? A prayer welled up from deep within me: Please, Lord, I know you didn't make me a quitter. Don't let me give up now.

I cried for two days, a cathartic outpouring of all the grief and despair and pain and fear that had built up inside me and exploded like that bomb under the Humvee, except this release was liberating. Your legs aren't coming back, Greg, I told myself. It's how things are now.

You can't always understand God's ways. Faith is accepting what we can't know, and that's the first step in moving forward.

After 48 hours of looking into myself, I called Kim in and asked her to sit down.

Kim didn't say anything. She didn't have to. She just put her arms around me and hugged me so tight that I felt completely whole. Still, I wasn't ready to go back on active duty.

One day that summer Mike Sullivan, an old Army football teammate, gave me a call. Mike had joined the NFL's New York Giants as an assistant to head coach Tom Coughlin after the military.

"How would you and your son like to be guests of the Giants at one of our games?" he asked. "I'll even get you sideline passes." Well, well, well. I was going to make it to the NFL after all! (Continue reading after the photo.) 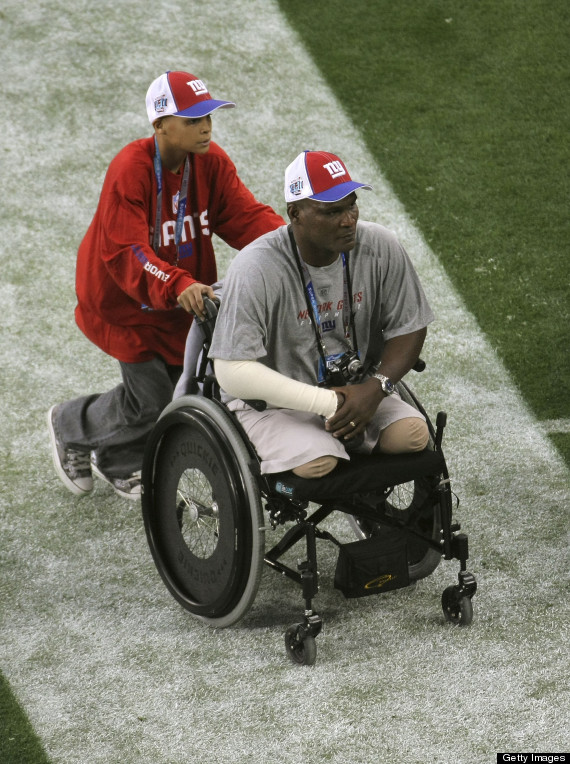 We picked a Sunday when the Giants were playing the Washington Redskins, at the Redskins' stadium, so I wouldn't have to travel far. Five days before the game Coach Coughlin called.

"Would you be willing to say a few words to the team Saturday night?" he asked. "We've really been slumping -- we might not even make the playoffs -- and I think a pep talk from you, explaining what you've been through, well, it would really mean a lot, Greg."

I said yes, but I had no idea what I would say. I was used to giving orders, not speeches.

Saturday evening, Kim drove me to the Giants' hotel. I fumbled nervously with a 3x5 card, the kind for writing crib notes. It was totally blank.

Mike brought me to a conference room, where the team had gathered. There was nothing I could tell them about the game that they didn't already know.

But I could talk about my life, about not quitting on yourself or on your faith, about not giving up when giving up seems like the only option, the things I had come to know these past number of months.

I stood up in front of them, on my new prostheses, and began to talk. To me, it wasn't particularly memorable or inspiring. The players applauded at the finish, but I felt it was mostly out of politeness.

I didn't think any more of it, even the next day, when the Giants went out and whipped the 'Skins. Even when they won their next five straight and made it to the playoffs.

But when they won the Super Bowl and Mike told me how much my talk had meant to some of the players, it really hit home: My story can help and inspire others.

I enrolled in grad school and earned a second master's degrees -- the first one was in information systems, the second in policy management. I acted in the movie "Battleship." And I returned to active duty in the Army, where I am currently the garrison commander at Fort Belvoir in Virginia.

There's no quit in this soldier. That is one of the greatest lessons war taught me, a lesson I see time and again among the thousands of our brave returning soldiers who face adversity and find the faith to grow strong in it. 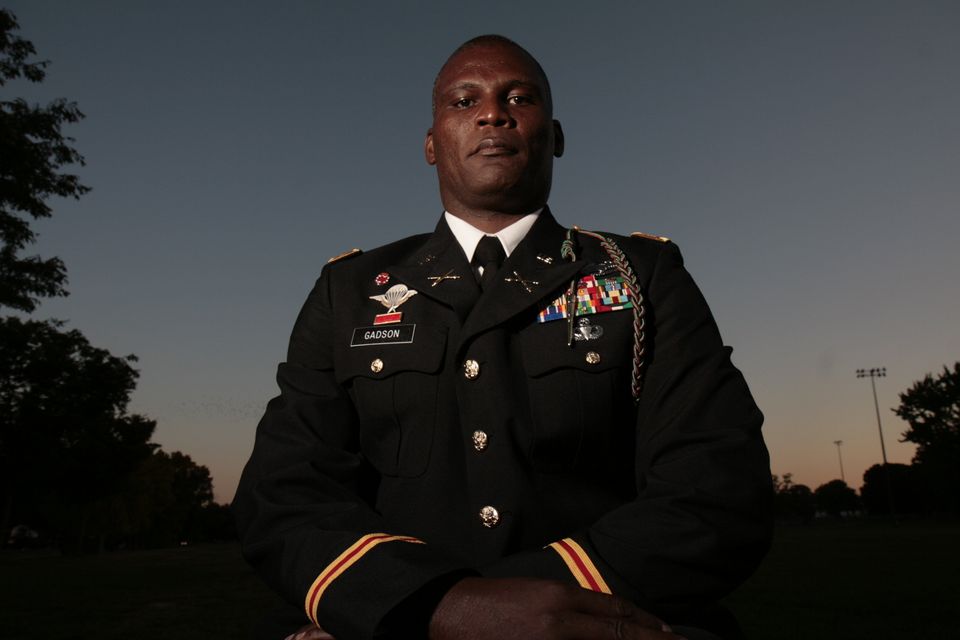