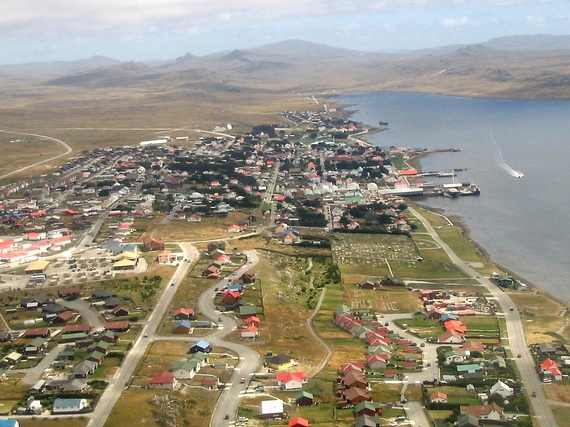 PORT STANLEY, Falkland Islands -- These islands, where the weather in summer is as bleak as it is in winter and where the only constant is the wind, aren't easy to love. It's a climate so perverse that it can rain, turn sunny, rain again, turn cold and rain all over again in the same day. Also, they're very remote -- almost 1,000 miles from Argentina, which hardly makes them any kind of offshore island, as Argentina insists.

No one much wanted the Falklands down through history. The British were there in 1765, and so were the French, but on separate islands and unbeknown to each other. The British were pushed out when Spain got possessive, but came back in 1833 and stayed. When the British Empire included swathes of Africa and much of Asia, islands here and there didn't rate a lot of concern in London. It's doubtful whether experienced officers in the colonial service even knew where they were.

Yet there were rugged British settlers who made a living for generations out of ship servicing, fishing, cattle and, big time, sheep farming from 1870 to the present. Now there are just over 2,000 Falklanders, making a robust living out of farming and tourism, mostly from cruise ships.

In 1953, Britain rejected Argentine President Juan Peron's bid to buy the Islas Malvinas (Falkland Islands). But in the 1970s, Britain wanted to hand them over to Argentina. The downsizing of the empire was well along. Only Rhodesia was a problem, where stubborn colonials held out for the right to perpetuate their rule over or alongside the indigenous inhabitants. In 1980, under newly elected Prime Minister Margaret Thatcher, Britain handed over Rhodesia to Robert Mugabe and his band of former guerillas. The Thatcher government stripped the citizenship of 240,000 white settlers, telling them they were now citizens of Zimbabwe - which is ironic, considering the high value that was placed on the ancestry of the Falklanders.

So while this fire sale of colonies was in progress in the 1970s, the Falklands, with only 2,000 British citizens and 800,000 sheep, was of no account. The handover to Argentina looked like a done deal. But, as so often in history, things fell apart largely because Argentina was consumed with internal problems, after the seizure of power by the military junta headed by Leopoldo Galtieri. Thatcher was more occupied with the sagging British economy than handing over islands far off the coast of Argentina. And while the Dirty War, in which Argentine security forces and allied thugs were responsible for the disappearance of tens of thousands of people, was raging, Argentina wasn't to be rewarded with a gift of islands on which Britons farmed.

Then, to boost his own shaky position, Galtieri whipped up a cause and invaded the Falklands on April 2, 1982. The dictator must have thought that Britain would roll over and accept the forcible seizure of the Falklands, much as it had abandoned the British settlers in Zimbabwe two years earlier.

But for Thatcher, the Iron Lady, the Falklands seizure was simple aggression. War fever gripped Britain and much of its ally, the United States. Columnist George Will wrote about the ending of diplomatic efforts by the Reagan administration: time for the diplomats to "come north and cold steel to go south."

The Falklands War did wonders for Thatcher, sweeping her Conservative Party back into power in 1983. For her, it was the seminal act of her premiership, the last roar of the Imperial Lion. In its way, it did for her what firing the air traffic controllers the previous year did for President Ronald Reagan. It showed just how tough they could be.

At the time of the war, the Falklands were a drain on the British Treasury. Now, thanks to that war, this is a tourist destination with behemoth cruise ships -- sometimes three at once -- anchored here.

But Argentina still lays claim to the islands -- a claim now as constant as the wind. -- For InsideSources