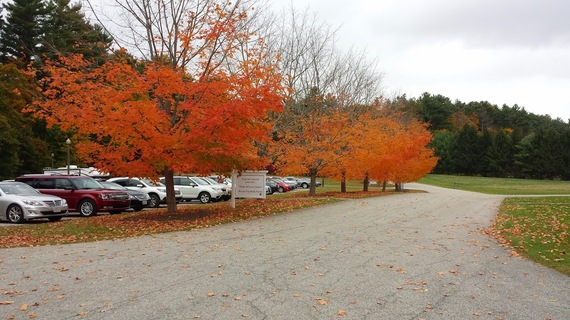 Autumn's appeal is not always readily apparent if you're still blinded by summer's glare. That's understandable. Summer is exuberant and full. Summer is heat and life and everything dazzling in bloom as the sun splashes its warm rays on our cheeks. Summer is fun and vibrant, with the sun coming out to play longer than at any point during the year. For these reasons, summer has better PR than the other seasons on which it throws considerable shade.

In the fall of 2014, I drove to meet my friend Oren Miller in the autumn of his life. It would be the last time I'd ever see him.

I, along with Sam, made the two-hour drive from my house to Lake Richmond in the Berkshires (western Massachusetts) with equal parts eagerness and anxiety. I was dying to see Oren, his wife Beth and his two kids, Liam and Madeline, while they were on vacation. But I was anxious because I might slip and inadvertently say the word "dying" to a guy diagnosed with Stage IV lung cancer just five months prior. Actually, I didn't know what to say or how to say it. And when I don't know what to say it seems I say EVERYTHING all at once, digging new holes to fill in the hole I just dug for myself and -- see? This. I do this.

If you're a dad blogger, Oren is a metaphorical giant. He took a bunch of disorganized lone wolves and created a Dad bloggers' Facebook pack. I know it sounds simple, but at the time it was unprecedented in our community. Armed only with his Golden Rule of "don't be a dick," he brought together more than 1,000 dads from all over the world and created an invaluable community of personal support and professional development -- no small feat with such large personalities.

But when I pulled into the driveway of the sleepy lake house and saw him at the door, my heart sunk. He was now a giant in reputation only, the chemo clearly having taken its toll. Even as I gently hugged his shrinking frame, I saw his gaunt face wince in an attempt to mask the pain. And yet his eyes were sharp and exacting. Measuring everything. Calculating. Still Oren.

I don't know what I was expecting upon meeting the family members of a man doctors said would be dead in a matter of months, but I was immediately struck by one jarring emotion.

Despite all the emotional upheaval the Miller family had endured, I walked into a zen-like setting. I immediately saw why Oren fell in love with Beth, who struck me as sweet and loving, but also whip-smart and fiery when need be. As they joked with and ribbed one another, I could see exactly how her sense of humor mixes perfectly with Oren's sarcastic wit.

And while Liam and Madeline were aware something was wrong with their dad, they showed no sign that anything was amiss. They immediately took Sam in the corner to play with toys while the adults sat down and chatted like old friends. Any worries I had about feeling anxious or ill at ease evaporated instantly, which is vintage Oren. He's always more concerned about everyone else before himself.

Also, that feeling of peace is amplified when this is the view from your back deck.

Although the plan was to head to the Norman Rockwell Museum, Oren looked like he was struggling, so I offered to just hang out at the house and talk. However, he was having none of that. He had promised his friends and family something, and normalcy was to be the order of the day. So off we went.

It was just a week or two past prime leaf-peeping season in New England, and many of the trees were already half-bare. The colors had shifted from blazing reds, yellows and oranges to a darker muddled brown, but there was still plenty of eye-popping color to be witnessed if you looked around a bit.

We walked around in the crisp Stockbridge air and felt the pristine eyes of Nature upon us. The kids ran ahead up paths, summoned by the universal and inescapable pull of curiosity that drives children everywhere to be the first to see what's over the next hill. Oren plodded along steadily. Always steady and sure, even when slow-going wasn't a necessity due to cancer.

At the top of the next hill, we paused. His two kids playfully argued about who would be the next to push Sam's stroller. I smiled as I looked out over the very same meadows Norman Rockwell himself used to garner inspiration for his next Saturday Evening Post cover. And then I saw Oren and Beth, lost in a moment together.

It's easy to admire someone's beauty in the full bloom of life. Oren was in the late autumn of his existence, yet somehow managed to put summer to shame. The symbolic journey from the tree of life to the ground below is no doubt sad in many ways. And for some, especially those who pass before their time, it's an endeavor fraught with denial and bitterness.

However, Oren showed it's all in how you play your cards.

The truly blessed among us realize the last leg of the journey is still part of the adventure. And like the leaves of late autumn, there is still time to be seen. To inspire. To bravely blaze a final path so bright and beautiful it will be imprinted in our minds for time eternal, forever an inspiration to those who saw it. And those who retell it.

And retell it we will. Not just because Oren is our friend, but because it's the story of a man that deserves widespread recognition.

A man who learned he had less than a year to live and immediately penned this gem, giving instructions to whichever man would ultimately marry his wife and help take care of his children. A man who continued contributing to and running the Facebook group he began to help dads, even while going through torturous chemo treatments. A man who is so esteemed in our community, we decided to name scholarships after him which will be used to send financially-challenged dads to the Dad 2.0 Summit aimed at promoting involved fatherhood.

But most notably, Oren is a man who stood up and bravely fought a battle he knew he couldn't win. And I'm not sure there's anything more courageous than that.

On Saturday, the last leaf fell for Oren. I wish him and his family peace, and I send to them all of our heartbroken gratitude and admiration. Beth, Liam and Madeline -- I'm so sad for you. But taking a page from Oren's book, I'm also so thankful you had him as a husband and father. And thank you for sharing him with us.

Our insufficient words and stories will never do Oren justice, but we will do our utmost to honor the legacy he left behind. And every autumn when the trees are on fire in their incomparably beautiful march toward winter, I'll think of Oren and his example.

I love you, my friend. And thank you. 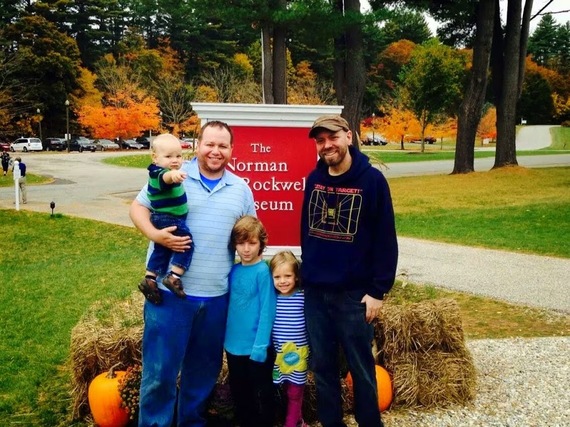 To learn more about how you can help the Miller family, click here.