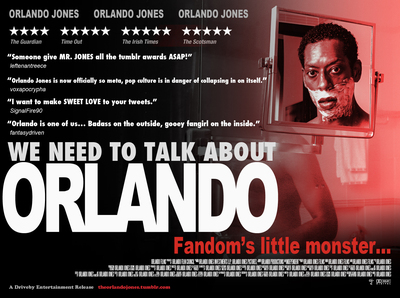 Although I'm not one of the regulars on ABC's new fantasy series Once Upon A Time In Wonderland I've nevertheless tumbled down the rabbit hole into the land of fandom for Sleepy Hollow, the show I actually am on.

It's no secret that Sleepy Hollow is one of the surprise hits of this television season, renewed for a second season after airing just three episodes. The audience response has been tremendous, demonstrated by the countless fan pages that began appearing shortly after the show's premiere.

The Sleepy Hollow Fandom immediately embraced the plots, characters and relationships, creating and sharing their own original art and stories (fan fiction, or fanfic, for short). They are legion, but the epicenter of their interaction is on Tumblr, the most exciting social platform on these streets that celebrates diversity, demands accountability (or at the very least authenticity) and promotes a level of interaction that is unlike anything I've experienced. Far more thoughtful analysis of the Tumblr phenomenon can be found elsewhere, but I can only say that it has completely transformed how I interact with fans and I ain't ever going back.

Fandom, for the uninitiated, is an audience subculture, often dismissed as the nerds/geeks who get lost in the fantasy of a book, game, televisions series or movie. I'm proud to count myself among them; submitting to the siren song of a well told story (regardless of its platform of origin) can be soothing, intoxicating, and ridiculously satisfying. There are no side-effects, no hangovers, and in most cases there's no jail time. Fandom is the thinking (wo)man's drug.

Since I've immersed myself in these subcultures throughout my life (read: comic book geek), it's only natural that I feel right at home interacting with Sleepyheads, the fans of Sleepy Hollow. Most of them are a savvy, sophisticated bunch with an uncommonly quick and cutting wit. Sleepyheads don't mince words. They're inquisitive and outspoken. They know their stuff. They know my stuff (and will call me out on things when necessary). And they never miss a beat.

Fandom provides its own useful jargon, from which I borrow freely. One term I like is shipping -- short for relationshipping. Yes, I'm geeking out on you, but you're more familiar with shipping than you realize. Think of the super-couple name smoosh Brangelina or the now defunct TomKat. Sleepy Hollow shipping created Ichabbie, the yearned-for coupling of our main characters Ichabod Crane and Detective Abbie Mills. The flames of shipping are fanned by UST (unresolved sexual tension) real or perceived. Like the tension between Abbie and Ichabod Crane aka Ichabbie. Crane is actually married to the witch and current inhabitant of purgatory Katrina Crane but that's a whole different conversation that I will save for another post. A lot has been written about the amazing Nicole Beharie's portrayal of Lt. Abbie Mills, a woman of color who (like Scandal's Olivia Pope) transcends the stereotypes of female and minority representation and adds depth and nuance to her interaction with the equally amazing Tom Mison, who plays Ichabod. Regardless of how the relationship with these characters evolves, Ichabbie is canon.

Some Sleepyheads even ship Ichabod with my character, Frank Irving (mostly because I am a troll and have encouraged it), thus spawning Ichaving, or as I like to call it, Craving.

Mr. Jones, Tear Down This Wall

You'll find no shortage of me on the interwebs -- I'm on Twitter, Tumblr, Instagram and all points in between (what happens on Snap Chat stays on Snap Chat). I create and share GIFs and memes like a veritable boss. I comment, respond and interact with the Fandom in any way possible, including live blogging and answering questions on a marathon-length Reddit AMA. I live tweet during East Coast and West Coast airings of the show. I do these things for my own enjoyment -- and hopefully, yours. But even if I wasn't part of the Sleepy Hollow cast, I'd still be part of the Fandom. They've welcomed me in, and I'm grateful for their hospitality, humor and support (even those skeptics who are waiting for "the other shoe to drop")

Some say all this fan interaction could be construed as breaking the fourth wall -- the invisible boundary between artist and audience. I think it's fair to say that any wall separating me and the Fandom is forever broken, à la Berlin circa 1989. I strongly believe in acknowledging and interacting with the audience, eliminating barriers of all kinds, and making real connections with people whenever possible. If that's wrong, I sure as hell don't want to be right. I didn't choose the fangirl life; it chose me.

I invite all Sleepy Hollow fans -- both casual and obsessed -- to keep watching. Trust me when I tell you we've only just begun.