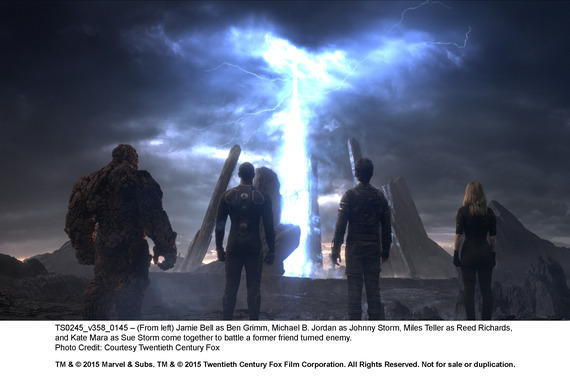 As Saint Jerome noted so wisely, "Early impressions are hard to eradicate from the mind. When once wool has been dyed purple, who can restore it to its previous whiteness?"

Accordingly, anyone who's been bombarded with the TV ads for Josh Trank's Fantastic Four shouldn't be chastised for sprinting away from any multiplex screening this latest Marvel concoction. Those trailers showcase a film lacking in verbal and visual wit, actors seemingly bereft of sparkle, and disfigured creatures that wouldn't appear out of place in a Toho production of the 1950s (e.g. Half Human in 1958; Rodan in 1957). While none of those early impressions are that wide off the mark, the first 45 minutes or so of this effort, nonetheless, are promising.

Before we go down that path, let's just note for those familiar with Trank's debut feature, the pretty terrific Chronicle (2012), Fantastic Four will seem like a bloated, less imaginative revamp in comparison. In the well-reviewed earlier effort, Andrew (Dane DeHaan), a genius, virginal nerd with with few friends and an alcoholic, abusive dad, hooks up with his cousin (Alex Russell) and another lad (Michael B. Jordan) one night during a school party. Immediately, the trio comes across an underground spaceship that transfers to them the power to move matter, fly and pull the teeth out of school bullies. There is a downside though: constant nosebleeds and the possibility of psychosis. One pal even succumbs to a sort of megalomania and proves to be a menace to mankind. Oh, no!

Both piquant and poignant, Chronicle expertly captures the pangs and joys of adolescence with a rationed dose of special effects that complement but never overwhelm the characters (e.g. a handful of Pringles chips flies out of its container and into one of the leads' widely open mouth).

Following a similar trajectory, Fantastic Four has five characters who gain superpowers that deform as much as enhance them. One, Victor von Doom (Toby Kebbell), eventually becomes psychotic with a God-complex and threatens mankind. Can the mismatched quaddruplets save us all from being sucked into the lethal chaos Doom has created? They do, of course, because they thought there was going to be a sequel, but that's not happening with last weekend's box office.

(Which reminds me you should stream the documentary Freakonomics for its hilarious segment on the "transformative" power of names on a child's future. If Victor's moniker had been von Bliss would he have been such a depressive?) 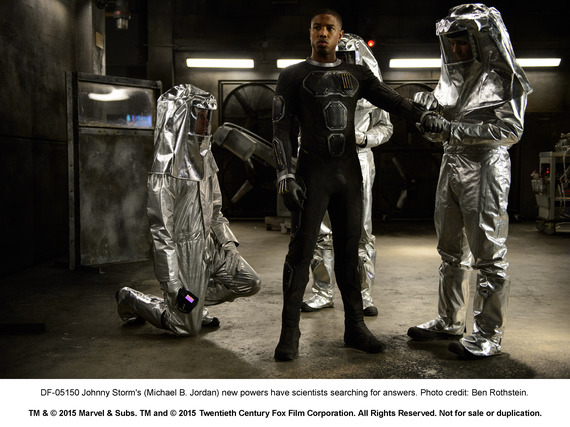 Based upon the venerated Marvel comic that debuted in 1961, whether this take is faithful or not I can't say, having spent my formative years reading Hermann Hesse and The Hardy Boys. But the film's opening setup, it must be stated, does capture the wonder of pre-teens who don't fit in and who consequently turn to the wonders of science with unfettered imaginations in their parents' garages. Yes, our main hero, 12-year-old Reed Richards, with his pal Ben, is in the midst of creating a "cymatic matter shuttle" that will transfer solid objects to another location and then bring them back.

Skip ahead eight years, Reed (Miles Teller) has made advances on his "cymatic matter shuttle," which now pretty much works. At a science fair, his device attracts the attention of Dr. Franklin Storm, Dean of the Baxter Institute, a New-York-City-based "school and think tank dedicated to incubating the best new ideas from high school and college students." Of course, a capitalistic baddie controls the institution. Think Trump Jr.

Once at Baxter's on a scholarship, Reed immediately falls for Storm's brainy adopted daughter Sue (Kate Mara), befriends Franklin's bright but rebellious son Johnny (Michael B. Jordan), and begins an uneasy relationship with Victor, a former boy genius, who also has the hots for Sue.

All the characterizations here are believable, and although the buildup is slow, it's not off-putting. But then come the special effects and the film falls apart. Where is the spirit of H.R. Giger when you need it? Ben (Jamie Bell) turns into a creature with boulders for flesh and looks as if he's walking about in a rubber jumpsuit. Johnny, who is constantly aflame, has a weird facial construction when roasting. While von Doom, who is supposed to scare the bejesus out of us, looks as if he's wearing a cheap Halloween costume he got at Walmart a day after Halloween. Worse than the heroes is a lack of an exciting finale. The film is all foreplay without an orgasm. Without a solid payoff in a humorless flick like this one, there's no reason for its creation. Visual effects supervisor Kevin Mack must have still been slaphappy from his work on Fight Club. 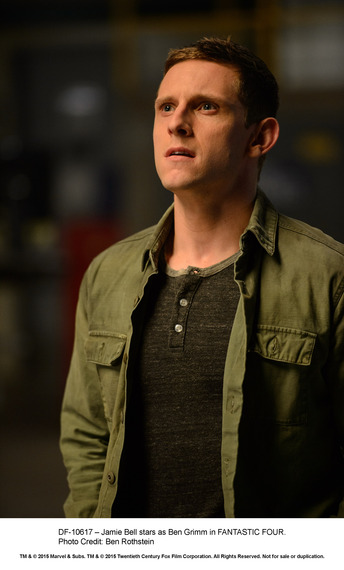 As for the screenplay with its enfeebled dramatic arc by Jeremy Slater (The Lazarus Effect), Simon Kinberg (Mr. & Mrs. Smith), and Trank, its mild critique of corporate greed and the military's unsympathetic abuse of our "heroes" is acutely bland and old hat, an adolescent's notion of the enemy.