One of the things I like best about Hana is that there is nothing to do. This is intentional on my part. It's a small town on the far eastern end of Maui, with one general store and not much else. But for us city folk who are wedded to our iPhones and iPads and computers and all the connectivity in the world, it's like undergoing a much-needed electronic detox, and it's wonderful.

I first learned about Hana some 20 years ago when I was living in Los Angeles and looking for a respite from a high pressure job I'd just finished. I asked around and, lo and behold, it turns out that a lot of people I knew pointed to one place and one place in particular: Hana.

So I took their advice and booked myself into what was then the only game in town, the Hotel Hana Maui. Since then it's undergone several different owners and one name change, but it remains pretty much the same now as it was then, a touch of paradise in the Hawaiian Islands. 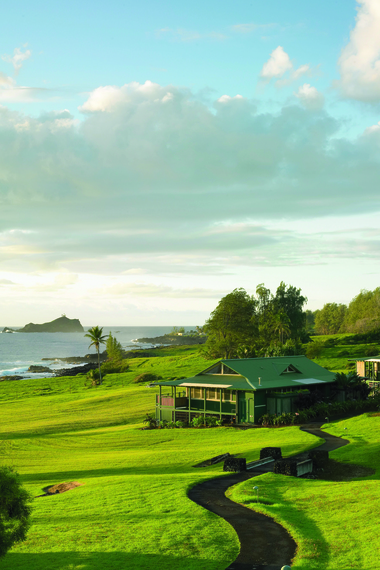 I knew that I was in the right place when I woke up one morning in one of the lovely corrugated-roof Sea Ranch Cottages, took my cup of steaming fresh coffee out onto the deck and saw a whale breaching out in the ocean. It was mesmerizing, and on every trip back I've looked for the same thing, alas, to no avail. But the coffee and the early morning stillness is still magical, an experience of total bliss.

Hana used to be a sugar plantation town, but in 1946, with the sugar industry dying out, Paul Fagan, a San Francisco entrepreneur, bought up a lot of the land. He also built a small resort hotel, not for profit, but it seems just for fun. Eventually, a lot of people, including celebrities, found out about it and found their way to Hana.

Back then, there were really just two ways of getting to Hana, by boat (unlikely) or by the twisty, 52-mile Highway to Hana, the infamous road from the Kahului airport.

You can still take the drive, which is breathtaking despite the hairpin (and hair-raising) turns. You can also fly from Kahului to a small airstrip in Hana on a nine-seat Cessna from either Kapalua or Kahului, with service expected soon from Honolulu.
.
Today the hotel is known as the Travaasa Hana Resort to reflect the new ownership, but it remains the same in many ways. There have been upgrades, but the essential character of the place--as a quiet hideaway with no Wi-Fi (so far) or televisions in the rooms (you have to go to the main building for that)--still holds.

Of course, you can do a lot of things when you are in Hana if you choose to. There is Hasegawa, the 104-year-old general store right next to the Travaasa, which is a destination in itself. There are some lovely sights, like the Seven Sacred Pools with a 400-foot waterfall. And if you are really adventurous you can drive around the other side of the island where parts of the road remain unpaved and disconcertingly narrow.

Then there is Haleakala, the longtime dormant volcano that dominates the island. A lot of people like to be there at sunrise, a spectacular sight, often spending the night sleeping in the vast crater or driving up in the pre-dawn darkness.

Me? I've done all that, and now, whenever I go back to Hana, which is often, I just like to power down and do nothing in particular and do it very slowly. I am still looking for another whale to breach far out in the ocean. That's enough excitement for me.

More:
travelmauiWhales
Newsletter Sign Up
An essential daily guide to achieving the good life
Subscribe to our lifestyle email.
Successfully Subscribed!
Realness delivered to your inbox