Josh Ostrovsky, also known as "The Fat Jew," first garnered mass attention when he taught a spinning class to homeless people using stationary CitiBikes. Since then he has gone on to create a career by doing outrageous shit and then putting it on the Internet. The social media sensation was at SXSW on Saturday and gave a presentation at a brunch hosted by NewsCred -- or as he like to refer to it "my version of a TED talk" -- about some of the craziest stunts he has pulled over the past couple of months, all the while getting a rosé pedicure.

We caught up with The Fat Jew after his monologue and asked for his take on men's fashion, his favorite Kardashian and how he likes sharing the spotlight with his adorable dog, Toast. Here's what we learned:

HuffPost: Why did you decide to come to SXSW?

HP: You have a very distinct style that you've become known for. What do you think your clothes say about you?

TFJ: My look right now is giant adult baby sumo wrestler. Giant adult baby is a great look right now -- I’m essentially Benjamin Button. I was super mature as an 11-year-old and now I’m basically like an 11-year-old, so I’m aging in reverse. Giant baby is a look I’m trying to get trending right now and I think it says that I’m a giant fucking infant and kind of loving it -- with a driver’s license and a platinum card. 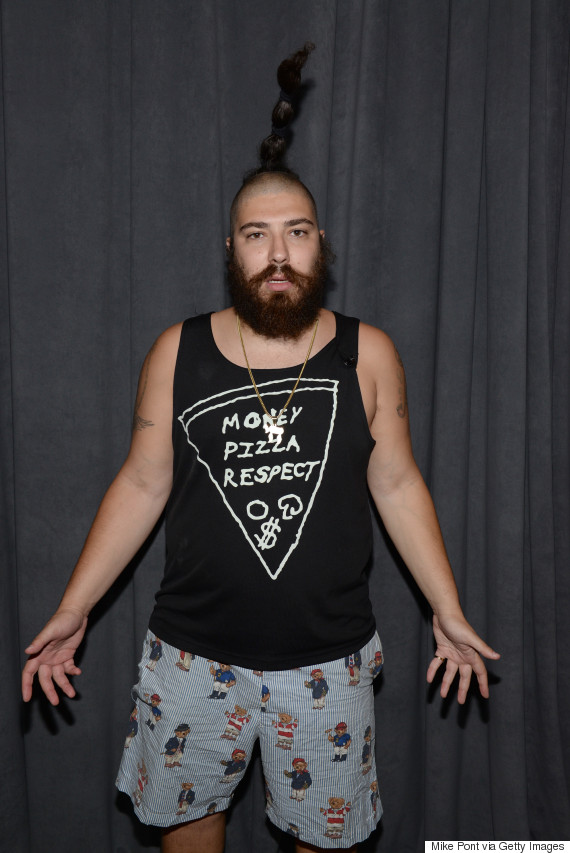 HP: How do you get your hair to stand up on top of your head like that?

HP: You seem to have really strong opinions about fashion and style, so what do you think is one clothing item every man should own?

TFJ: I wish more guys were wearing sleeveless turtlenecks. How come we never see that? ...You know, I wouldn’t say what would I want in menswear, because there are so many things I want out.

TFJ: Where do I even start? Men are the worst dressers. First of all, don’t wear that Israeli-Palestinian scarf. You know, the one that people wear around their necks. Don’t wear that. And so many hats. LA should be renamed the place with the most dumb hats. Also, a white v-neck under blazer? Just stop. It was killer in like ’05 if you were working the list at a door and you were like “Hey, we're not letting anymore guys in right now.” That was a killer look for you... or if you were Brody Jenner. But in 2015? No. And if your plan is to wait on it so long that it actually comes back? Don't do that. I know you think if you keep rocking it, eventually you’ll be at the cutting edge because it all comes back around, but just stop doing it right now. Bootcut jeans are a go. I’m embracing them ironically.

HP: Speaking of the Kardashian-Jenner clan, which Kardashian is your favorite and why?

TFJ: My favorite used to be Kourtney because she’s sort of like a rich gnome with a nose job, which I’m super into. It’s like one of the things I'm looking for. Now, obviously it’s Khloe because she’s just so great. I love a broad-shouldered women. I want a woman who can carry me in a BABYBJÖRN, you know? She’s also super funny.

HP: Recently your dog Toast has started to take over the Internet -- how do you feel about sharing the spotlight with a dog?

TFJ: I think it’s hilarious. She’s mad fucking cute. I honestly think that I'm ridiculously awesome but I'm not for everyone. I get it, you're not into me. I totally fucking feel you, but there is no reason anyone should not be into a cute ass dog with no teeth wearing cool sunglasses. Like, are you a monster? You don't like me, I think you're making the wrong decision, but I get it. You don't like her? You’re basically slapping George Washington in the face -- you’re un-American. 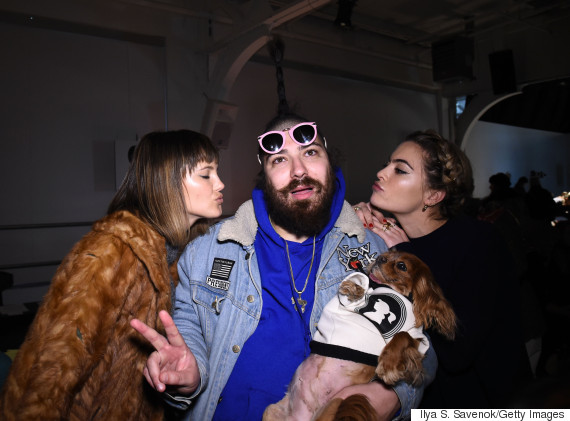 HP: You have a really strong social media presence and people feel like they know you, but what is one thing people might be surprised to learn about you?

TFJ: Every other weekend I teach at a youth center. I teach the pottery wheel to inner city kids.

TFJ: No. I definitely do not know the pottery wheel. I wish that was true. I want that to be true so, so, so badly. The thing people are the most surprised to learn about me… I think people are surprised when they come to my house. They're like, it’s going to be crazy. It’s either going to be like the loft from the movie “Big” or it’s going to be a hobble filled with garbage and stuffed animals. But my house is super tasteful. Crown moldings, sun-splashed, really amazing feng shui. You come and you're like, there is no way that you fucking live here. People are like, whose apartment is this? LOL.

HP: And my last question, probably the most important one: tacos or pizza?

TFJ: Pizza for life because I’m from New York. I feel like turnt up LA youth are like tacos, and I’m like, nothing but love. I would date a taco, I would marry a taco, I’d make tiny taco children, I’d have unprotected sex with a taco, but New York through and through. I have [shows tattoos] I don’t know how many at this point: money, pizza respect [points to his tattoo]. This one on the arm, the double pizza Jewish star. I have three fucking pizza tattoos, if I said tacos… maybe it’s tacos.