There are many opinions about who first said: "It's hard to make predictions--especially about the future." As far as I can tell, it may have been the Danish writer Robert Storm Petersen (and not Yogi Berra). In any case, predictions are indeed notoriously difficult to make, even when they concern the near future. Yet, it is instructive to examine what our current best guess is, as to the universe's very far future (based on existing observations and cosmological theories).

First, there is essentially no doubt that in about 5 billion years our Sun will die, swelling up a few hundred fold, and in the process, extinguishing all life on Earth. Probably even before that, about 4 billion years from now, our Milky Way galaxy will collide and merge with the Andromeda galaxy. The solar system will most probably be thrust away from its current location (even though individual stars will not collide), and find itself at a new spot in a coalesced elliptical galaxy. Other groups of galaxies that are gravitationally bound will also merge to form single giant galaxies.

What about the universe at large? The evidence points to a cosmic expansion that will be perpetually accelerating. While they are not entirely conclusive, observations suggest that the dark energy that is currently propelling the expansion of the universe to speed up will continue to do so. If, as existing observations indicate, dark energy is indeed the energy associated with the physical vacuum, then neither the stars nor the giant galaxies themselves will expand. However, the space between those galaxies will increasingly stretch.

Cosmic repulsion will overwhelm the ever-weakening strength of gravitational attraction, and will disperse the galaxies until none will be left within view of each other. In addition, all the galaxies will become intrinsically dimmer and dimmer, as they will run out of hydrogen gas--the fuel for forming new bright stars. As the population of stars ages, it will consist either of the dead corpses of previous generations--dim objects such as white dwarfs or neutron stars and black holes--or of slowly evolving, faint, low-mass stars. For an observer (if one would exist) in a given galaxy, the sky would grow increasingly darker. In fact, observations with the Hubble Space Telescope and with ground-based telescopes tell us that the universe is already declining in terms of its global rate of forming new stars (Figure 1). Even black holes, those extremely compact objects, some formed through the collapse of very massive stars, others via the accretion of matter at the centers of galaxies, will not enjoy eternal life. Through a quantum process known as Hawking radiation, black holes are expected to lose energy and evaporate. This will not happen any time soon. A black hole formed via the collapse of a massive star may live for some 10 years before evaporating. But remember, if there is one thing that an ever-accelerating universe has in abundance, it is time. 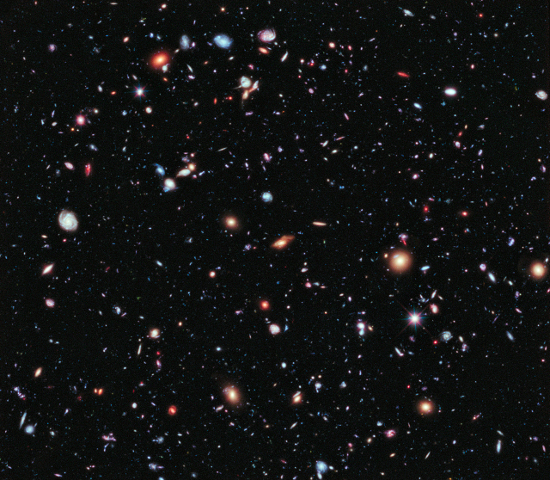 Figure 1. Hubble eXtreme Deep Field (XDF). Using deep images of the universe, astronomers have been able to determine the history of the cosmic, global star-formation rate, from an age of about 500 million years to the present (13.7 billion years). The James Webb Space Telescope will enable a determination of the birth rate of new stars at even earlier times. Credit: NASA and ESA.

Although the seventh film in the James Bond series was called Diamonds are Forever, strictly speaking, this title is incorrect. According to present particle physics theories, protons, and therefore atoms, should decay. This again is not an imminent danger. Experiments put the lifetime of protons at longer than some 10 years, but in an accelerating universe decay would eventually happen.

So it appears that our universe will end its life, after all, not with a bang but a whimper. Following black hole evaporation and proton decay, all that would be left is radiation, and pairs of electrons and positrons (the latter would eventually annihilate into radiation, too). For those searching for a "point" or a "purpose" for the universe's existence, this may sound disappointing, but it shouldn't. There is no reason for the universe itself to suggest a purpose for its existence to us. Just as humans and stars die, so can the universe. Everyone should search for a purpose in her or his own life. And by the way, in my opinion, attempting to understand the workings of the cosmos and predicting its future is a pretty worthy purpose.