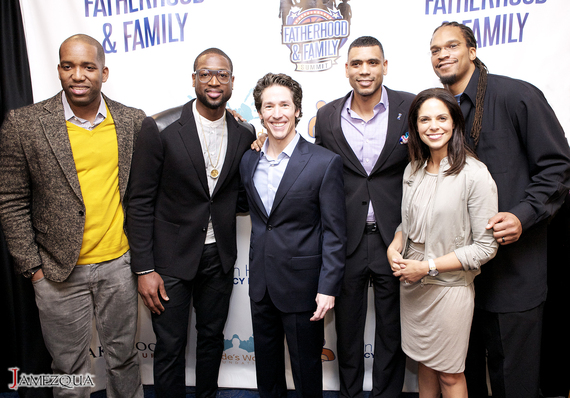 Since the release of my book, Fatherhood Rising To The Ultimate Challenge, and my CD, Fatherhood Words Of Passion, I have traveled the country to encourage young people that they can be anything they want to be in life, no matter what their circumstances.

It always amazes me how much hearing that message from an athlete or rapper or actor who they recognize resonates with them. It's the reason why I started a fatherhood movement and connected with a wide a range of men to give personal accounts about responsibility, triumphs, struggles and what it takes for young people to succeed.

This fatherhood movement has been rapidly growing. What's reaffirming to me is that the young men who we encounter want to do something with their lives -- they want to make the right decisions, they want to have an impact on the world. They just are looking for guidance.

That fact is sometimes lost on many who still see young people as the scourge of society. Coming up I have two amazing fatherhood panels. One in Baltimore at a church named New Psalmist Church that will feature Baltimore Ravens Torrey Smith, Aaron Mellette, Josh Bynes, Kapron Lewis-Moore, Justin Forsett and former Washington Wizard Juan Dixon. 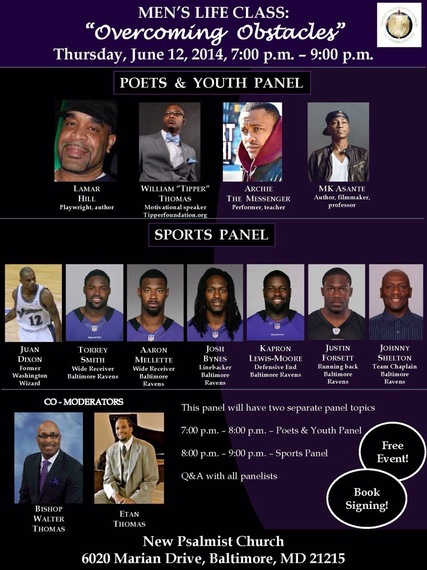 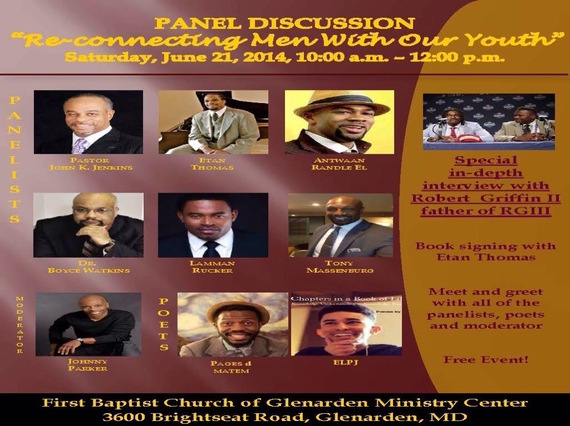 I am always encouraged by the number of young people who are craving the answers to life's challenges.

Indeed, an unfortunate reality is that these types of events are usually not covered by the mainstream media that typically seem to be determined to focus on the negative things that athletes do, not the life-affirming things many of us engage in daily. It's not something plastered on the front of the morning newspapers. But had any of these athletes done something negative, that sure would have been a top story. We have to hold the media accountable to show a balance of positive stories because young people are watching.

Many of the young people who will attend both of these panels will be the single-family households. Each panelist will discuss fatherhood from a different perspective but we all want the young people to know that while there are many negative statistics about the outcomes for families headed by a single parent, that should not stop any one of them from reaching their potential.

That will be our overall message: To reach for the stars no matter what your situation. Will there be obstacles? Yes. Will it be easy? Absolutely not. But there are too many examples of men who were able to be successful and make the right decisions who came from so-called "broken homes."

Yes, the statistics are alarming.

According to the U.S. Census Bureau, in November 2009, there are approximately 13.7 million single parents in the United States today, and those parents are responsible for raising 21.8 million children (approximately 26 percent).

Although growing up in a single-parent household may not be the most favorable situation, it is reality for about a quarter of all kids in America today. Why shower them with negative statistics and lower their expectations and possibilities in life?

No one can deny that the statistics are alarming:

*63 percent of youth suicides are from fatherless homes (U.S. Dept. Of Health/Census) -- five times the average.

*90 percent of all homeless and runaway children are from fatherless homes -- 32 times the average.

*85 percent of all children who show behavior disorders come from fatherless homes -- 20 times the average. (Center for Disease Control)

*75 percent of all adolescent patients in chemical abuse centers come from fatherless homes -- 10 times the average. (Rainbows for All God's Children)

*85 percent of all youths in prison come from fatherless homes -- 20 times the average. (Fulton Co. Dept. of Correction)

However, young people need to be encouraged that they do not have to fall into those statistics. That they can avoid the obstacles and pitfalls and traps that society has carefully laid out for them. That's the message we try to instill at these panel discussions. That you have to learn how to become successful in a system that is designed for you to fail. 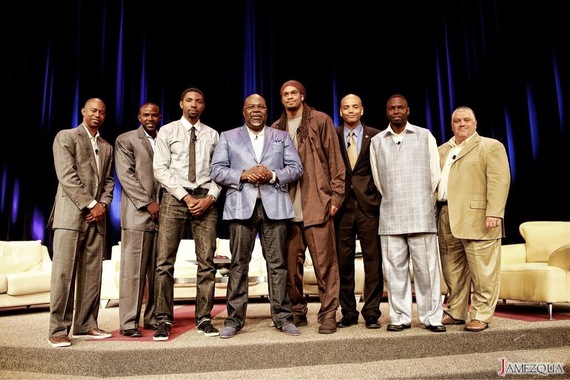 There are too many examples of men who were able to be successful and make the right decisions who came from so-called "broken homes." Most notably, President Barack Obama. That's not to say that he didn't still feel the pain and anger of not having his father there.

President Obama described in Dreams of My Father his impression when he met his wife's family for the first time as "the vision of domestic bliss." He continued to say:

"Upon seeing the joy of the Robinson house, for someone like me who had barely known his father, who had spent much of his life traveling from place to place, his bloodline scattered to the forewinds, the home that Fraizer and Marian Robinson had built for themselves stirred a longing for stability, a sense of place that I had not realized was there."

It is seen by his words how deep the feeling for a father can remain in the heart of someone years after they have reached adulthood. It can affect their lives and their future. President Obama is also the perfect example of someone who has been able to be successful despite that missing connection in their lives. It is possible. We have to be very careful of discouraging young people before they even begin on their journey.

On the eve of Father's Day Weekend in 2009 at a White House Town Hall, the president made these powerful and inspirational statements:

"I say this as someone who grew up without a father in my life. I had a heroic mom and wonderful grandparents who helped raise me and my sister, and it is because of them that I am able to stand here today. But despite all their extraordinary love and attention, that didn't mean that I didn't feel my father's absence. That's something that leaves a hole in a child's heart...

Some of the young men who are here today might have their own concerns one day about being a dad. Some of you may be worried that if you didn't have a father, that you may not know how to be one when your turn comes. Some of you might even use that as an excuse to say well, if my dad wasn't around, why should I be. Let's be clear, because your own father wasn't there for you is no excuse for you to be absent also. It's all the more reason to be present. There is no rule that says you have to repeat your father's mistakes. Just the opposite. You have an obligation to break the cycle and to learn from those mistakes. To rise up where your own fathers fell short and to do better with your own children. That's what I try to do in my life. When my daughters were born I made a pledge to them and myself that I would do everything I could to give them the things I didn't have. And I decided that if I could be one thing in life, it would be to be a good father. I haven't always known exactly how to do that. I've made my share of mistakes. I had to ask a lot of questions. But I have also learned from men that I admire." 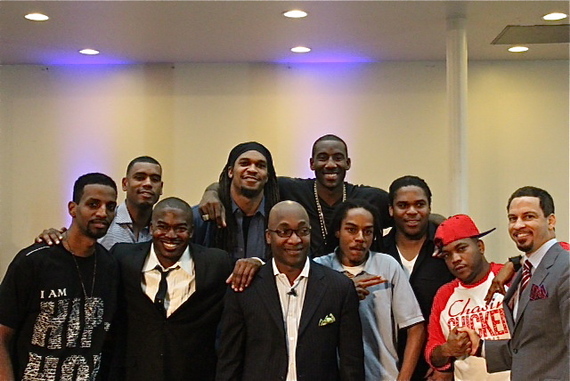 That's why panels like these are so important. Young people need to hear words of encouragement similar to this from the people who have their attention. I applaud the voice of motivation that each of these men will be providing for everyone who hears their voice, their story, what they had to overcome to make it to where they are. How they didn't allow anyone or anything to stop them. I am honored to partner with these different men who are willing to use their voice, celebrity, and passion to have a positive impact. Not because any of us believe we are some fatherhood experts who have all the answers.

My goal with this book is to use the stories of these men from Tony Dungy to Dr. Cornell West from Ice Cube to Talib Kweli, Roland Martin and John King from CNN, Arn Tellem, Mumia Abul Jamal, Ed Gordon, Chris Paul, Allan Houston,Will Downing, Coach John Thompson, Grant Hill, Derek Fisher and Billy Hunter to Derrick Coleman, Pastor John K Jenkins,, David Aldridge and Stuart Scott, Dave Zirin and John Carlos to Tito Puente Jr. to Damian Marley to Yao Ming from Kevin Durant to Michael Moore, Congressman Elijah Cummings and Howard Dean to Chuck D, Kareem Abdul Jabbar to Taye Diggs to Tony Hawk , Andre Agassi, and Al Sharpton, Kevin Powell, Lamman Rucker, Styles P, Russ Parr, and Isaiah Washington. Al Horford, Joe Johnson, Baron Davis, Joakim Noah, and Malcolm Jamal Warner to inspire them to believe that they can make it and be successful in life. To show them the beauty of fatherhood, not from a shaking my finger at them standpoint. They get enough of that from adults. But from the sharing of other's experiences. None of us are fatherhood experts, I don't even think there is any such thing, but we can all learn from each other. 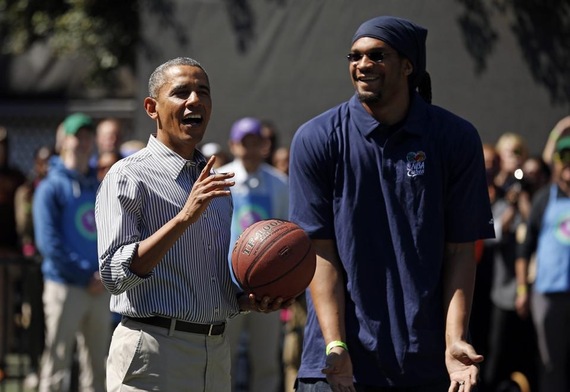 So, as an appointee to President Obama's Fatherhood Initiative, I am going to continue this Fatherhood Movement and continue to present panels and town hall discussions in different cities across the nation. All in an effort to inspire an entire generation to believe in themselves no matter what negativity, statistics, or discouragement they are being bombarded with. This is the book and CD and movement that I wish I and so many young men and women who came from single-parent households had access to when we were growing up. The stories of these men and most notably that of President Obama, would have encouraged a lot of people that I grew up with. My overall goal is to inspire an entire generation.

Here are links to two of the panels one with Joel Osteen at Lakewood Church in Houston, Texas. The other with Bishop TD Jakes at The Potter's House in Dallas, Texas.