My body is crisscrossed with more scars than Frankenstein's monster. This is all thanks to an unfortunate combination of clumsiness, a desire for physical adventure, and poor hand-eye coordination. My scars tell stories of childhood folly (trying to make a treehouse out of cinderblocks), poor judgment (slicing a watermelon while it sat on my lap), and horrible luck (why would someone leave an open package of thumbtacks on that park bench?).

My hope is that these stories will someday make the leap from "bar anecdotes" to "teachable moments for my children."

I used to have a small mole at the tip of my chin, about the size of a pencil eraser. When I was in fifth grade, a group of boys at camp called me "Mole-Chin Nerd" for the entire summer, and my self-image was obliterated by a tiny birthmark I'd never really noticed before.

Over the course of my senior year in high school, it doubled in size. My dad took me to a dermatologist, who recommended removing it before it "got worse," which I interpreted as "sprouting hair." Chop away, doctor.

Two weeks later, I was off to college with an angry red mark on my face, almost five times the size of the mole. Resembling a Hostel victim, I lamented my unimproved visage, while more people asked about my scar than had ever noticed the birthmark. I just told everyone I cut myself shaving.

A questionable mole should always be dealt with, but let's face it: my teenage brain was more concerned with vanity than any future health issues. Luckily, my dad soothed me with the magic words: "I hear scars don't sprout hair."

When I was a junior in college, I studied abroad in Australia. Once there, I partook in all sorts of daring activities: sharing a beer with a girl who had mono; swimming in a lake that turned out to be inhabited by crocodiles; spelunking in a cave without a rope. Most of these adventures worked out OK. Except for the spelunking thing; I lost my grip and plummeted to the bottom of a cave.

Mistake #2: Not seeing a doctor right away. I was pretty banged up, but that Wednesday night there was a huge formal dance at my college, and this really cute rugby player I was seeing would be there...

Mistake #3: Still not going to a doctor when my chest pain worsened, and spread to my neck and shoulders. I planned to go the day after the party -- I did not want to miss it.

My friend found me passed out in the shower and called an ambulance. Turns out I had ruptured my stomach in the spelunking fall, and the chest and shoulder pain I felt was me slowly suffocating on the air from my stomach.

The ridiculous part is how I almost died because I wanted to impress some stupid guy. Who played friggin' rugby. And never even visited me in the hospital. My mom, on the other hand, immediately hopped on a plane and traveled across the world to be with me.

I should have learned: don't fall for douchebags. But really, my takeaway was: always go spelunking with a rope. 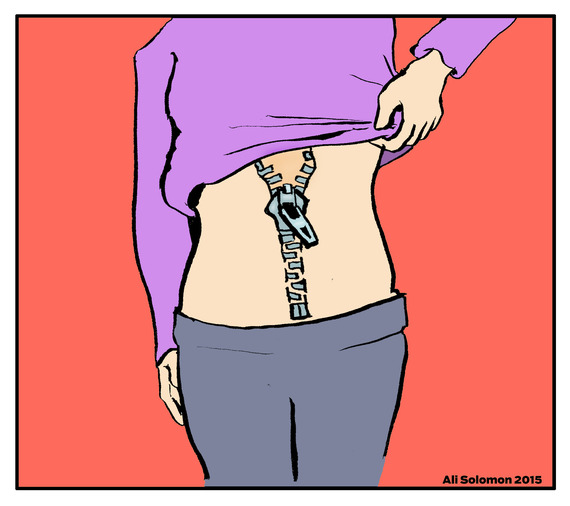 Approximately seven weeks into my first pregnancy, I learned I had a fibroid the size of a grapefruit near my cervix. While the name "fibroid" sounds like a circa-1981 Atari game, they are in fact benign tumors that can cause pregnancy complications. For me, it meant that I could never give birth naturally.

The secret of my scar is that I'm not bummed at all about my C-section.

I was relieved to find out I wouldn't have contractions, wouldn't have to "focus on my breathing" or sit in an ice bath for weeks afterward. I could lie passively while the doctor removed the baby like a magician procuring a rabbit from his hat. The awful recovery and six-inch smiley face scar below my belly seemed a small price to pay for this amazing baby (who would, two years later, ask me why my stomach was "smiling").

But if anyone asks, I would have loved to have given birth naturally.

My scars have bisected my abdomen, rendered my belly button irrelevant, and made my lower face concave, but they're mine. They're reminders of my recklessness and resilience, and they've enabled me to become a parent (one who would totally fly to Australia in a millisecond if my daughter needed me).

Plus, they provide great bedtime stories for my children, who, from the looks of it, have started their own scar collections early. Sigh.