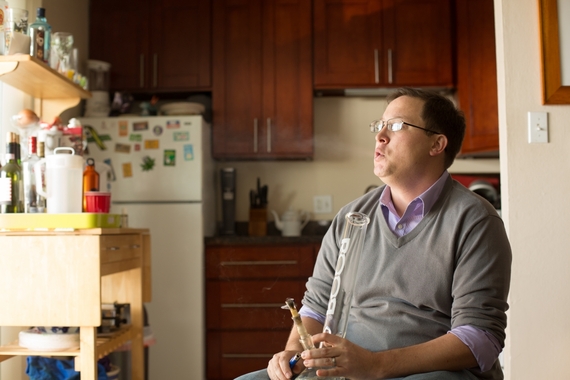 Last week, the Internet erupted in praise, skepticism, and played-out puns following reports that the FBI was reconsidering its hiring restrictions on marijuana use. FBI Director James B. Comey said Monday that the agency was "grappling with the question right now" as the country changed its approach to marijuana, but backpedaled two days later, declaring at a Senate hearing, "I am absolutely dead set against using marijuana... I did not say I'm going to change that ban." It's a shame -- to stay as effective as possible, the FBI would do well to become more flexible on prospective employees' marijuana use.

The supposed potential change was a reaction to the agency's troubles recruiting hackers to fight cybercrime amid growing threats from China and elsewhere. Comey, playing up stereotypes while stating a valid concern, went so far to say, "I have to hire a great work force to compete with those cyber criminals and some of those kids want to smoke weed on the way to the interview." Meanwhile, the FBI's policies state that job applicants can't have used marijuana within the past three years, any other illegal drug in the past 10, or ever sold or transported any illegal drug.

It is certainly true that many talented young hackers use marijuana. 14 percent of 18-29 year olds told the latest Gallup poll they were current marijuana users, and 36 percent reported trying it at some point in their lives -- and hackers are one of many subcultures well-known for their cannabis use. The cream of the crop is even more susceptible to disqualification: a number of studies have found smart people are more likely to experiment with drugs than their less-intelligent peers.

But a policy change wouldn't just affect young hackers who use marijuana recreationally. The FBI employs over 35,000 people, from hackers to secretaries to spies to janitors. When a young hacker who enjoys marijuana is turned away from an FBI job for her past-time, she can probably find a better-paying, drug-test-free job at Google, Microsoft, or one of the countless startups hoping to be listed along with those giants one day. But a medical marijuana patient in one of the 21 states (and the nation's capital) where it's legal may not have as many options, and current FBI employees who could benefit from its use may turn to more risky treatment alternatives in order to keep their jobs.

A majority of Americans live in states where it's legal to use marijuana for medical purposes, and millions of adults who live in (or vacation to) Colorado can already use it like they do alcohol or tobacco. Yet the federal government's unwillingness to update its approach to marijuana precludes countless otherwise law-abiding citizens from serving our country in agencies like the FBI or CIA. This already-nonsensical policy is all the more ridiculous when you consider our last three presidents -- each the ultimate head of the FBI -- has admitted to past illegal drug use. If having used cocaine doesn't disqualify one from being Commander in Chief, why should it take you out of the running to be an entry-level security analyst?

The FBI could greatly expand its applicant pool, thus increasing the quality of its hires, if it simply threw out the rules barring past drug use and focused instead on preventing on-the-job impairment. They've already eased up on their restrictions before: no one who used marijuana more than 15 times could be hired before the FBI changed to its current policies in 2007. What drugs someone chooses to use has nothing to do with their trustworthiness or love of country, and we'd all do well to stop pretending it does.

Of course, reforming their drug policies alone won't bring a flood of talented, cannabis-using programmers to the FBI, NSA, or other federal law enforcement agencies. Compensation would need updating to allow for more merit pay to reward the most prolific hackers so they aren't scooped up by the private sector. An end to the use of anti-terrorism surveillance measures to target low-level marijuana traffickers, as the latest Snowden revelations detail the NSA and DEA collaborating on in the Bahamas, would also be a step in the right direction. Protecting whisteblowers who expose injustices, rather than treating them as threats, would be two or three steps. But if it wants to stay strong enough to fight constantly-evolving dangers in the cyber world, the FBI should implement these reforms and start recruiting the talent it had mistakenly passed over before.