Today's solid jobs report shows that private employers have added jobs every month for five straight years. Unemployment has dropped sharply, though it has room to fall further. To herald a truly healthy labor market, however, labor force participation should be higher -- it fell in February as more people stopped looking for work than found jobs -- which will mean a larger share of Americans should have a job, fewer people should be working part-time because they can't find full-time work, fewer people should experience long spells of unemployment before finding work, and wages should be rising faster. 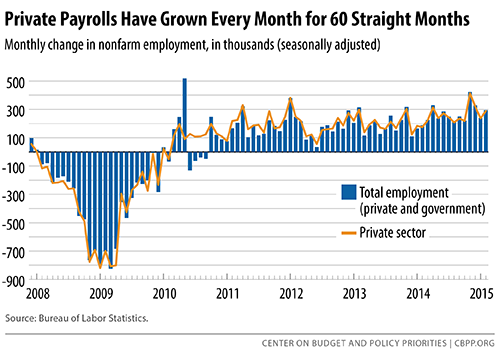 At 5.5 percent, the unemployment rate is still 0.5 percentage points higher than at the December 2007 start of the recession. No one knows for sure how low the unemployment rate can go without triggering inflation concerns among Federal Reserve monetary policymakers, but both they and the Congressional Budget Office believe there is still room for a further decline.

The official unemployment rate does not include people who want a job -- and in many cases would likely have one in a stronger labor market -- but have not looked recently enough to be considered in the labor force and officially unemployed. Labor force participation fell sharply in the recession but then continued to fall through 2013, before stabilizing in the past year. Falling labor force participation offset the drop in unemployment and kept the share of the population with a job from rising as the economy improved. Participation edged down in February, taking back some of the large rise in January.

The potential labor force participation rate has likely fallen since the start of the recession as the leading edge of the baby boom generation has begun to retire. Most analysts, however, believe that stronger demand for goods and services would not only reduce unemployment -- including long-term unemployment (27 weeks or longer) -- but also raise labor force participation. It should also reduce underemployment of people who are now working fewer hours than they would like.

Finally, stronger demand should put more pressure on employers to raise wages. Private-sector average hourly earnings before adjusting for inflation have grown at a fairly steady 2 percent per year for the past five years (and showed little change in February). Consumer price inflation has been much more volatile over that same period but, on average, has grown only a couple of tenths of a percent a year more slowly, meaning real wages have risen very little over the period. With many more job seekers than jobs, employers have faced little pressure to raise wages.

Job creation is proceeding at a good pace, and unemployment and underemployment are falling, but wage growth has been anemic and far from what would indicate an overheating economy. That means the Federal Reserve should stay patient and let the labor market continue to heal before starting to raise interest rates.

About the February Jobs Report