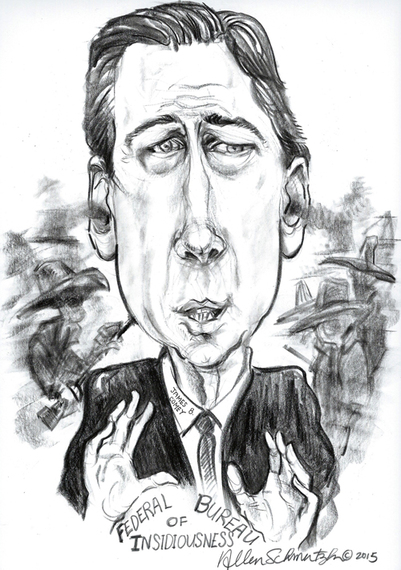 FBI Director, James B. Comey has a theory that is correct, but only in part because his clarity is obscured by his self-serving perspective. He is the Director of an agency that has a culture of disdain for activists, a pitiful record of subversion, insidiousness, illegality, conspiracy, disregard for constitutional rights, and has no shame in its legacy of operating from its own hidden political agenda. Let us never forget nor forgive the concerted efforts of the FBI's secret war against the Free Speech Movement, Doctor Martin Luther King, and too many other citizens who acted on the very legality of the freedoms our nation was founded on. Officials using crime statistics for advantage is nothing new, cooking the books on crime statistics is nothing new, and, never actually having true and honest crime statistics to report is nothing new. We are going to have to redefine what "crime" is first, and secondly, require honest bookkeeping, but more on that later.

So yes, Director Comey, I agree, there is a "chill wind" blowing across the land but for whom is the frost effecting? Another national dirty secret is out. We have seen enough visual evidence to pull the curtain back and expose an epidemic problem in the homeland. America has a crime problem and a justice system that is antiquated and broken. The "chill wind" has inflicted reticence everywhere, not just in how police officers do their job, but as well in how the public responds to police doing their job.

There is a "Ferguson effect," but it is across the social strata. The public is concerned over alleged crime rates on the rise, whether that is accurate or not, but the public is always concerned about crime. That is a perception issue, as in the tsunami shift of the public now more likely to view police officers behavior as appearing "criminal."

I get it, police officers do not want to get out of their car and confront a public armed with smart phones in hands held up cocked and digitally challenging them. Well guess what Mr. Director, no one wants to get out of his or her car any more. It's dangerous and can be unhealthy. Whose camera is going to catch whose camera catching what criminal behavior and whose camera is going to be the judge to settle the ambiguity?

While President Obama and his Justice Department debate in front of political cameras with the Federal Bureau of Insidiousness also in front of political cameras, folks are increasingly not just packing weapons and smart phones, but also wearing diapers out of fear while they drive and or walk down their streets. We must come clean on our long ignored broken system. Just maybe, crime rates if they are in fact on the rise, comes from a perception that from the elected class down to the enforcement class, corruption, which is a nicer word for crime which is usually classified very differently than crime from the underclass, is on the rise, and therefore, from a growing sense of deviance everywhere, folks just feel emboldened to join in on the trend. Now, how's that for a "theory?"

To claim that the "Black Lives Matter" movement and advocacy for righting an insidious justice system is killing police officers and killing their desire to passionately do their job is nothing more than a calculation to once again attack groups or ideas that do not fit law enforcement's culture. The clarity between the good guys and the bad guys has gotten lost in the "fog of the war on crime," as has the definition of crime and the meaning of justice. Recent comments by James B. Comey are highly offensive and slanders earnest attempts to fix a broken system. It is time for retraining, retooling and rebuilding cultural values in our vital agencies dedicated to keeping law and order. I remain highly skeptical of any "theory" on crime and crime rates. The "broken windows theory" of crime prevention broke when law enforcement lost the moral high ground and when the public's understanding of the thin blue line between the perpetrators and the enforcers blurred.

Let us remember some basics so as to have a more productive conversation on the "crime problem in America." Crime has no universal definition. Generally, when actions are taken that violate established rules of a society a crime has been committed. No crime in one society at a given time under defined circumstances is universally agreed upon as being a crime. Out of a desire and need to establish security to self-perpetuate, every society has invented mechanisms, dedicated resources and empowered folks to define and "police" unwanted behaviors, when and how to fight each, and when and how to take action against the perpetrators. How a society explains and manages crime, partially by reporting statistics to justify enforcement actions and secure enough credibility, respect and fear does define in a big way the quality of life of that very society. But we must accept that crime statistics are inherently wrong due to the prejudicial societal labels used to define crime by the power elite and that crime statistics are always used as a political weapon.

Now that the camera is finally turning on bad enforcement behavior and for the first time in my 62 year life there is a greater likelihood of police officers being indicted for crimes, let us not lose the stomach for a fair and balanced acceptance that bad apples exist everywhere, that the war on crime needs to be recalculated, that historical prejudices still linger from and toward all classes of Americans, and push back at public agencies such as the Federal Bureau of Insidiousness that live off of taxpayer's monies and are too quick to blame the folks they serve.