I'm not one who usually criticizes the Federal Reserve's ideas or policy. This is an organization that is filled with some really bright people who have a very thorough understanding of economics and the economy. However, the Federal Reserve does have an underlying policy that makes little to no sense. Regarding inflation, the Fed focuses on core rather than total inflation. Below I will explain why this is a a bad policy idea and how this policy is damaging the middle class.

Here's how the policy has played out for the duration of this expansion. According to the Bureau of Labor Statistics the average hourly pay of production workers was $14.74 in November 2001 when this expansion started. Pay increased to $17.28 in May 2007 for an increase of 17.28%.

Now, over the same period, the total inflation rate increased from 177.4 to 207.28 for an increase of 17.22%, making the total inflation adjusted pay gains of production workers .01%. In other words, 80% of the population isn't making any more money now than they were when this expansion began.

But using the core rate, everything looks fine. For the duration of this expansion, the core rate increased from 188.1 to 210.316 for an increase of 11.81%. That would make the core-adjusted gain of production workers salary 5.42% -- which is great if you don't happen to buy food or energy.

For example, here is a chart of the year over year change in core inflation for the last 5 years. 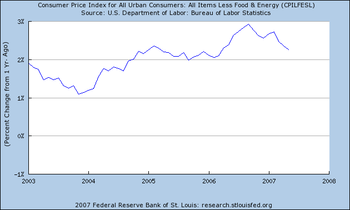 For the Fed's perspective, this chart indicates they don't have to increase interest rates. Core prices are coming down and everything is fine.

However, consider this chart which is the year-over-year change in energy prices for the last 5 years: 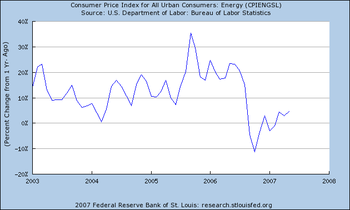 There was some serious energy inflation for the last 5 years. While it dipped at the end of last year, it is once again on the rise. Currently, oil is over $70/bbl and while gas prices have come down, we are still at high levels. In other words, a vital expense in today's economy has been increasing at high rates, yet this increase does not enter the Fed's inflation calculation.

In addition, consider food prices. Here is a chart of the year-over-year change in food prices. 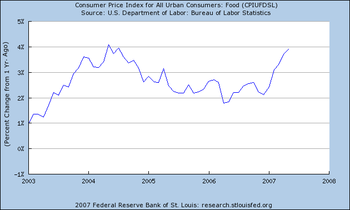 Notice how these prices are spiking right now. (Also note the agricultural price charts below which indicate food prices have been rising for the last two years.) Yet these price spikes aren't entering into the Fed's inflation equation. 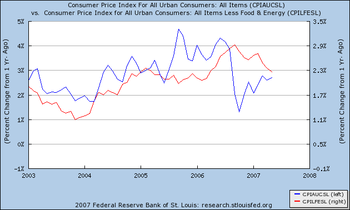 World oil and gas supplies from conventional sources are unlikely to keep up with rising global demand over the next 25 years, the U.S. petroleum industry says in a draft report of a study commissioned by the government.

In the draft report, oil-industry leaders acknowledge the world will need to develop all the supplemental sources of energy it can -- ranging from biofuels to nuclear power to oil extracted by unconventional means from the oil sands of Canada -- to meet soaring demand. The surge in demand is expected to arise from rapid economic growth in such fast-developing countries as China and India, as well as mounting consumption in the U.S., the world's biggest energy market.

I address this point in a bit more detail on my blog but the short version is we have strong technical and fundamental reasons to expect higher energy prices for the foreseeable future.

Finally, consider these charts of various agricultural and energy futures. Prices are obviously increasing, yet these price increases are irrelevant to the Fed's inflation calculation.

So -- what is the implication of this policy of targeting the core inflation rate? The Federal Reserve is not addressing the increasing inflation that is eating away at pay. Food and gas prices are a necessity -- and they are prices that people have to pay every week. As these prices go higher, people will cut back on other purchases which slows overall economic growth.

If the Federal Reserve were targeting total inflation rather than core, they would have to raise interest rates further, possibly causing a recession. And that is something the Fed does not want the responsibility for. The core argument gives them an easy out.

The bottom line is the Fed is targeting the wrong inflation rate.

For economic commentary and market analysis, go to the Bonddad Blog