"I've got the best eater!" a new mom gloats. I don't even have to ask how old the child is, as I know he's under 2 and a brand new eater.

"My kid is so picky, I can't get him to eat X." When I hear this, I also don't have to ask the age as I'm pretty certain the child is somewhere between 2 and 6.

"I can't believe my Jake is trading lunches -- he used to be such a good eater." Of course this is the school-age kid and the challenge of outside influences.

By the time the independent teen years come, I usually don't hear anything. Instead, it's more like a frustrated eye roll because many parents give up on feeding.

All these parents are making the same feeding mistake. I should know, because early on in my feeding career I made this same mistake too.

Trouble when I least expected it

I entered mothered very confident in what I would feed my daughter. I knew how good breastfeeding was for her and admittedly had a touch of arrogance about my plans. Then my baby girl came into the world and she didn't like to breastfeed. In fact, she wasn't very good at it.

I charged ahead, hiring four different lactation consultants. Feeding her was a drag for her and me. I felt like I was forcing her to latch and suck, and our not-so-fun sessions went on for almost an hour. When her growth slowed, I supplemented her with pumped milk in a bottle.

When she was just 7 weeks, she refused to breastfeed and I was devastated. I was learning a very painful lesson: the reality of feeding my child was vastly different from the theory of it. Even though I was taught that "breast milk is best," I wasn't prepared for how hard it was going to be and what to do if things didn't go as planned.

During those emotional weeks, I scoured breastfeeding books and the Internet for solutions to my daughter's odd suck, only to find advice that made me want to scream: "If it hurts you're not doing it right."

After my daughter stopped breastfeeding, I pumped milk full-time and actually started enjoying feeding her. Each day I still offered her my breast, but it was a no-pressure, playful kind of thing. Then, when she was the ripe old age of 4 months, the most miraculous thing happened: she started to breastfeed.

Getting caught up in my version of the story

The feeding mistake I made early on, one that many parents make without even knowing it, was viewing feeding from my (adult) perspective, instead of from the eyes of my child. No wonder my daughter chose not to breastfeed -- the whole atmosphere was completely negative. Babies want to form an attachment with their parents, and my drive to get breast milk into her at any cost was getting in the way.

While every parent wants to take credit for the older baby who eats everything, it's actually to be expected as growth is at its highest and little minds are still developing. Instead of gloating, parents can get busy taking advantage of this stage by feeding a variety of food (not bland baby food) and bringing little ones to the table.

And most toddlers aren't picky eaters as a result of what parents do or don't do; they just aren't growing as fast, and naturally become skeptical of new foods. Forcing, catering and bribing only make this already lengthy stage last longer. 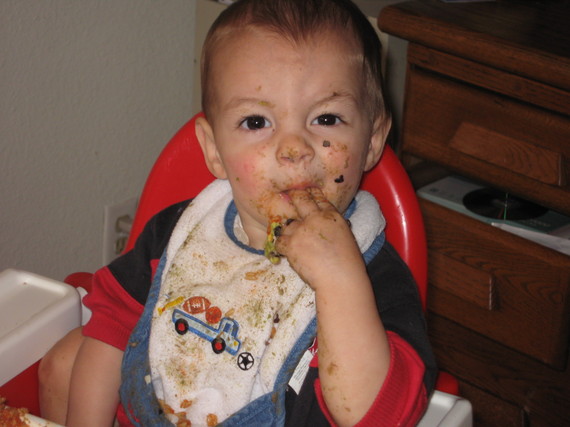 School-age children aren't trying to be a pain asking for their friend's food (or trading lunches); they simply want to belong, and that drives their food decisions. At this stage, children need help managing outside influences, and parents can help guide them and balance out things at home.

Last but not least, despite how teens act, they need their parents more than ever. Without enough support, they won't make good food decisions, and that dieting they experiment with could turn dangerous. Keeping those family dinners going, encouraging an open dialogue around food and letting them loose in the kitchen is important.

Seeing feeding from your child's perspective

Most parents don't know that children aren't supposed to have eating all figured out by the time they are in grade school. It takes 18 long years, about 28,000 meals, for them to learn about food and to become good eaters (and more time to refine after that).

The whole dynamic of feeding changes when parents learn to see things through their child's perspective. It not only helps them become more confident feeders, it ends the blame game.

In my book, Fearless Feeding, my coauthor and I help parents understand what's going on with development and growth, which helps explain food-related behavior at every stage. Knowing your child's unique food personality also helps.

So when I start getting frustrated with a particular food stage, I realize it has more to do with me than my kids. I make a conscious effort to put myself in my kids' shoes. They don't have the experience with food that I have. They don't think like me. And their tastes are still evolving and their bodies still growing. But food is fun for them -- they are exposed to a variety and they are happy eaters. That alone tells me I am doing my job.

What about your child's eating frustrates you the most?