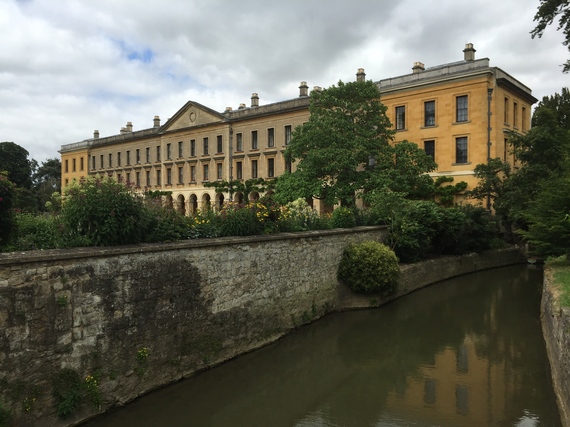 This summer, I lived for five weeks in Oxford, where the influence of the Inklings -- the group of Oxford writers and thinkers including J. R. R. Tolkien, C. S. Lewis, Charles Williams, and Owen Barfield -- remains visible everywhere you go. Whether you see their pictures in The Eagle and Child, one of their regular haunts in town, feel their presence as you walk along the Thames to The Perch or The Trout, two of their regular haunts out of town, or pass the New Building at Magdalen College, where The Inklings met for evening readings in his rooms, the Inklings are as omnipresent in Oxford as Lewis Carroll's Alice.

The Inklings have left their footsteps outside of Oxford as well. Their two best-known members, Lewis and Tolkien, are writers who continue to be admired and imitated, thinkers whose work is studied and considered, and teachers who have shaped students both in and out of the classroom. Tolkien was one of the best-selling writers of the Twentieth Century, and the world he created, Middle-Earth, has been depicted in six blockbuster films. Lewis's writing on faith has become required reading for many American Christians, while his Narnia stories for children have been read and passed on to children and grandchildren. Though less well-known, other Inklings have also shaped the contemporary worlds of religion, literature, and academe; perhaps no single group of writers has had more lasting influence.

The Fellowship: The Literary Lives of the Inklings by Philip and Carol Zaleski is the latest work to tackle the literary and cultural legacy of this group, although they join a long line; the selective Inklings bibliography included at the back of The Fellowship runs to twenty-five pages. Their book is perhaps the most-in-depth biography yet written on the major Inklings. It's also filled with plenty of insight into Lewis, Tolkien, Charles Williams, and Owen Barfield as individuals. Recently I had the opportunity to speak with Carol Zaleski for Patheos, and she clarified for me why she and Philip decided to take on such an oft-considered subject:

What we brought to this study that is not found elsewhere is our personal appraisal of the Inklings' literary legacy and spiritual and cultural significance; we present this appraisal in the context of a synthetic vision of the narrative arc of these four extraordinary lives-a vision that took shape over many years as we combed through the primary sources, their letters, diaries, reviews, essays, works of historical and philological scholarship, fictional writings, scribblings and drawings. Our aim, above all, was to produce an engaging and entertaining literary account of these four scintillating minds (bodies included).

Often when a writer enters into a biography, the subjects become less admirable the more closely they're aproached. Despite some of the revelations the Zaleskis make about their subjects that other biographers have avoided-for example, Williams' very real interest in the occult-the Inklings were, on the whole, subjects who rewarded further study. As Carol Zaleski explained,

As writers, they were not always paragons of style; cloying elements, false archaisms, labored allegories mar even the best works of these writers. They were great storytellers, but not great poets. As human beings, they had their foibles, too; Charles Williams was particularly (and paradoxically) strange. But their closets, as far as we could peer into them, were relatively skeleton-free; they were impressively decent men, for the most part free of excessive vanity and literary pretentiousness; they were faithful lovers, generous to strangers, honorable friends. It may make for less sensational copy, but there is something cheering for a biographer in writing about a twentieth-century literary coterie that did not go in for massively destructive patterns of behavior.

One of the most formative experiences for Tolkien and Lewis-perhaps the formative experience-was their time in the trenches during World War One. As we think about hundred-year remembrances of that conflict, its effect on the Inklings, both individual and as a group, is worth our notice. Carol Zaleski notes that

Lewis has remarkably little to say in his memoir Surprised by Joy about his experience at the front, but we know that it haunted his dreams. The profound extent to which Tolkien was shaped by his war experience is well known, thanks to John Garth's Tolkien and the Great War and Janet Brennan Croft's War and the Works of J.R.R. Tolkien. Not only their own harrowing wartime experiences, but the loss of intimate friends, scarred Lewis and Tolkien permanently and redirected the course of both their lives. Indeed all the Inklings, and their whole generation, suffered wounds from the two world wars that Americans, as we think back to those times, may not fully appreciate. The tremendous losses made the prospect of fellowship (in particular, male camaraderie) all the more inviting.

The Inklings lived in a society that became successively less Christian-a society that more and more resemble our own-but they offer some hope for us in our own fragmented culture. As Carol Zaleski argued, although the Inklings found it possible to support each other and create a shared space where each individual's work was recognized, that ecclesia did not simply grow out of monolithic beliefs. "Religiously, they were far from homogeneous: Tolkien was a devout Catholic, Lewis an ecumenically-minded Anglican, Barfield an Anthroposophist, Williams an Anglican mage. That they could find common ground, or make common cause, despite undeniable tensions and disagreements, is an encouragement to those who care about ecumenism." These stories of ecumenical progress permeate the book. The Fellowship chronicles, for example, how Lewis's brother Warnie, long anti-Catholic in his beliefs and feelings, began to shift and change as a result of the compassion of individual Catholics he encountered.

The Inklings were men who had seen the worst the world has to offer, but who wanted to offer, in contrast, something higher, a vision of a reality we only sometimes glimpse that is as real as any horror, and more eternal. Carol Zaleski summed up the great gift of The Inklings in this way:

We read, Lewis once said, because "we seek an enlargement of our being. We want to be more than ourselves. . . . . We want to see with other eyes, to imagine with other imaginations, to feel with other hearts, as well as with our own." All literature offers us this gift-it takes us out of ourselves-but mythopoeic literature has a particular power to make spiritual realities imaginatively plausible. That doesn't mean that religious people need or wish to live in a dream world, lulled by compensatory fantasies. Far from it! If the Inklings succeeded as writers it was because they wedded realism to hope and fantasy to reason.

The Inklings were involved in a great enterprise, and to a larger degree than they might have imagined possible, they created something lasting and important. As the book puts it, "their great hope was to restore Western culture to its religious roots, to unleash the powers of the imagination, to reenchant the world through Christian faith and pagan beauty." (5) Because they worked largely in fantastic realms, in fantasy and science fiction and faerie, the Inklings were able to approach many real-world issues obliquely, without, as Lewis once put it, "waking the sleeping dragons of reason," to deal with faith, war, technology, and many other contemporary concerns. The Fellowship does an admirable job of capturing why the Inklings mattered--and of arguing for their ongoing relevance. 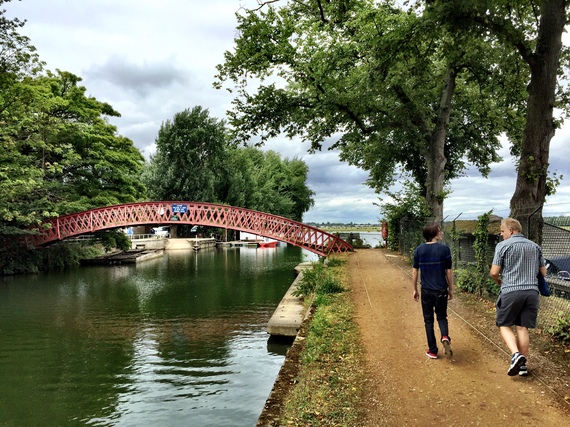 The author, on the Thames Path on the way to The Perch.
Photo: Zane Wilemon