When most people hear the phrase 'female alpha' they think of the most attractive, powerful or domineering woman they know. However, female alphas are not so easily recognizable. They might be beautiful or bossy or authoritative, but this is not what defines them. 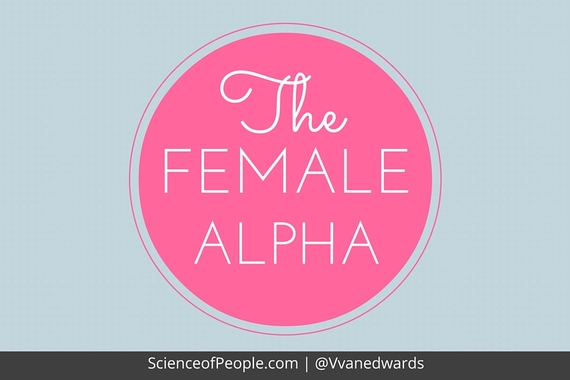 The easiest way to spot a female alpha is in a room or group of females. You can easily figure out who the alpha is by observing the following female alpha phenomena:

Next time you are at a party or networking event, try this fascinating experiment: Find a group of three or more females --you do not need to be close enough to hear them, they should just be in your line of sight. Put a five-minute timer on your phone or watch and take note of the direction of the women's feet. Almost always all of the women point their toes towards the person they are most interested in or who they feel is leading the group's tempo, even if that woman is not talking. This is because research shows that we unconsciously point our feet toward the most influential person in the group of people we are with.

Once you have an inkling of who the female alpha is of the group, move closer (or, if you are a woman, you can even join the circle). You will notice that the entire group is mimicking the alpha. Women will hold their body like her, they will talk in the same voice tone and other females will even laugh for the same amount of time as the alpha does. Like pointing their toes toward the alpha, women do this because their attention is focused on the alpha and studies show that we subconsciously mimic the behavior of people we admire.

By the way, female alpha behavior is harder to spot in a group of mixed sexes--males confuse the female attention spans.

3. When the female alpha leaves, a social vacuum is created.

Another way you can spot the female alpha of a group is by watching how each group member exits. When non-alphas leave the group nothing much happens--conversation continues, the gap closes and group members move-on. However, when THE female alpha (and there can only be one, see below for details) you will see something odd happen. Either conversation stops completely and female members look around expectantly for a new alpha, or the group disperses.

4. There are different degrees of female alpha-ness.

Female alpha-hood is not like pregnancy (you are or you aren't). It is more of a spectrum. Some women have a high tendency to be alpha. They enjoy social conducting, being the leader and/or the center of attention. Some women only like being female alphas in their home, but not in the business environment. Some women are only social alphas around certain groups of friends. If you explain the female alpha phenomenon to a woman, she will most likely be able to tell you her 'degree' of social alpha-ness. On a ten point scale she might be a seven or a four, for example.

5. There can only be one female alpha per cluster.

6. There must be at least one alpha female.

Oddly, there must only be one alpha female, but there also has to be AT LEAST one. We have all experienced (whether we knew it or not) a group without an alpha female. Men would describe it as 'awkward,' 'weird,' or 'boring.' This is because in a group of women with very low female alpha tendencies no one is sure how to act, what to talk about or the social pace. Female alphas actually have the very important role of social lubrication.

There are many names for them, both good and bad: connectors, chatty, gossipers, queen bees, leaders, bossy, self-centered, the life of the party, social and control freaks.

We have very little awareness of how important and how much we do in fact rely on female alphas. They bring social ease to a group, they tell jokes, they start conversations, they introduce people, they smooth over business disagreements and take charge. The reason we depend on female alphas, not male alphas, in social situations so much is because females have naturally higher levels of oxytocin, the bonding hormone. As leaders, this drives most females to use their influence to connect other people, making them the glue that holds groups together.

8. We are groomed to either accept or become female alphas.

In the book. "The Female Brain" by Louann Brizendine, she discusses the evolutionary and biological importance for females to get along and keep harmony in a group. From a very young age girls are taught--far more than boys, to share, cooperate and play fair. Girls get very good at reading other's emotions and adapting to the tone of a group. Female alphas actually make it easier for a group of girls to interact because there is one unspoken leader. This leader sets the tone for the group and allows girls to get along without having a power struggle.

9. Female Alphas are the top of the hierarchy.

If I had to put a label on the different most typical female roles in group settings, here are what they would be:

Nu's: The exact middle letter of the Greek Alphabet, Nu's are fillers. They provide conversation, gossip and support for the Alpha.

Zeta's: The jokester, comic relief, clown, goofball of the group. Most groups have a female jester.

Omega's: (The last letter of the Greek Alphabet) The victims, the bullied, the weaklings or the "C" in a female troika are always picked on or treated with loving condescension. (See my article on Female Troikas)

Sampi's: (An obsolete letter of the Greek Alphabet, often forgotten) The Invisibles, the forgotten girls whose quiet or shy demeanor often means they are not included or counted.