I have good news and bad news for you about what I have learned, as a 36-year-old undergraduate, about the state of gender and equality on the college campuses of America.

The good news: Feminism, in theory and practice, is living and thriving; feminists, on campus, are talking.

The bad news? Some of them are very, very angry.

And I can't figure it out.

All this time, you see, I thought I, too, was a feminist. I thought I, too, spoke in a voice brimming with 150 years of suffrage and hard-won right to choice. I thoughy I, too, made my own choices with confidence and self-awareness.

All choices, all equal.

But just a few months ago, I was sitting in an English literature class at the college I attend, just your average 36-year-old junior trying to understand 20th century literary genres. I don't know how the discussion spiraled out of control, but I know that I was caught in it's downward corkscrew.

We were discussing a woman in a novel who told her daughter that sometimes waiting patiently for what you want is better than throwing a tantrum or making a big scene. Essentially, the mother would not buy her daughter a candy bar when the daughter cried and screamed for it. The next time they went to the store, the daughter did not even ask about the candy and her mother bought it.

"How would you look at this story through the lens of gender? Through other lenses? Thoughts? Concerns?" asked our professor.

A young woman across the room rose her hand. "It's horrible. No one should tell a little girl that she can't speak her mind. It is anti-feminist. How can we tell girls to sit quietly and not ask for what they want, and expect them not to be oppressed?"

Her friend nodded. "Feminism is about teaching girls that they need to speak up, that they should use their voice to get what they want."

I rose my hand then, unsure of what I would say but knowing I had something burning a hole in my tongue.

"There's that. Yes. But I'm a mother. If every time we went to the store, my daughter OR my son threw a tantrum about wanting something, I would tell them all to be quiet. Let's put gender aside for a moment. We can't teach any child that kicking and screaming and entitlement is a means for getting what they want. One person's needs shouldn't supersede every one else's. Sometimes you have to wait your turn -- woman or man."

The two young women turned and stared at me with angry, angry eyes.

Clearly, to them, I was wrong.

But what I have heard, time and time again, from young women at school, hinges on two principles. First, that women must make a certain prescribed pattern of choices to be considered a feminist. And second, that to be a feminist, you must believe you are entitled to more than everyone else.

And, simply put, if that is how we have come to define feminism -- I don't get it.

And after spending time on the college campuses of America, it feels as though it is not even just men that are discussing or placing the limitations or judgement upon women anymore.

It's now young women doing it to one another.

Are we helping each other, giving one another room to find their own "feminist" ideal? Or are we policing each other, waiting in judgement for each other to make the choices we think undermine our own? Is there really only one specific set of feminist choices? How is this progress? It seems like a whole new set of limitations on our gender, ones that seem to be stemming from within.

Listen, I don't really think about feminist concepts everyday. I might go months without talking about how they are defined, how they are manifested in life. They aren't that important to discuss in my little space because I am living them as ingrained elements of my world. I raise up my daughter like I raise up my sons, expecting them to work hard and be kind. My expectations for each of them are based on their ability not their gender -- my daughter can take 10th grade geometry at 12, my son was a late bloomer and struggles with math.

If I listen to some of the voices at school, the voices of the women, the girls a decade or more younger than me -- I would believe that I am not a feminist because I made "the wrong choices". I chose to get married, to have a baby at 22. To be a stay at home mom. To make my husband dinner sometimes. To let him make me dinner sometimes. If I write about loving him -- I am not a feminist. If I put him first, or my children first sometimes -- I am not a feminist. If I tell my daughter she can not have a candy bar if she throws a tantrum, I am silencing the voice of feminism, when all I am really silencing is her belief that whatever she wants, she can get by throwing a fit.

Before I went back to school, I knew, that in the truest sense, I, too, was a feminist. And I won't be shaken from that belief.

And I also believe, that...

If I tell my daughter to stop asking for an iPhone (for the 400th time), am I really telling her that her voice should not be heard? Am I marginalizing her? What would I be teaching her about feminism if I gave it to her, with the message that everything you ask for you, you should have?

Listen: Feminism is important. But it is not everything. And I do not feel hope, if the future of feminism hinges on usurping all other ideals.

I value those things most of all. That's my choice. I understand if this doesn't work for everyone. But it's my feminism, too. My choice, too.

And I believe in honoring choices, all choices, for every woman -- even if they aren't in line with what I would choose. Even if I believe they contradict my own definitions of womanhood. Of motherhood.

Because that is where feminism is truly borne. 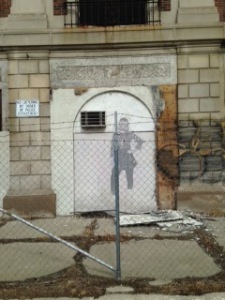