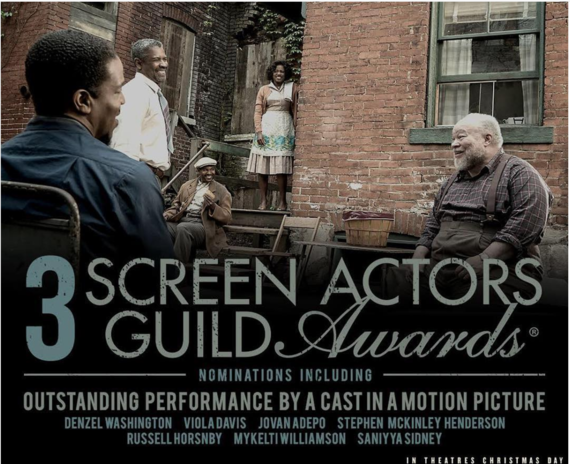 My favorite film of the year is "Fences," with a screenplay by the late August Wilson, based on his Tony and Pulitzer award-winning play. It stars many of the actors who appeared in the acclaimed 2012 Broadway production, including Denzel Washington, who plays former Negro League baseball player Troy and also directed, and Viola Davis, who plays Troy's wife, Rose.

It was a thrill to get a chance to talk with four of the stars of the film, Stephen McKinley Henderson (Bono, Troy's best friend), Mykelti Williamson (Gabriel, Troy's brother, disabled by a WWII injury), Russell Hornsby (Lyons, Troy's older son), and Jovan Adepo (Cory, Troy's younger son).

Williamson on the respect and care that goes into playing a character with cognitive impairment:

The cognitive issue is TBI, which is Traumatic Brain Injury. On a scale of 1 to 100 it depends on how you are affected some people at 15 percent, some at 12, some 42, and so on. So you have to tell a story so I was actually led by the Holy Spirit to play it the way I played it. August Wilson's words were the guide but it took a lot of prayer and a lot of love and respect toward other people to create the human being that you see on screen. Injured people -- that's somebody's child too. They have a mother and a father, and they're capable of being loved and of loving somebody. That's what our trueline was; it was love, and so that's what you see. Denzel told us, "Show us the love, whatever that means to you." That's what you saw, that's why this is such a powerful love project from each one of us.

The first scene where Gabriel shows up I came in there to give my brother hell, to make him feel horrible about his behavior and put pressure on him. He's trying to maintain, trying to control this son, he is trying to control the son he was never there for. I was trying to bring the pain to Troy so that pressure would help assist him on his journey to go forth. When we are on camera instead of on stage we could be much more intimate, not just in your face but in your heart right in front of the camera.

Henderson has appeared in eight of Wilson's ten-play "Pittsburgh Cycle," one for each decade of the 20th century. He spoke about the joy of Wilson's language, both familiar and poetic.

I always say my misspent youth was preparing me for this poet playwright. By misspent youth I mean going to theater schools and working on Shakespeare, working on Sophocles, working on Moliere and Chekhov and all the poet playwrights. And so then to have this one come along with a song in my key with our culture, that was really quite something. And to have listened to the elders the way he did because you have to know your elders, you know the grandparents, know your great-grandma. I knew my great-grandmother and one of her friends and so hearing them talk and hearing uncles talk and going to the pool hall and going to the barbershop, all of that is pre-searched, researched and pre-searched, and having those rich words, with that whole legacy of all the great playwrights but also your own ancestors because it's Pittsburgh but it's also Kansas City, it's also Detroit, it's also Toledo -- it's a neighborhood and all the cities but Pittsburgh is where he listened. And so to do it and do it there, to film it there in Pittsburgh, having done the plays on the various stages across the country but then when it comes to filming it, to be in Pittsburgh, walking the streets where he walked and hearing the voices he heard and hearing his voice sometimes, that language is exalting. It's elevating and yet at the same time it's family. It's the words you heard.

The more time you bathe in the play the cleaner you get with it and the more it become yours, your words. What I cherish is the fact that I did have the play in my life that long because I had years of regional theater and have been exposed to the play over a period of time and it really is amazing. It's a part of the culture, this play. They study it in school. It's quite something. To be the work of not some other culture but my own and to know that it's for all of the students, for everybody.

Adepo described the challenge of playing a character who is a teenager at the beginning of the play and an adult in the military at the end.

I tried to create Cory's back-story that's not in the script. You want to respect the material, you want to stay within and use the outline that August creates for you. But the work that you are doing to create the character as a whole, you find that with the back-story that you create behind the script. So I wanted to give Corey a sense of life experience and that was something that I actually worked on with Viola. I had a couple of weeks between the last scene when I walked away from home and then coming back from the military. Viola was asking me questions like if I had fallen in love or what type of action did I see in battle or how often did I write home to her just to get my mind thinking about things outside of just what was on the pages. And I think that was what I used to create some sort of spine of what Cory had been through in those years and how that would've changed his personality and how he would react to certain situations especially coming back home for the final act.

It was amazing to see myself in the uniform. My dad was in the military as well so I was very familiar with that type of stature that the uniform brings out of a man. So it was interesting to be able to climb into that type of person.

For Hornsby, playing the part of the older son, Lyons, who was abandoned by his father, helped him to work through his own issues about not having a father.

Lyons had no father to speak of and so he wants to be helped, he wants to be told that he's loved. He wants to be just looked at lovingly and by his father especially. For a lot of men, there are father issues: you didn't know your father, your father wasn't around, or he just didn't give you the love that you felt you needed. A lot of times you don't recognize that until you look around and realize that there is a void in you which is keeping you from being able to love. You know the greatest joy of a man is just to love and be loved in return and if you don't know how to give that you are like "Why is that disconnect? Wow." My dad wasn't there and so for me it was deeply personal. I felt for the first time in my life, in my career I actually, it was cathartic and therapeutic because I brought my life to Lyons. I brought the real truth for the first time. I've lived so much life in the six years since we did this on Broadway. I was married longer, had my own son, brought a life into this world and so you realize that in order for you to move forward you have to let go. So that became a part of the experience. So Russell realized what he didn't have, what he didn't get all the time we were in rehearsal, the scenes with Corey and Bono, I was not realizing that that was me letting go.

And I recognize that's not what an actor is supposed to do. I didn't do the work I'm supposed to do because it became so real. And so once Denzel, and he is a genius, said to me "Just take care of your brother. In that, in taking care of your brother," he said, "you let go." That's essentially what he was he saying. "Okay now you've got through it, move on, so let go." I didn't realize that that's what had happened until that moment. It's learning you can't move forward until you let go, I have to impart to him to say, "Hey, no, no, no, whatever it is you're holding onto it's not going to serve you. Whatever resentment feeling you are having about our father it's not going to serve you because it didn't serve me. It's going to hurt you in the long run," I'm evidence of that and so that's August allowing us how to live. That's what he wrote. These are real people, three-dimensional people that he heard and saw and put on page and so you have to embody that in putting it into the work so that it lives.