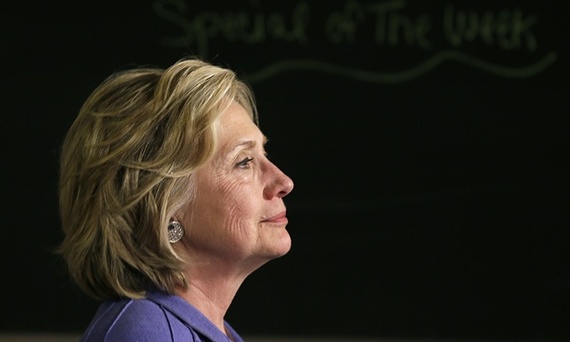 My latest opera, The New Prince (libretto by David Ignatius), charts Niccolo Machiavelli's quest to impart his lessons on the politics of hard truth to leaders across the centuries. From 16th Century Florence to the year 2032 in a meta-kingdom called Amerasiopia, Machiavelli chronicles the recursive lessons of history as embodied in a wide variety of world-shaping figures. Back in February of 2016, I sat down to compose the following passage, a duet between Bill and Hillary Clinton. I had no way of knowing the resonance it would have eight months later.

"From this joyful mountaintop of celebration we hear a call to service in the valley. We have heard the trumpets. We have changed the guard. And now, each in our own way and with God's help, we must answer the call."

These words were spoken by Bill Clinton in his first inauguration speech. The tone of the first president to be elected in a post-Cold War atmosphere of openness is filled with boundless optimism. America and the world, on the brink of the 21st Century seemed like a place where anything could happen. Freed from the specter of nuclear holocaust, the impossible could finally be made to be possible.

Just over two decades later, the world is breathing a very different air than that heady euphoria of the first Clinton inauguration. It is in our atmosphere of international insecurity that Hillary Clinton delivered her concession speech. Common wisdom tells us that failed presidential candidates languish into obscurity. Not so for Hillary Clinton. This is partially because of her unusually visible and defining role in American public life for decades. But it is also because of what her loss represented: the symbolism of it and the symbolism that the woman herself has now taken on.

I'll never forget the first time I encountered the force of Hillary Clinton. I was a little boy glued to the TV, fixated and deeply fascinated by an old clip of a young lady who took on a U.S. Senator by speaking of a resistance to apathy and cynicism. She spoke of the Civil Rights Movement and the moon landing; about urgency: "Fear is always with us but we just don't have time for it. Not now." And she spoke about politics as "the art of making what appears to be impossible, possible."

This young lady had a steely fire in her eyes that I would become intimately familiar with over the years. It never left her. It turns out that the art of transforming the seemingly impossible into the possible was not catchphrase for Clinton. It really was an art and, like all arts, it required a mastery of technical craft in order to be realized. Rather than become inured into a dysfunctional and oppressive system, Clinton learned how to engineer the fine details of the machine. She didn't simply speak of change but also labored to perfect the techniques required to effect it. And, ironically for a figure who has been vilified and caricatured as untruthful or distant, she never lost the sense of defiant compulsion to tell the truth no matter the obstacles.

That same spirit was present when, at the last minute, she turned away from a discussion of economic policy in Reno and moved on to dissect the racist and misogynistic ideologies that have infected the body politic of America today.

Her passion doesn't crudely reach for the gut. It reads like a diamond formed out of effervescent heat to forge an endlessly stable, controlled and tempered virtue. An indestructibly strong rock. And in this sense, the key to Hillary Clinton is not in the lines that I set in the duet that ring from a joyful mountaintop of celebration but in the passage that immediately precedes it: a passage that speaks of defiant resilience.

As she emerged to deliver her concession, dressed in conciliatory purple (that's what you get when you mix red and blue), she reassured young women and girls that they are valuable and should not lose heart. My own heart sank when I heard these words and realized that they needed to be said in the year 2016.

But then she echoed the words spoken at the cusp of our new millennium. These words, reinvigorated in my mind from having set them to music eight months ago:

But at that time, I had no way of knowing that they would be echoed as a powerful recapitulation.

Things began to crystalize in my mind as the pieces of the puzzle came together. I remembered how, on Election Day, I was walking down the street with an older friend of mine; a crusty national security type (non touchy feely) person. We looked at our phones and saw the news showing a livestream of thousands of people flocking to place their "I Voted" stickers on Susan B. Anthony's gravestone. In an uncharacteristic moment, we both start crying. I walked away from the concession with that feeling of lost opportunity and pride in my mind and a renewed commitment to solve this riddle.

Then, a week later, while speaking at an event to benefit the Children's Defense Fund, Hillary Clinton brought it home for me it for me as she invoked the words of Dr. Martin Luther King Jr. as often recalled by Barack Obama: "The arc of the moral universe is long but it tends toward justice."

The act of suffrage was not over.

There have been discussions ad nauseam attempting to explain all the feelings and rationalizations for why Hillary Clinton lost the election. But beyond all that there is the more objective fact that she won an election if we were to judge it by the votes of human beings. But she lost according to our system which relies on an antiquated vestige from the 18th century; ironically, a system that was devised to grant more power to slave-states so that their disenfranchised could passively offer the convenient power of a vote to their overlords when it was needed. To be perfectly clear, those "disenfranchised" were slaves and women.

If you want an optimistic view of America that also happens to be true then acknowledge the fact that Hillary Clinton earned more votes than any presidential candidate in history bar Barack Obama in 2008. What does it say about America that the two most objectively popular candidates in the history of the country happen to be a black man and a woman?

The presidency would have been a logical development for Hillary Clinton after serving as First Lady then on the Senate Armed Services Committee then the Senate Foreign Relations Council then two terms as Senator from New York and finally Secretary of State. But think about it. If she won the election, she would simply occupy an office. Now she has transcended the office into something larger. She's become an icon that circumvents politics and moves beyond the office of presidency or any of her previous work. She has become part of our story and legend. Much like Dr. King.

And just as Barack Obama invoked Dr. King, the art of possibility crystalized the next chapter in our book of social transformation: a future in which our first female president will speak of forcing the spring by transforming politics into the art of making "what seems to be impossible, possible."

I am very thankful to have worked on behalf of this smart, empathetic and deeply generous woman; a woman who understands that true leadership must have at it's heart a profound commitment to service.

I know many feel a sense of fear and insecurity moving forward. I see the long game. Just as Phoenix rises from the ashes, I remember that a renaissance, by its very definition, can only be a rebirth if it follows the end of a dark age.

So, as I renew my commitment to widen my field of vision, I see that we are in fact on the precipice of a great reawakening. And, as has always been wise, I will give Hillary Clinton the last word:

"It is often when night looks darkest, it is often before the fever breaks that one senses the gathering momentum for change, when one feels that resurrection of hope in the midst of despair and apathy."