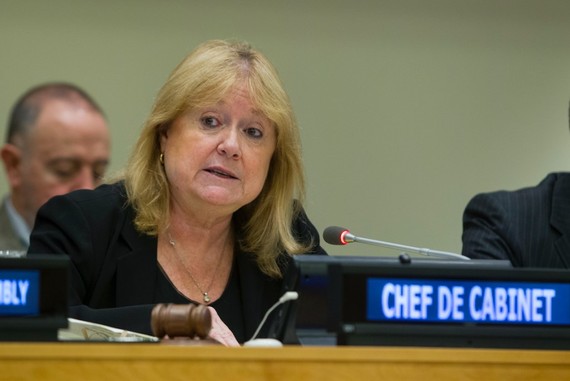 Susana Malcorra, Argentina's foreign minister and a former high-ranking UN official, is one of the latest candidates to run for UN secretary-general. LOEY FELIPE/UN PHOTO

The second crop of campaigners making a pitch to replace Ban Ki-moon in January is now being assembled, and it looks like the first declared candidate on the list may well shake up the race. She is Susana Malcorra, Argentina's foreign minister and a well-respected, internationally known former United Nations officia
.
The next round of candidates to appear before an audience at the UN and the general public via webcast is scheduled for June 7; besides Malcorra, the other candidate speaking that day is Miroslav Lajcak, foreign minister of Slovakia.

More candidates are expected to join the race: among them Kevin Rudd, a former prime minister of Australia, and Christiana Figueres, the Costa Rican who piloted a global agreement to combat climate change through a tension-filled conference of world nations in Paris last December. So far, no African candidate has been proposed from the continent.

These latecomers among possible candidates may be counting on the General Assembly to hold a third public hearing later in June or in July, by which time the Security Council will have begun weighing the qualifications and level of support among influential nations. A decision on a final nomination by the council may not be reached until late August or September, diplomats say.

Meanwhile, Malcorra has been presenting herself as a candidate with wide appeal and a broad résumé. She has been deputy head of the high-profile World Food Program, chief of UN peacekeeping field support operations and, most recently, the secretary-general's chief of staff. Before that, Malcorra had 25 years of experience in the private sector, including top positions at IBM and Telecom Argentina. And she is a woman in a year of much lobbying to end the domination of men in the secretary-general's chair, which no woman has ever held.

If the schedule holds, Malcorra will get a chance to make her case to the world on Tuesday. A first round of candidate appearances took place in mid-April, when nine spoke and answered hours of questions in the first-ever open campaign, a step taken by the innovative current president of the General Assembly, Mogens Lykketoft of Denmark. Four of the nine candidates were women, all but one from Eastern Europe.

Malcorra's not coming from Eastern Europe, a region that has been demanding its "turn" in the office, may not find this an insurmountable stumbling block. The candidacy of one Eastern European man, Danilo Turk, a former president of Slovenia and UN assistant secretary-general for political affairs, has been favorably received in numerous quarters. But he is a strong human-rights advocate and international law expert, which may not play well among many of the UN's 193 member states.
Other regional candidates have not generated as much enthusiasm. They are Irina Bokova, a Bulgarian who is director-general of Unesco; Natalia Gherman, ex-foreign minister of Moldova; Vuk Jeremic, a Serbian politician and former General Assembly president; Srgjan Kerim, a media businessman and former foreign minister of Macedonia; Igor Luksic, foreign minister of Montenegro; and Vesna Pusic, a former foreign minister of Croatia.

From outside the Eastern European region, Helen Clark, a former prime minister of New Zealand and now administrator of the UN Development Program (UNDP), and António Guterres of Portugal, a former prime minister and until recently UN high commissioner for refugees, have also declared their candidacies. Both are from the regional group known as Western European and Others (WEOG).
Clark, originally a front-runner, is apparently losing some support because of reports circulating about her autocratic handling of UN Development Program staff members and the severe job cuts she has made to bolster her management skills.

It is the Security Council's job, under the UN Charter, to select a candidate and send that nomination to the General Assembly for a formal vote. Despite Lykketoft's bold reforms, there is no guarantee that the council will choose from the list of openly declared candidates. The normal procedure involves backroom geopolitical deals in the 15-person council, especially among its five permanent members, Britain, China, France, Russia and the United States.
At the moment, there are still differences among them not only about candidates but also about timing of the council's decision -- possibly put off until September -- and whether the applicants will be interviewed or whether straw polls will be used to test opinions.

Additional candidates, besides Rudd and Figueres, may join the race now that Malcorra is officially in. Other names are being floated most often by outsiders. Two prominent ones are Germany's chancellor, Angela Merkel, who does not want the job, and Kristalina Georgieva, a Bulgarian who was sidelined when Bokova was formally nominated by the Bulgarian government.

Georgieva has good credentials. Now the European Commissioner for budget and human resources, she has been a vice president and corporate secretary at the World Bank as well as its director for strategy and sustainable development. Those who see that the final choice could come down to a deal between the United States and Russia point to her three years as World Bank director for the Russian Federation from 2004 to 2007.

Jeffrey Laurenti, who has written about and analyzed the UN and international affairs for the United Nations Association of the USA and the Century Foundation, described his sense of where the selection process stands and where it may be in flux.

"As Angela Merkel's domestic political situation in Germany has stabilized, the always long-shot prospect that she might be the super-trifecta candidate -- a politically heavyweight East European woman -- has all but vanished," Laurenti said. "Susana Malcorra's entry into the race probably provides the coup de grâce to the notion of East European entitlement to the U.N.'s top job. She has deep U.N. experience as both chief of staff and head of field operations for U.N. peacekeeping, which almost none of the East European aspirants can match, save Danilo Turk.

"Like Helen Clark, Malcorra is well known among UN delegations, without the negative electricity generated around Clark by her efforts to change the bureaucratic culture of UNDP," he said in an email interview."As an Argentine, Malcorra can pose as both a candidate from the developing world and one comfortable in the West-a neat straddle that Pope Francis has shown can work. And, of course, she is a 'she,' at a time when Western governments in particular would like to join women's groups in making this year's selection historically special. We'll see whether Malcorra will pass Moscow's and Beijing's litmus tests, but there's no obvious reason why she wouldn't. The principal casualty of her emergence would likely be the long-established presumption of regional rotation."